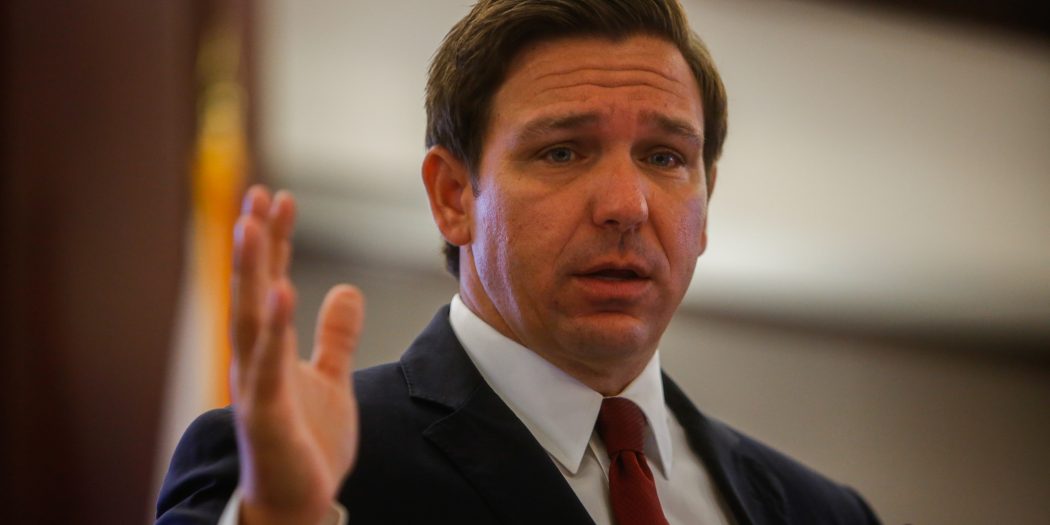 By Everitt Rosen and Dana Cassidy

The chilly reception in the Republican-controlled Legislature signals difficult policy battles for some of the GOP governor’s signature proposals for 2020.

In remarks to journalists in the Capitol, DeSantis touted a “year of the teacher” that included raising the minimum salary for teachers in Florida to $47,500 per year. The governor said that would elevate Florida to near the top in the United States, behind New Jersey, and make it easier to recruit new, high-quality educators worried about surviving economically while making a living in the classroom.

DeSantis also endorsed a Senate proposal by Republican Sens. Tom Lee and Joe Gruters to require employers in Florida to use the federal E-Verify online system to confirm that prospective employees are legally eligible for work in the U.S. under immigration law. About two dozen other states require use of the system. Immigration enforcement is a key policy initiative for Republicans ahead of the 2020 election.

But Senate President Bill Galvano threw cold water on both ideas. He said the Legislature anticipated budget deficits on the horizon and wasn’t sure Florida could afford the minimum salary figure DeSantis proposed for teachers.

“We can’t make a commitment to a specific number,” Galvano said. He said that given the option of funding teachers or prison reform in Florida, people with disabilities would continue to be his priority.

“He does not like spending money on anything,” DeSantis said of Oliva.

The top Democrat in the Senate, Audrey Gibson, called the governor’s plan “a proposal that leaves many still wanting.” She said teachers’ salaries haven’t kept track with inflation and that rare bonuses for educators are disproportionately taxed and difficult to build into a household budget with any reliability. “We anxiously await the governor’s funding plan,” she said.

Likewise, Florida’s teachers unions have asked for more money for raises for more teachers and said the governor’s plan doesn’t go far enough. DeSantis dismissed those criticisms as partisan: “I’m a Republican. They’re not. Don’t pretend politics is not part of this,” he said.

Galvano also expressed skepticism about the governor’s E-Verify plan, saying it was a difficult issue for the Legislature. He notably did not endorse the bill, SB 664. “The case will have to be made,” he said. “I can argue both sides.”

Gibson, the Democrat, called the immigration proposal “not good for our state.”

Florida’s agriculture commissioner, Nikki Fried, said the new immigration requirements would disadvantage small farmers with burdensome paperwork. She is the only Democrat serving in the governor’s Cabinet. Noting that a similar bill failed in the last legislative session, she said it “was a problem last year and will be a problem this year.”

The remarks by Florida’s top political leaders came during legislative day, an annual event organized by The Associated Press when they announce their most important priorities for the upcoming legislative session.

Secretary of State Laurel Lee said Florida has completed efforts to identify vulnerabilities in the state’s election systems. She declined to say exactly what problems turned up, saying that would help America’s adversaries. But she told Fresh Take Florida that two discoveries surprised her: Election officials trusting default settings in software and failing to install important updates to protect operating system software. She said experts will continue to look for problems. “There is no finish line,” she said.

Attorney General Ashley Moody said she will prioritize protecting Florida’s children from addiction to nicotine by targeting vaping companies that are targeting minors with flavors such as Captain Crunch, cotton candy and bubble gum.

“I refuse as attorney general and a mother to sit back and watch the next generation become addicted to nicotine.”

Moody stressed the Legislature must take action to determine which flavors should be allowed, institute a two-factor age verification system, prevent targeted advertising and marketing toward minors and allocate funding for education campaigns such to juveniles that demonstrate the dangers of nicotine.

Galvano said he supports HB 265, which would require physicians to receive parental consent before performing an abortion for a minor. The bill was voted favorably out of the Health and Human Services Committee October 22 and sent to the House for a full vote.

DeSantis, who was captain of his baseball team at Yale, again expressed support for the bill by Democratic House leader Kionne McGhee that would allow college athletes to earn some compensation from licensing their names or likeness. Galvano said he wasn’t convinced: “I have my own reservations to allowing college athletes entering the realm of professional athletes,” he said.

A day after the Florida Republicans announced its annual fundraising dinner would be postponed, Governor DeSantis said Tuesday that President Trump will be the keynote speaker at the Statesman Dinner December 7.

Tongue-in-cheek, DeSantis also took credit for popularizing the chicken sandwich from fast-food chain Popeye’s, whose headquarters is in Florida. The governor said he wanted chicken sandwiches while preparing for Hurricane Dorian in the state’s emergency operations center but couldn’t find them during or afterward. He pledged to eat one when Popeye’s reintroduces them soon.

“You’ll probably see me in the near future having a Chick-Fil-A and a Popeye’s side-by-side,” he said, “and doing the ultimate taste test.”