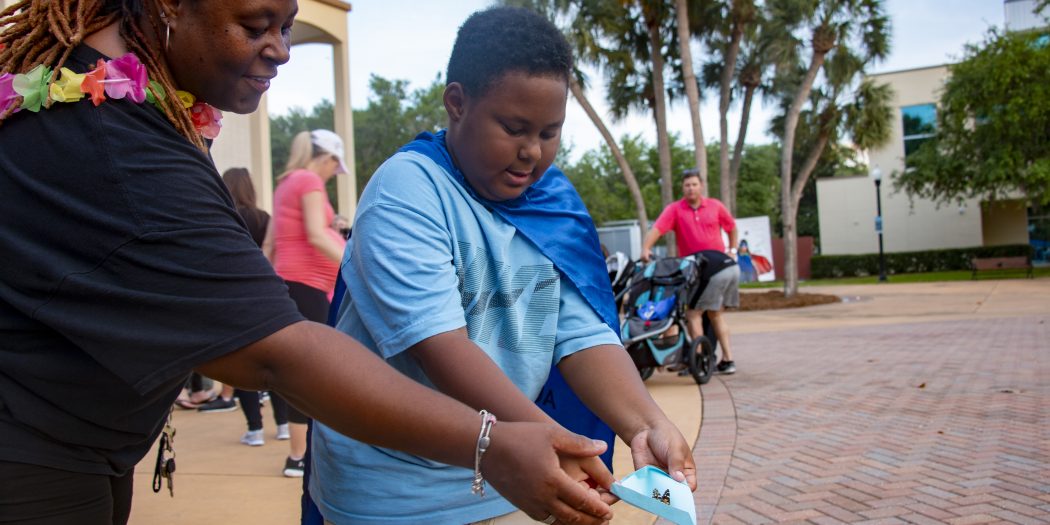 Laurie Tandy helps her son Braylan Tandy release a butterfly after the 4th annual Be You! Walk for Children’s Mental Health. Nearly 100 people released butterflies into the air in downtown Ocala as the sun began to set. (Shelbie Eakins/WUFT News)

Ten-year-old Braylan Tandy patiently waited in line for a balloon animal as his bright blue cape fluttered in the wind. On the back was a clear and simple message: autism speaks.

It is because of children like Tandy that nearly 100 people gathered at Citizens Circle in downtown Ocala for the 4th annual Be You! Walk for Children’s Mental Health on April 4. The event, put on by the Centers, aimed to bring awareness to the many children in Marion County who struggle with mental health issues and disabilities.

According to Monique Haughton, the mission advancement coordinator at the Centers, bringing awareness has to be a community affair.

“Stigma is really an issue and it really prevents people from actually reaching out for help,” Haughton said. “I think things like this are really important for the community because we all feel the same way.”

Steve Blank, the chief operating officer for the Centers, said many people don’t realize that children often suffer from the same challenges with mental illness that adults do.

“You hear a lot of things about adults suffering with mental illness, but the fact is there are thousands of kids in Marion County who are suffering from mental health issues,” Blank said. “Last year there was over 3,000 children that were baker acted in Marion County.”

Staff at the Centers is committed to bringing that number down. One way they combat that reality is through their critical response initiatives, including a mobile response unit and a 24-hour crisis hotline.

“You can call us,” Blank said. “We would get some information in regards to what’s happening and give you some direction as far as where to go from there.”

The Centers also has a hand in combatting the opioid epidemic through education of children and families.

“More and more there are children who are born addicted or families who are at risk of losing their kids due to them being addicted,” Blank said. “We’re going into their homes and working with the entire family unit trying to educate them and work around some prevention and treatment to keep families together.”

Ocala Police Department officers created a walking barricade as the group made their way down 2nd Street, many sporting colorful face paint and balloon swords.

Ali Snavely walked among them while wearing space themed leggings and a rainbow cape.

“It’s so exciting to see everybody so passionate about participating in such a great cause,” Snavely said. “It’s just a really great energy. I’ve met a lot of really nice people.”

As someone who works in the call center at the Centers, Snavely was inspired to show up for the kids.

“I believe really strongly in the cause, so I got really excited to participate,” Snavely said.

For parents like Laurie Tandy that support is indispensable. As the mother of Braylan, who is autistic, having events that lift up children who are different is important.

“I just came out to help out and do what I can and make awareness,” Laurie Tandy said.

After the group finished the walk, they returned to Citizens Circle for a butterfly release.

Laurie and Braylan Tandy smiled as they carefully released their butterflies into the air in solidarity with the many children and their families who struggle with mental health issues.

“We need more awareness for all disabilities,” Laurie Tandy said. “That was my main reason for coming out tonight.”