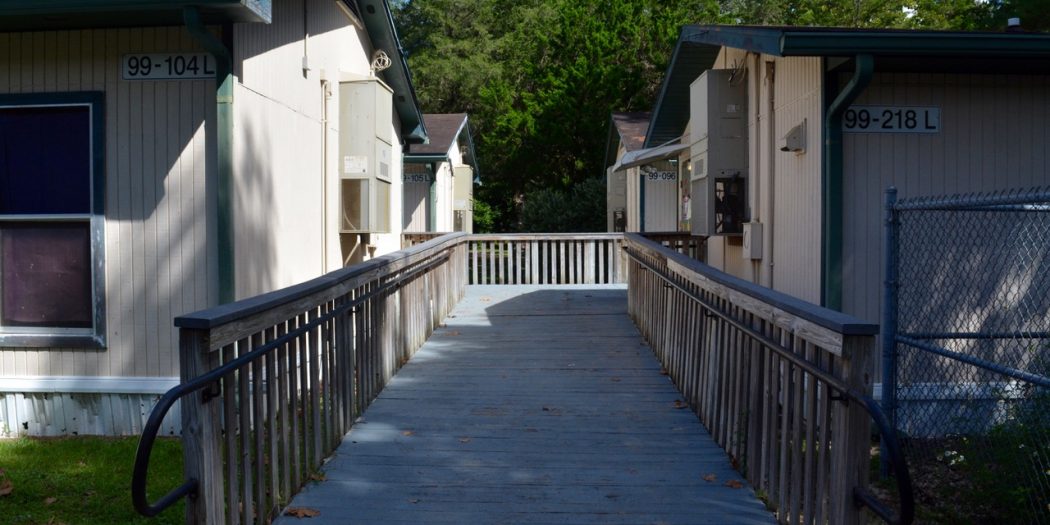 Littlewood Elementary School is using 13 portables to combat overcrowding. If the half-cent tax referendum passes in November, the money would help fund construction of a building. (Christina Morales/WUFT News)

The district maintains that state lawmakers have cut funding for local schools to improve facilities by $168 million over the last 10 years. A lot of the district’s schools are out of date and have maintenance issues, said Jackie Johnson, the district’s public information officer.

Facilities are just one of the topics on the agenda at the “Making Our Schools Everyone’s Priority” forum set for 9:30 a.m. Saturday at Gainesville High School. The Education Foundation of Alachua County, the Education College Council, the League of Women Voters and the Alachua County Council of PTAs are sponsoring the forum.

If voters approve a half-cent sales tax referendum on the ballot in November, the county would reap an extra $22 million annually each of the next 12 years. The measure would cost families around $5 more a month, according to the school district.

“What we’re looking to do is see if the community is willing to invest in our school facilities, in improving them, so that we have a high-quality learning environment for all our students in all of our schools,” Johnson said.

Bishop Middle has no air conditioning in its gymnasium, and until recently none in the band room, a teacher’s classroom and the cafeteria kitchen, Principal Michael Gamble said.

The 56-year-old middle school also has multiple leaks in its roof, furniture over 20 years old and rundown classrooms, Gamble said.

Fourteen buildings would be knocked down and rebuilt – at a total cost of about $16 million, or about 70 percent of what the district would get in revenue from the tax for one year, he said.

“It’s not chump change at all,” Gamble said. “It could really go a long way.”

Littlewood Elementary is over capacity with 710 students in a school built for 580, causing staff at the 59-year-old building to use 13 portable classrooms, Principal Justin Russell said.

“We try to take pride in as much as possible and put Band-Aids to make it better,” Russell said.

Eight buildings at Littlewood would be demolished and rebuilt and five others would be renovated, Russell said of what the school would do with money generated from the sales tax. The stretch of portables would be knocked down to make one larger building, he said.

Modernizing these classrooms would provide teachers with extra tools that they need to reach the students who are most in need, Russell said.

“I think that having a comfortable learning space is huge, especially for students who traditionally struggle,” he said.

“If this half-cent sales tax doesn’t pass, there is no Plan B,” Korithoski said. “I don’t know where the money is going to come from to repair our facilities.”

Christina is a reporter for WUFT News who can be reached by calling 352-392-6397 or news@wuft.org.
Previous Students Protest New UF Graduation Ceremony
Next Afternoon News in 90: Sept. 21, 2018

WUFT News spoke with five principals across North and North Central Florida and found the trend of growing stress holds firmly in the Sunshine State.