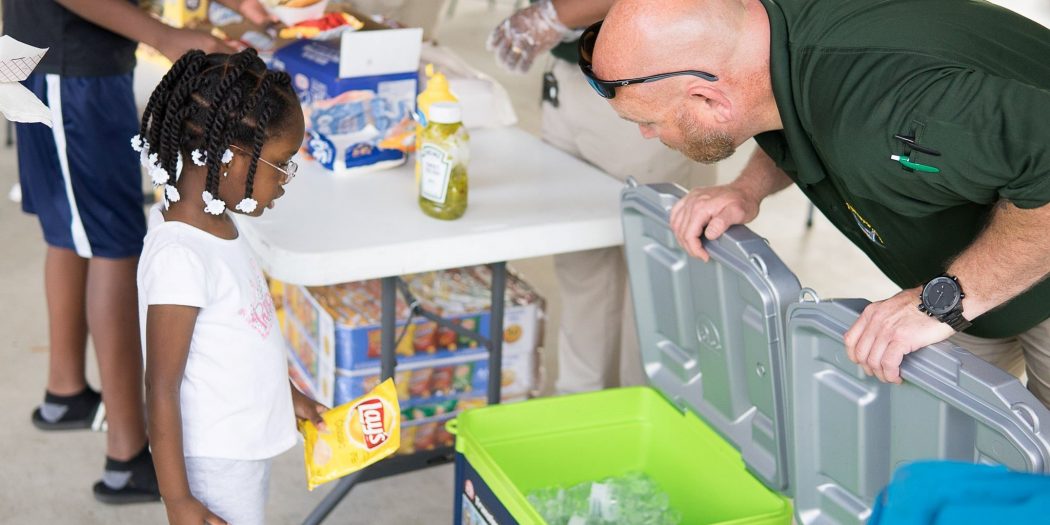 Officers Promote Literacy In The Community

Tamar Jones is in charge of utility billing for the city of Archer, but he also wears a second hat.

Jones takes on extra hours to plan recreational events for the city. Archer hasn’t had a recreation department for two years, so everyone has to pitch in.

“Us as staff are pulling together to wear multiple hats in our small office to make sure we have something going on for our youth here,” Jones said.

Books and Burgers, a literacy program run by the Alachua County Sheriff’s Office Youth and Community Resource Unit, is helping Jones’ cause. Officers go to different elementary schools and parks to grill burgers and hot dogs, hand out books and spend time with kids and parents.

“It’s a step in the right direction,” Jones said. “This worked right into one of our core, key components of what we want our future Archer to look like.”

Jones said the city’s most recent Books and Burgers at Maddox Park brought out 50 to 75 people, a big crowd for Archer.

Carlos McWatters, one of the deputies who organizes Books and Burgers, said the response has been positive. Families aren’t used to seeing officers out relaxing and spending time with their children, he said.

The sheriff’s office has brought Books and Burgers to Waldo, Newberry, Archer and Hawthorne. Recently, they held an event at Lake Forest Elementary School in east Gainesville.

“What it’s for is to build relationships with the kids and have them trust us, and it also builds trust in the community with the parents,” McWatters said. “We want them to see we’re people underneath the uniform.”

Books and Burgers has been around for almost two years, but the sheriff’s office recently started partnering with the Friends of the Library in Gainesville in order to gather books for young adults, too.

In the last month, the Friends of the Library has already donated about 300 books to the sheriff’s office, and they plan to continue donating after their book sale ends on April 26.

Friends of the Library Book Sale Volunteer Liz Jones said they were more than willing to help promote literacy in Alachua County.

Tamar Jones said illiteracy isn’t necessarily the biggest issue in his city, but he sees Books and Burgers as crucial to developing the education of Archer’s kids.

“We definitely want to instill that early in them,” he said. “We want to go ahead and start helping them out, making it fun for them instead of something they don’t want to do.”

Deputy McWatters said literacy is a key element to a child’s future success.

“We tell the kids all the time, reading is a huge part of everything that you do every day,” McWatters said. “We [also] take books out there for the parents to take home.”

Tamar Jones said Book and Burgers is ultimately important because of the positive impact it’s making on Archer.

“We’re trying to jumpstart our recreation again, trying to get the excitement and the blood flowing again back into the veins of Archer,” Jones said.

The next Books and Burgers event is scheduled for May 18 at Shell Elementary School in Hawthorne.

Austin is a reporter for WUFT News and can be contacted by calling 352-392-6397 or emailing news@wuft.org.
Previous In Photos: A Safe Haven For Horses
Next Philippe Cousteau Jr., On His Family’s Legacy And Steve Irwin’s Death