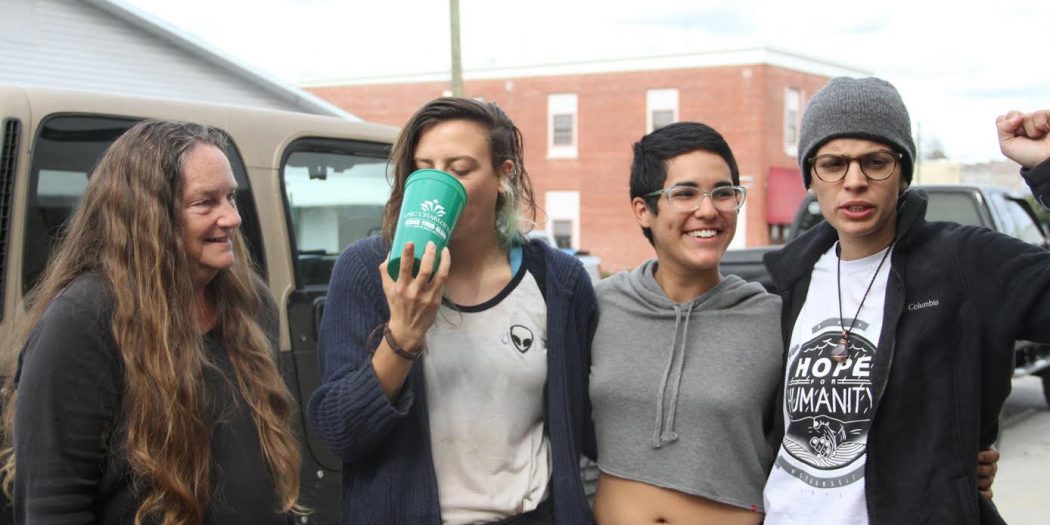 Sabal Trail pipeline protesters who were arrested Monday have been released from the Suwannee County Jail where they were being held overnight.

Kaithleen Hernandez, Abigail Mills, Annette Gilley and Alexa Oropesa were all released around 12 p.m. Tuesday from the jail.

The group was protesting the construction of the Sabal Trail pipeline, a 515-mile pipeline that will run through Alabama, Georgia and Central Florida and will cross more than 700 bodies of water. The pipeline, which has not been completed, has already become a cause for concern for some Floridians.

Many of the protesters were members of Sacred Water Camp, an encampment focused on protecting clean water. The members of the camp call themselves “water protectors.”

Of the eight protestors arrested Monday, six were members of the camp and charged with misdemeanor trespassing. Hernandez and Oropesa, who both strapped themselves to the bottom of a truck during the protest, were two of them.

Hernandez remembers Monday’s protest as a beautiful event and said the group started the morning off in prayer and was focused on protesting in peace.

“We didn’t show any resistance, we were just there trying to make a statement and bring awareness to this subject,” Hernandez said. “It was an honor (to do so) on Martin Luther King’s birthday, it was beautiful.”

Hernandez and Oropesa originally intended to strap themselves to a water truck, however, they ended up strapping themselves to the bottom of the truck that had the drill on it intended to drill into the ground and lay the pipeline.

“It was a huge success,” Hernandez said. “What we did instead had a bigger impact.”

Abigail Mills, a self-declared water protector who was also arrested Monday, said she knew being in the system was a negative thing but said she went in with a clear conscience.

“Putting myself in a position where I’m gathering a record doesn’t mean anything to me because I know I did it for the right reasons,” Mills said. “Being in there, I had a clear conscience because I knew that I did the right thing and I was there because I was standing for something I believe in.”

The women were greeted by a large group of fellow protestors who had been waiting hours for their release.

Kevin Rodengen, another member of Sacred Water Camp, waited for the protesters along with the rest of the group and said he was excited to buy them a drink once they were released.

Rodengen and the rest of the group said positive things about the law enforcement officers involved and said police handled the matter gracefully. The group of protesters did say they found the arrests to be unlawful as the group was protesting peacefully and complying with the officers on the scene.

Officials at the Suwannee County Jail declined to comment on the arrests.

Gaby is a senior at the University of Florida, studying Journalism. She is a reporter at WUFT news and can be reached at 786-270-7423.
@Gabytrod
Previous Health Officials Begin Medical Marijuana Rules Process
Next Official Says Pulse Shooter’s Widow Has Been Arrested

Joe Biden will become the 46th president of the United States on Wednesday, having defeated Donald Trump in an acrimonious, divisive election last November.