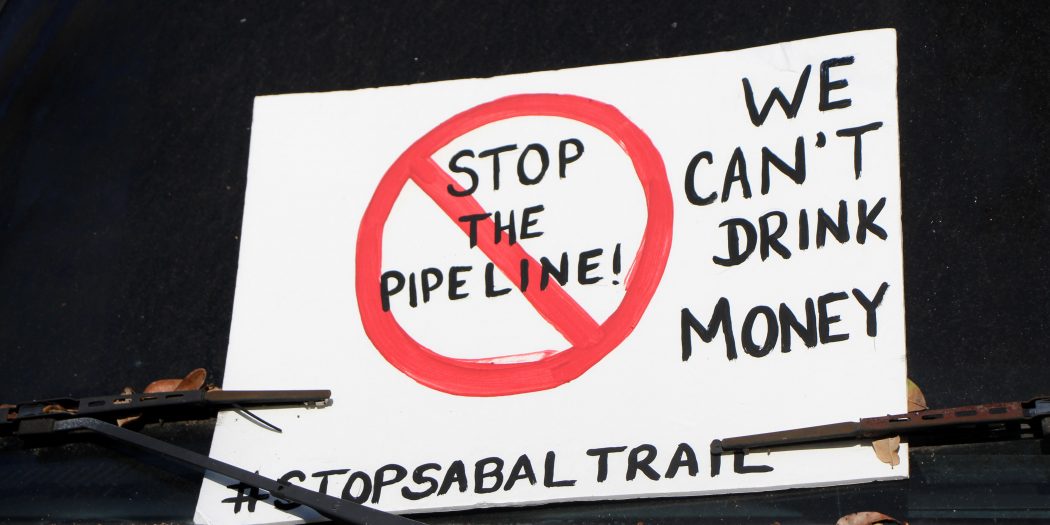 A Sabal Trail Pipeline protest poster in 2016. Two protesters against the pipeline lodged themselves deep inside it today in Marion County. (File/WUFT News)

Residents of North Central Florida are up in arms over the construction of both the Sabal Trail and the Dakota Access Pipelines. Over the past week there have been protests against the construction in Alachua, Levy and Gilchrist Counties – some even resulting in arrests.

On Saturday, the Sabal Trail protest at the Gilchrist County construction site ended in the arrest of 14 protesters. One of them has locked himself to the tanker truck delivering water to the site.

According to The Gainesville Sun, Cara Jennings, an opponent of the pipeline, said that with the exception of the one person, all of the other protesters were following the Sheriff’s orders – yet everyone was arrested.

Much of the concern over the pipelines comes from concern for the damage that pipeline leaks can cause to the water supply in the area. The Saturday protest occurred at the site of the construction under the Santa Fe River.

On Tuesday, a protest was held at the corner of 13th Street and 43rd Street in Gainesville for the Dakota Access and Sabal Trail pipelines. According to Karrie Ford, the director of the protest, some protesters were arrested while on the ground praying.

Over 1,000 people in the Gainesville community have expressed interest in the protest.

“A lot of our voices are very loud and very clear,” said Ford. “We don’t want this pipeline here in our home.”

And on Wednesday, Residents of Bronson, in Levy County, gathered at the home of Robin Koon to protest the construction occurring on his property, and to support him during this difficult time.

The protesters were not only upset about the environmental damage being caused to the water supplies and the trees being torn down, but also about the destruction of Koon’s land which holds the remains of his loved ones.

“Now that all the trees and shrubs are going to be gone, every time it rains, or there’s a good hard rain, my property is going to be washing down further into the pond. My loved ones ashes are right there which means they’re going to wash away now. Sabal Trail has not kept their promise.”

According to Koon, their initial promise did not involve coming so close to his home.

Some of the protest sites have off-duty deputies that were hired by private entities to act as security.

“We’re trying to balance the interests of the public and the interests of the private entities,” said Lt. Scott Tummond of the Levy County Sheriff’s Office. “We want to make sure that we respect everybody’s first amendment rights. They have the right to peacefully assemble and to protest what is going on in their neighborhood, and we’re not going to impede on that. However, we need to make sure that the people that are protesting follow the law.

Many other protests have been held around the nation and in Florida, with more planned for the future. For now, the protesters will continue to watch as they attempt to slow down or stop the construction.