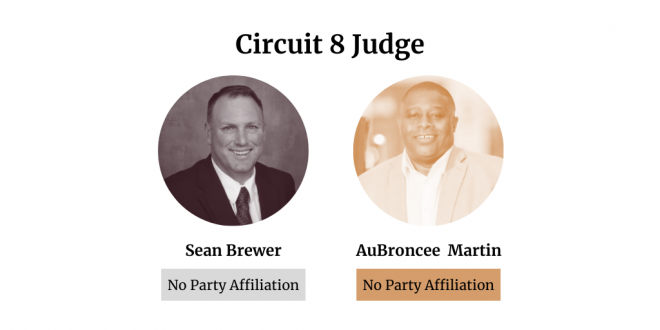 In August, four candidates sought to become the next Eighth Circuit Judge. Sean Brewer led with 38% of votes and AuBroncee Martin with 25%. Dan Weisman finished third and Nathan Skop, fourth.

Now, two candidates are left vying for the position: Brewer and Martin.

Brewer Graduated from Seminole Highschool in 1989 and moved to Gainesville where he has lived ever since. He continued his education at the University of Florida where he received a bachelors degree, a masters degree and a Juris Doctor degree with honors.

The next judge for the Eighth Circuit will be hearing criminal and civil cases including but not limited to; family law, juvenile delinquency and dependency, mental health, probate, guardianship.

“I think my connection with children and families is notable, as well as the life experience I have in that area is something that will serve me well as a judge,” Brewer said. “That would include having been a crimes against women and children prosecutor for basically my whole career.” Brewer specialized in crimes against women and children but has prosecuted crimes at all levels including domestic violence, robbery, burglary, sexual abuse, child abuse and murder.

“Some of those cases included domestic violence murder and child death,” Brewer said. He has earned several awards regarding child advocacy.

Brewer has been the top prosecutor in multiple murder cases in Levy and Alachua County. One of those being 2019 Hannah Brim murder case.

Besides his career as an attorney, he is a father to three boys, one being a student at UF, and husband to Laura Quisling Brewer, whom he met during his time at UF.

Martin has been a loyal Floridian all his life. He graduated from A&M University in Florida where he earned a bachelors degree in history. He continued his education at UF, receiving a Juris Doctor degree from Levins college of law.

Martin served 24 years as a public defender in the Eighth Circuit and currently holds the position of Felony Division Chief for Alachua County. “My strength comes from my ability to see both sides of the issue and not just on an intellectual level,” Martin said. The law is not mathematics, there is no equation to solve. Emotional intelligence is essential.”

Prior to his career as a defense attorney, Martin taught aspiring lawyers as a professor at UF’s Levin College of Law from 2012-2014.

Martin is also a father to three boys and husband to Telisha Martin, whom he has been married to for 24 years.

Due to the nature of the position neither candidate publicly affiliates with a political party.

In terms of their campaigns, Brewer takes the lead in funding and spending. “This campaign is extremely important to me because it is what I see as the next step of service for me,”  Brewer said. “Ive served as an assistant state attorney for 24 years and I have found fulfillment in all of that time, but I feel like I am at a place in my life now where I can serve in a different way; in that being from the circuit bench.”

According to state campaign finance records, Brewer has spent over $140,000 of which $115,000 was loaned from his personal funds. “I have put my own money in this campaign but I’ve also raised more money than any other candidate,” Brewer said.

Both candidates have the same mission: to continue to serve justice, fairness and equality to the people. “I believe that if you are blessed with ableness and have something to contribute, you are obligated to do so,” Martin said.

Martin and Brewer each said they have the experience, knowledge and credentials to serve as the next judge for the Eighth Circuit. At this point in the race, it comes down to the votes of the citizens of Alachua, Baker, Bradford, Gilchrist, Levy and Union counties.

“I appreciate having been entrusted to handle the serious type of cases I have over the past 24 years,” Brewer said. “What I’m asking now is for the vote of the people of this circuit to entrust me to be their next Circuit Court judge.”

Olivia is a reporter for WUFT News who can be reached by calling 352-392-6397 or emailing news@wuft.org.
Previous Meet the candidates running for Florida’s 3rd congressional district
Next The Point, Oct. 31, 2022: Antisemitic message at FL-GA game prompts UF response