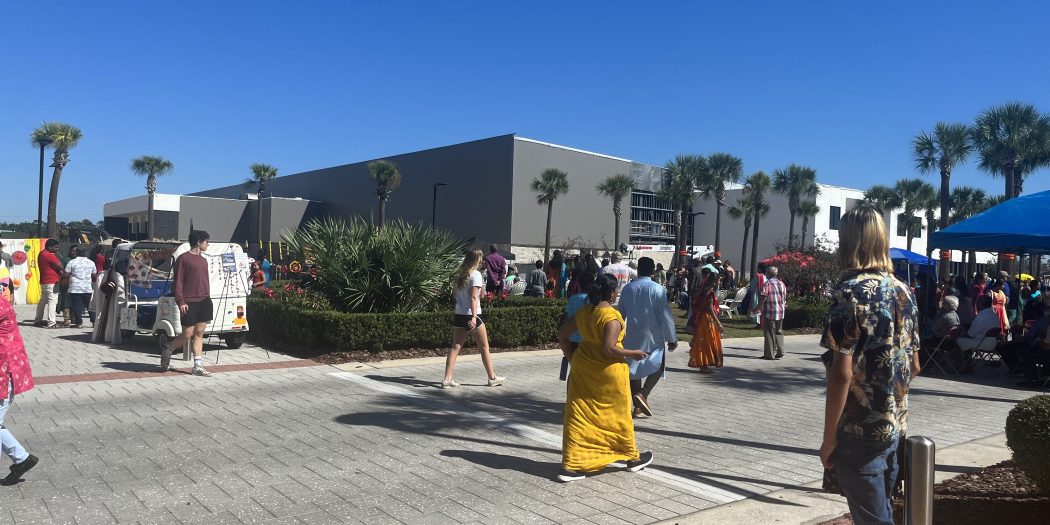 Razee Tumati (in yellow) and festival goers walking around Celebration Pointe. The night before, the area was turned into “DiwaliFest” it hosted “Chomp the Block” which is a Florida Gator football centered block party. (Keziah Moses/WUFT News)

A celebration of light comes to Celebration Pointe

As children run by in their colorful Kurtas and Lehengas, a traditional Indian sitar song plays over the jingling of their sparkling outfit adornments, while the fragrant smells of chicken tikka masala and samosas waft through the air.

More than 8,500 miles away from their original hometown for some, and just a few miles away for others, more than 1,200 people visited Celebration Pointe in Gainesville on Saturday to celebrate the Indian Festival of Light, Diwali, for the first time ever.

By the end of DiwaliFest, many attendees seemed to have found a new sense of community.

“I often think that when people do not know each other’s culture it raises more of a divide,” said Anita Gohel, one of the leading committee members of DiwaliFest. “We did this festival to bring the community together.”

Diwali, Deepavali, or Divali, as it’s known in different regions in India, is officially celebrated on Oct. 24. The Florida Indian Gators, a new group in Gainesville felt the need to raise awareness and bring the people together by educating them about Diwali and its significance and history.

The group’s mission is to preserve, protect and promote Indian culture, heritage and tradition by fostering and building relationships across several diverse communities in Gainesville.

Razee Tumati and her team came up with the idea last summer, and DiwaliFest was inaugurated.

DiwaliFest is the first event of its kind in Gainesville. It was a free, traditional Indian festival with the goal of uniting and uplifting the Indian community in Gainesville and the surrounding areas.

“Deepavali itself is the festival of lights,” said Dr. Krishnaswami Alladi, who is a mathematics professor at the University of Florida. “Deepa means light in Sanskrit and Avaali is celebration.”

“Another interpretation of Deepavali is from ignorance, you are going into knowledge,” said Alladi, “From darkness into light.”

The festival started on Saturday morning with the lighting of a traditional by Dr. Perinchery Narayan, a local urologist, and his wife Raji Narayan. It was followed by traditional songs and dances performed by members of the local Indian community.

One of the first performances was a dance titled “Alarippu,” which means flowering bud choreographed by Mathura Alladi, director of the Jathiswara School of Dance and Music.

“This is a very set, very classical, very old piece,” Mathura said. “It has been handed over through generations.”

As a traditional dance piece, “Alarippu” always has the same steps and movements. The movements of the dance resemble a blooming flower.

“It’s almost like the hands are coming out the neck along with the other subtle, simple movements the children do,” Mathura said about what the dance looks like when it was performed.

On the stage of the festival, underneath the ceremonial Diya lamp, there was a traditional Rangoli pattern on the ground.

Rangoli’s are significant, brightly colored floor designs. They are typically made with rice flour, paint or flowers that are supposed to welcome people and the Hindu Goddess Lakshmi in.

“In south India, Diwali represents the victory of Lord Krishna over the demon of darkness,” said Alladi. “In north India, it is also celebrated for the goddess of prosperity.”

A familial aspect always surrounded the festival, with proud siblings, cousins, aunts, uncles, parents and grandparents watching their loved ones perform pieces on stage such as “Prayer Song,” a dance called “Mommy and Me,” and another dance titled “Best Friend Forever.”

Vinata Vedam-Mai, director of Nrityakshetra School of Dance, attended the festival and had her students perform several dance pieces.

“My mother was my dance teacher,” she said reminiscently. “She’s from Kalakshetra, the famous Dance Institute in Madras, India.”

Some stands and booths that were set up at the festival had families with young children who were eager to help their parents connect with customers.

“This event is mostly for young people to celebrate and for the older folks to be able to enjoy time with their kids and grandkids,” Narayan said.

He said it was a nice thing to do on a sunny, fall day.

The Tikka Bowls and Tacos stand, based out of Saint Johns, Fla, served non-traditional food with traditional twists such as fried tikka masala chicken wings and chicken tikka bowls.

Freshly pressed sugar cane juice complimented with green lime and brown sugar was served at another stand, allowing attendees to stay cool from the Florida heat.

Other vendors at the festival sold different items for attendees to purchase. Drupati Rampaulsingh who is an author, sold books she’s written such as “Yoga and Beyond” and “The I Factor.” She also sold jewelry she’s brought from India at her booth.

Booths like the Sanskriti Boutique, of Jacksonville, sold items such as traditional Indian clothing and jewelry. Nearby, Emily Vij’s booth sold items such as custom wooden rounds with different mandala art, DIY charms and candles.

Traditional Indian Henna tattoos were also done at the festival by local Henna artist, Palvi Sharma and the rest of her team. Many children, and individuals who are still kids at heart, excitedly waited their turn in line.

Each Henna design was executed with the same thoughtfulness, but each tattoo was different for everybody that received one. Some got the tattoo on the palms or their hands, while others asked for it on the back side of their hands. Some even got their Henna tattoos somewhere completely different like an ankle or wrist.

Henna is mainly used in celebration of special occasions and gatherings of people. The paste used symbolizes good health and prosperity for those that wear it.

“We were in a pandemic, so I think we needed something to celebrate and bring positivity back in our life,” Gohel said when speaking about the festival.

Gohel moved to Gainesville at the start of the pandemic before an idea for a community Diwali festival had even been thought of.  So, this summer when she got the call from Razee about planning a Diwali festival, she couldn’t refuse the idea. Now, they plan on hosting the event every year.

“For me, that made it even more important that we have this celebration, ” she said.

Keziah is a reporter for WUFT News who can be reached by calling 352-392-6397 or emailing news@wuft.org.
Previous Police K9 that mauled man’s eye quietly placed back on active duty
Next Alachua Conservation Trust hosts second annual Pride at Prairie Creek