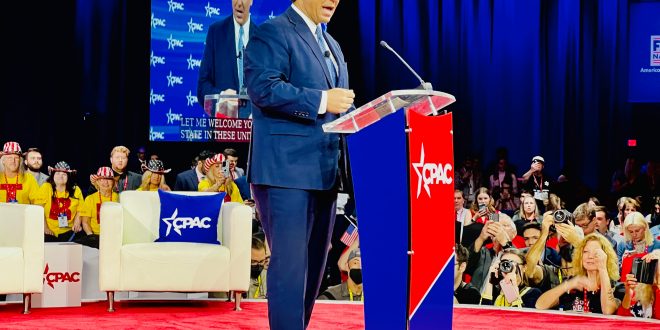 ORLANDO – Gov. Ron DeSantis inched toward the front of the stage on Thursday afternoon, throwing hats to supporters. Cheers roared as he waved to a standing ovation. Loud guitars, bright lights – the stage was set.

On the second day of the Conservative Political Action Conference, Florida’s governor delivered a pointed 20-minute speech to an energetic Orlando crowd. In his speech, he addressed a broad range of conservative political touchstones, including critical race theory, the economy under President Joe Biden and what he derided as “woke-ism.” DeSantis did not mention former President Donald Trump.

“We’ve accomplished more in this state than anyone thought possible,” he said. “I can tell you this, we have only begun to fight.”

DeSantis is considered a possible candidate for the Republican nomination for president in 2024. Interviews with conservatives at the conference found many who said they would love that – even going as far as saying they prefer him over Trump.

David Ballard, 22, a student at the University of Maine at Farmington and active with the group Maine College Republicans, said he sees DeSantis as the future of the Republican Party.

“I’m very confident in his hopefully a lot bigger and larger aspirations in politics,” Ballard said. “I think he’s the guy that we need.”

If DeSantis and Trump were both to run, he said he would vote for Florida’s governor. He voted for Trump in 2020, but said he doesn’t consider himself a supporter of the former president.

“DeSantis is, I feel, a more calming presence,” Ballard said. “He still can fire people up, but I’m not afraid about what he’s gonna say on Twitter the next day.”

Carey Keikel, 64, of Clovis, New Mexico, voted for Trump in 2016 and 2020. She also said DeSantis is what the Republican Party needs.

“I love President Trump, but he turns off a lot of people,” she said. “I’m not really sure if he would win again.”

In the governor’s speech Thursday, he criticized Biden’s handling of the economy and inflation – calling it “Biden-flation.” The economy became a hot-button issue for some attendees who consider the economy under Trump performed better.

Jason Lakatos, 39, of Miami, an osteopathic doctor, predicted that the economy will spin out of control before DeSantis has a chance to run in 2024. Lakatos is a registered member of Florida’s Libertarian Party, according to voter records – meaning he would not be allowed to vote between DeSantis and Trump if the two competed in a Republican primary.

Lakatos said he supports Florida’s governor. He criticized Trump not firing Dr. Anthony Fauci –  something that would have been difficult because Fauci was not a political appointee – over Trump’s continued support of COVID-19 vaccines, which he said was a dealbreaker for him.

DeSantis has also supported COVID-19 vaccines and encouraged people to get the shot, although he has declined to indicate whether he received a booster. Trump notably said that politicians who decline to acknowledge whether they received a booster were “gutless.”

“If [Trump] gets back, is he going to just allow these same people to kind of run the show?” Lakatos said.

Lakatos has advocated for the use of ivermectin and hydroxychloroquine treatments for COVID-19. Lakatos came to CPAC to convince DeSantis to veto a bill he signed Thursday that extends COVID-19 liability protections for healthcare providers. Under the new law, a plaintiff must prove gross negligence or intentional misconduct to sue.

DeSantis also criticized politicians who decided to impose COVID-19 restrictions and mandates. He signed his own lockdown executive order in March 2020. It directed “all Floridians to limit movements and personal interactions outside the home to only those necessary to obtain or provide essential services or essential activities.”

“​​From the very beginning, we refused to let this state descend into some type of Fauci-ian dystopia,” the governor said. “We protected people’s rights.”

DeSantis’ rhetoric of Florida being an “open state” rang true for Anthony Fanty, 65, of Jupiter, who moved from New Jersey in 2019. He expressed relief having moved to Florida and praised the governor’s handling of COVID-19.

Fanty said he supports DeSantis, but isn’t sure whether he would vote for Trump again. Both are strong candidates, and he said he can see himself voting for either one.

“That’s a decision where you couldn’t lose,” Fanty said.

This story was produced by Fresh Take Florida, a news service of the University of Florida College of Journalism and Communications. The reporter can be reached at swalker@freshtakeflorida.com.