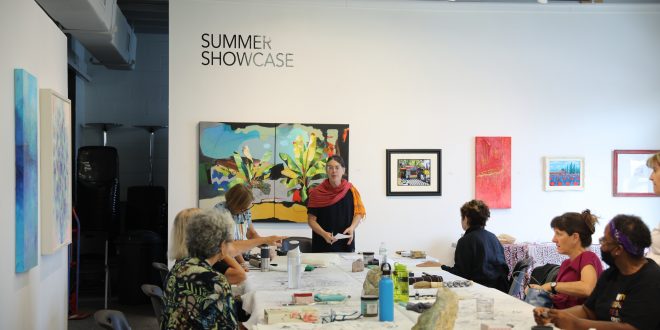 Artist Joon Thomas has spent 40 years making Chinese calligraphy and ink wash painting. This weekend, they shared the craft during a workshop at the Gainesville Fine Arts Association. It’s part of the association’s effort to diversify its programming.

“Gainesville is a very open community,” Katy Lemle, the association’s gallery director and operations manager, said. “The GFAA has been historically ‘white,’ we realized that, and we are taking steps to welcome artists from all different backgrounds.”

The association also held an exhibition called “Umoja” in May to celebrate Black artists in Alachua County and invited local artists from all backgrounds to join them.

Wendy Free, a local artist in Gainesville who appreciates natural materials and art sustainability, joined the workshop to learn Chinese calligraphy with Thomas. Free said she is a beginner of calligraphy and appreciated the art because it traditionally uses bamboo and paper, which are environmentally friendly materials.

“I’m learning the traditions of Chinese calligraphy,” Free said, “and I want to expand and develop that with my own ideas by using natural materials and pigments [from flowers].”

Thomas has found Gainesville to be an open-minded place to practice and teach calligraphy, and Thomas feels passionate about it and hopes more people could know about this kind of art that’s created with simple materials.

When Thomas isn’t leading workshops, they spend the day in their studio at Sweetwater Print Cooperative on South Main Street at downtown Gainesville. To create a recent drawing of a chicken catching bugs in the bamboo forest, Thomas used a piece of Xuan paper, a bowl of water, a stick of solid ink and some brushes.

Thomas’s interest in the art form began when they were studying Chinese language and culture at University of Pennsylvania. Thomas was eager to learn Chinese calligraphy, but it was so hard to find a calligraphy mentor in Philadelphia at that time that they started from ink painting, which is similar to calligraphy but uses the same tools.

“I came to Chinese painting through the back door looking for calligraphy,” Thomas said. They still remember the experience of becoming the student of a famous pioneering Asian American printmaker, Chen Lok Lee.

Thomas said Lee refused the request first, but they always snuck into the classroom through the backdoor with acquiescence.

After 40 years, Thomas now is a professional calligraphy artist and has held several exhibits and in-person workshops at Gainesville Fine Art Association since May.

During the workshop, Thomas encourages students to draw tiny things from nature, a piece of leaf, a flying bug or even a still stone on the ground.

“You observe, you feel it, and you put it away,” Thomas said, “They get digested inside of you, and you go make the painting. The picture comes from your memory and your experience.”

Marilyn Gray, Gainesville local calligrapher, has been working with Thomas for years and helped to organize the workshop. She writes and translates Chinese poetry, and said she felt relaxed when doing calligraphy.

“We need to hold on to those arts and calligraphy traditions,” said Gray, “It’s also a tradition and history that people need to be aware of.”

Mingmei is a reporter for WUFT News who can be reached by calling 352-392-6397 or emailing news@wuft.org.
Previous Buckets Of Rainfall Hit U-Pick Farms In North Central Florida
Next Tropical Storm Elsa Submerged Some Of The Same Neighborhoods As Hurricane Irma Did