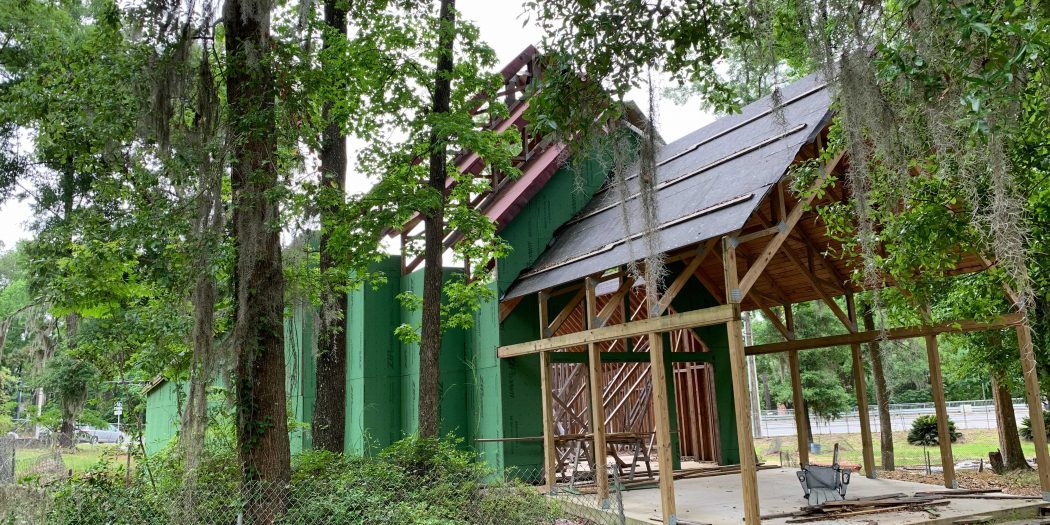 A building permit for the Zion Lutheran Church's sanctuary was issued in October 2019, but construction never made it past the main frame of the structure. (Maybel Cerrato/WUFT News)

Legal filings are revealing the answer for why the construction of a Gainesville church sanctuary halted, even before the pandemic began.

The sanctuary site on the northwest side of a prominent Gainesville intersection at Northwest 16th Avenue and 34th Street remains stuck at the same point as when construction stopped in late 2019.

The exposed wood beams are weathering to gray, sawhorses remain right where the last builder crews left them and congregation members cannot enter the site, as they would have been expected to do by now if the project had gone as planned.

Zion Lutheran Church filed suit in March on a claim of over $100,000 against architect John Zona III and engineer Joseph P. Watson, contractors for the project.

The lawsuit came after Zion Lutheran hired Driscoll Engineering, an engineering consulting company based in Gainesville, to inspect the $108,000 plan prepared by Zona. The lawsuit shows that Driscoll discovered over 80 deficiencies and omissions in the contractor’s original plan.

Driscoll, for example, noted the foundation plan only provided measurements for the beams, not columns, which could lead to “potential column failure and ultimate collapse of the sanctuary roof assembly.”

In the nearly two months since the church filed the lawsuit, two other defendants — Royal Foam US and its manager, Valentyn Kulbaka — have asked to be dismissed from the case, with Kulbaka’s attorney saying he was a contractor not involved in designing the plan and doing only what was asked of him. Thus, Royal Foam’s attorney argued, the company could not be found negligent or in breach of the construction contract.

Alachua County Circuit Civil Judge Monica Brasington is overseeing the case and has yet to rule on that motion. She is also considering a motion for final default judgment against Watson, who has not responded to the 20-day summons.

WUFT reached both Zona and Kulbaka by phone, but they declined to comment.

Zion is requesting a jury trial in the case as a means of recovering the thousands of dollars it spent on what its consultant found to be a faulty design.

Funding for the new project came from multiple sources, the church’s pastor said, highlighting the generosity of the local community.

“It’s both the congregation … (and) we have a church lender as well that we’ve worked with,” Pastor Brian Wrobel said.

The church had planned for the new sanctuary for many years, Wrobel said, even prior to his arrival. The church previoulsy had a consultant and a vacancy pastor that helped the vision of this project advance.

“It was at the start of this congregation, back in the ’70s,” Wrobel said. “The building we’re in was intended to be a short-term solution. It’s a bit of a one-room schoolhouse utilitarian building, which makes it very difficult to have multiple things going on at the same time. It was never meant to be permanent and here we are, 40-plus years later — still.”

Now that its dream-turned-nightmare has reached this point of the impasse with the litigation beginning to play out, Wrobel said, Zion Lutheran intends to tear down the 1970s-era building and eventually repurpose it into an entirely new design footprint. The immediate future of the half-built sanctuary remains unclear.

Maybel is a reporter for WUFT News who can be reached by calling 352-392-6397 or emailing news@wuft.org.
Previous Florida Medical Marijuana Legislation Stalls As Public Employees Are Fired For Legal Use
Next From Wi-Fi Hotspots To Language Learning, Alachua County Library District Serves Community During Pandemic

The Alachua County Sports and Events Center at Celebration Pointe will open on Jan. 13, …