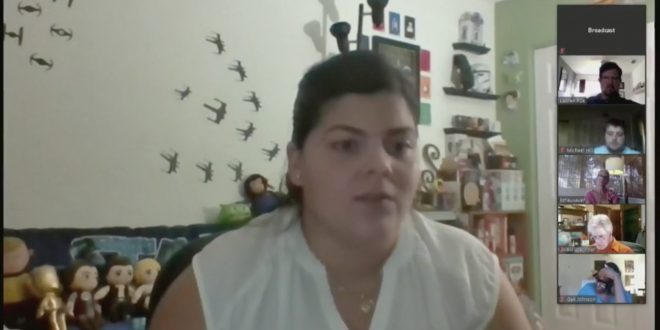 Reina Saco speaks in a recent commission meeting, just days away from the expiration of the local government zoom exemption. She said she is unhappy about DeSantis’ decision to not extend the order. (Christopher Cann/WUFT News)

A bit of normalcy returned for local government officials on Monday.

An executive order expired on Sunday that had allowed local government to hold public meetings virtually. This means local politicians are forced to again meet in person, as per the state constitution and Sunshine Law.

The executive order was signed by Gov. Ron DeSantis on March 20 to halt the spread of the novel coronavirus. It was originally scheduled to expire Oct. 1 but was later extended to Nov. 1.

Local government officials are torn on DeSantis’ decision to not extend the exemption.

“I’m not happy for myself, but I’m not happy for our staff,” she said. “They are exposed just as we are for six and ten hours. That’s unacceptable. I don’t see forcing us back as anything other than a political gambit.”

Saco said the Gainesville City Commission had run effectively with its virtual presentation, which allowed residents to view meetings on either Channel 12 or Facebook.

“There are some glitches, of course, but we’ve managed to run the city fairly well from a virtual setting without putting my staff in danger,” Saco said.

She said there are steep consequences if the reinstated requirement is not followed, including possible termination, fines and criminal charges.

Masks will be required for both staff members and residents alike at Gainesville City Hall. Temperature checks are already required of anyone walking through the City Hall doors.

Additionally, she mentioned the installment of plexiglass and the possibility of holding meetings in other venues apart from City Hall, which are more suitable for social distancing.

“It’s just getting them to test drive and see which one works,” she said. “It will be a learning curve.”

A majority of commissioners are required to meet in person during meetings, according to the reinstated order, allowing a minority to tune in virtually if they choose.

The Marion County Commission has long been hosting in-person meetings, so the expiration of the virtual meeting exemption will not affect its procedures, county spokesperson Kelli Hart wrote in an email. Like other commission boards, a live stream of meetings is available on its county website.

For those attending in-person, masks and social distancing are strongly encouraged but not required,  Hart wrote.

Alachua County spokesperson Mark Sexton said the Alachua County Commission will begin with a hybrid format. The commission will continue to stream its meetings on Channel 12 and Facebook, like the city commission. For those eager for in-person spectating, masks and social distancing will be required in the county administration building.

Since a quorum is needed, only three of the five county commissioners are required to attend in-person. Sexton said he is not sure who will physically attend and who will tune in through an online platform.

“It’s the goal of the county commission to conduct meetings in a way that follows state law but also is sensitive to the fact that many of our citizens are not comfortable with the idea of entering into a building and sitting down with a bunch of people they don’t know,” he said. “And we don’t want those people cut off from participating in their local government.”

Christopher is a reporter for WUFT News who can be reached by calling 352-392-6397 or emailing news@wuft.org.
Previous How WUFT Is Covering The 2020 General Election
Next Meet The Candidates Running For Putnam County School Superintendent