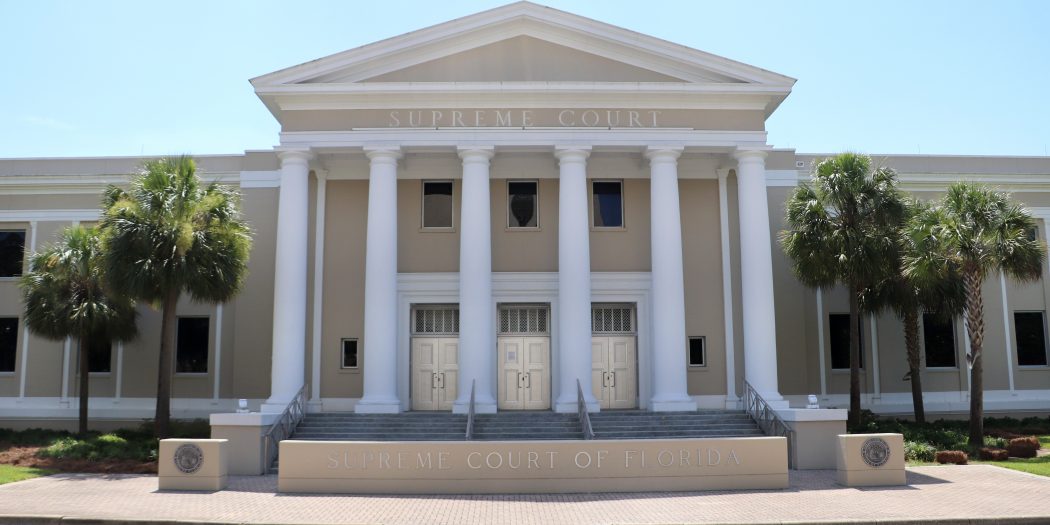 The Florida Supreme Court will consider arguments this week in a case that considers whether the identities of officers who kill civilians should be protected under the state’s new Marsy’s Law. (Lauren Witte/Fresh Take Florida)

Florida’s Supreme Court is forcing Gov. Ron DeSantis to defend his appointment of a Jamaican-born, Black woman to the state’s high court, amid a legal dispute over whether she was eligible.

The case represents a rare collision between DeSantis, a Republican, and the already conservative court, in a fight over one of its own prospective members. The governor’s appointment of Renatha Francis, a former circuit judge in Palm Beach County, was challenged by Rep. Geraldine Thompson, D-Orlando. The case ensnared all three branches of government over the appointment.

In legal papers filed overnight Wednesday, lawyers for DeSantis said that DeSantis didn’t appoint Francis prior to her being eligible, he merely announced his intention to appoint her. “An appointment as defined by the court did not reasonably occur,” they wrote.

During a news conference earlier in the day in Miramar in South Florida, DeSantis praised Francis and noted her Jamaican heritage. He said the island nation “might as well have been a galaxy away from the Florida Supreme Court.”

“Rather than celebrate this great achievement, we are now facing a politically motivated lawsuit attempting to prevent Judge Francis from assuming office in just the next two weeks,” the governor said. “She has excelled in the legal profession.”

At the same news conference, Francis described herself as an optimist and said she was grateful for what she said was a “once-in-a-lifetime opportunity.” She said she rose from a working-class background to the highest court in what she called one of the most important states. “I am truly the epitome of the American dream,” she said.

In what was seen as a compromise decision, the court on Aug. 27 declared Francis’ appointment unconstitutional – because she did not have a minimum of 10 years’ experience on the Florida Bar – but it declined outright to block her appointment. On Tuesday, in an unexpected move, the court ordered the governor to explain within 24 hours why he shouldn’t nominate someone else.

Florida’s Supreme Court currently has no Black justices, after former Florida Supreme Court Chief Justice Peggy Quince retired in January 2019. Francis would be the first Caribbean-American on the court. The governor said none of the other possibilities on the list of qualified judges delivered to him is Black.

DeSantis nominated Francis in May, after two justices accepted nominations to a federal appeals court. Francis’ 10th anniversary with the bar will occur later this month. The governor, who was required to appoint a successor judge within 60 days, sought to delay Francis’ move onto the court until this month.

“When we announced the selection, we made clear that this would happen in the third week of September, and we thought everyone was fine with that,” DeSantis said.

After Thompson complained about the intentional delay, the court ruled the governor’s move was unconstitutional. “When a governor fills by appointment a vacant judicial office, the appointee must be constitutionally eligible for that office at the time of the appointment,” the court said.

The governor called Thompson’s legal challenge “so misguided” and “quite frankly an insult to the Jamaican-American community.”

Thompson said she was concerned about the appointment of another conservative to the court.

“I view the courts as an impartial place that is able to make decisions without political bias,”

Thompson said in an interview. “It is not a place you stack with judges whom you are aligned with politically.” She added: “It’s not only about identity, it’s also about her ideology.”

The court denied Thompson’s request to produce a new list of eligible candidates who might include Black lawyers or judges.

A fellow Democrat, Rep. Dotie Joseph of Miami, urged Thompson to abandon her challenge against Francis, saying that it was important to elevate a Black woman to the Supreme Court and Francis was not as conservative as U.S. Supreme Court Justice Clarence Thomas.

Clarence Thomas,” Joseph said at the governor’s news conference. “While she may be conservative and a member of the Federalist Society, none of those things in and of themselves disqualify Judge Francis from deserving of our support or stamp of approval.”

Another appointment to the court, John Couriel, who is white, is not being contested.

In another court-related development, President Donald Trump on Wednesday released the names of judges he might consider nominating to the U.S. Supreme Court in the future. Among the names were two Florida judges: current Florida Supreme Court Justice Carlos G. Muñiz and Barbara Lagoa, who moved from Florida’s Supreme Court in 2019 to the U.S. Court of Appeals for the 11th Circuit in Atlanta. Lagoa had been the first Hispanic woman appointed to Florida’s high court.

Nomfumo is a reporter for WUFT News who can be reached by calling 352-392-6397 or emailing news@wuft.org.
Previous The Point, Sept. 10, 2020: Confederate Memorial Removed From St. Augustine Plaza
Next Alachua County Library Millage Rate Drops For 2020-21 Fiscal Year