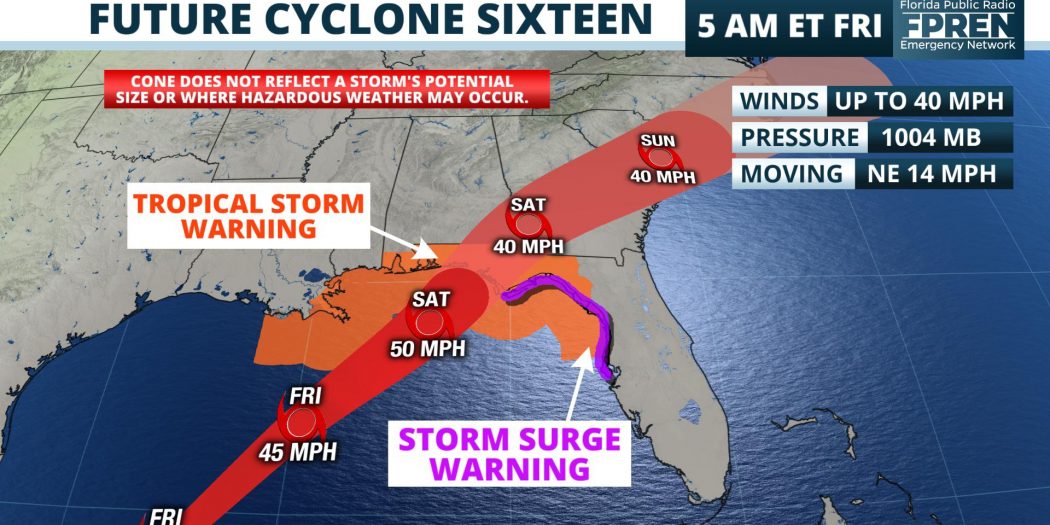 Potential Tropical Cyclone Sixteen is expected to become Subtropical Storm Nestor as it moves over the Gulf of Mexico and toward Florida later today. Tropical storm conditions and a life-threatening storm surge are forecast to reach coastal areas of the panhandle and west-central Florida by Friday evening.

A Storm Surge Warning has been issued from Indian Pass to Clearwater Beach, where a large and expanding area of onshore tropical storm force winds are expected to push the water into the coast for hours. An inundation of three to five feet above normally dry ground is expected from Indian Pass to Crystal River, including the vulnerable low-lying areas around Cedar Key. An inundation of 2 to 4 feet of water above dry ground is possible from Crystal River to Clearwater Beach, with 1 to 2 feet of surge possible in and around Tampa Bay.

The National Hurricane Center has noted that surge-related flooding can vary greatly over short distances. How high the water may get in your neighborhood depends heavily on the timing of the highest water levels as they relate to the tidal cycle. Residents in an evacuation zone are encouraged to listen to local officials for further information and possible evacuation orders.

A Tropical Storm Warning is in effect from the Alabama state line to the Nature Coast. Inland Tropical Storm Warnings are also in effect for the entire Floridan Panhandle, including Tallahassee, Marianna and Crestview. Tropical storm force wind gusts and periods of heavy rain could begin along the coast in the warned area as early as Friday evening, with those conditions likely spreading inland overnight.

The subtropical storm is expected to move ashore in the Florida Panhandle Saturday, and this is when a large area of heavy rain and gusty winds will rotate across portions of north and central Florida. The National Weather Service has placed most areas of the state north of I-4 under a “marginal risk” of severe weather, advising that an isolated tornado will be possible with any embedded thunderstorm activity that develops in the heavier rain bands.

The relatively fast movement of the storm is likely to mitigate the inland flood potential, although rainfall rates in some areas might be high enough to cause localized flooding of low-lying or poorly drained areas. Rainfall totals from the storm north of the I-4 corridor are expected to range from 2 to 5 inches near the Gulf Coast, to 1 to 3 inches farther inland. Lesser and more widely scattered amounts of rain are expected across portions of south and southwest Florida.

The subtropical storm is forecast to exit the state Saturday night, taking most of the rain and adverse weather with it. A much drier and calmer day is expected across Florida on Sunday, although breezy conditions may continue and the risk of rip currents might be elevated at area beaches.