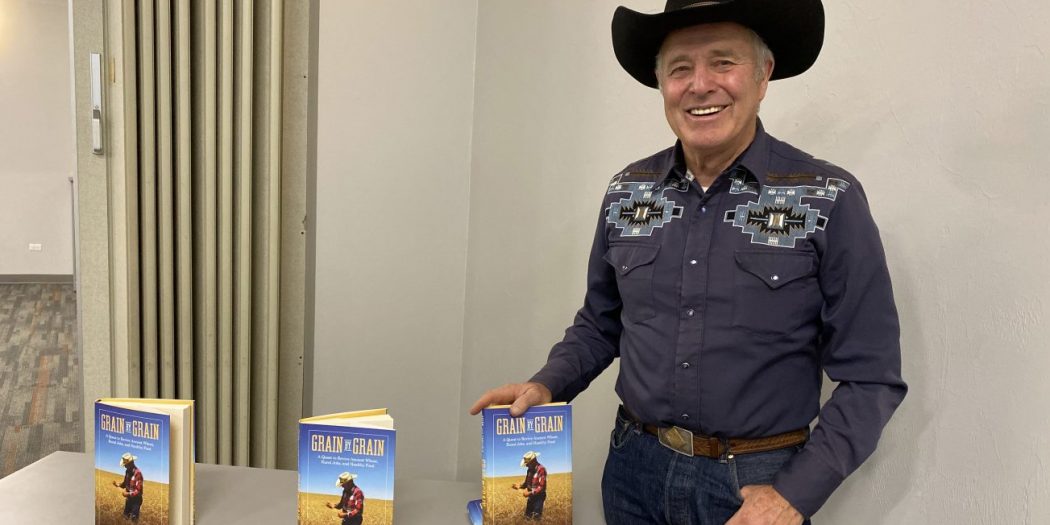 Bob Quinn so believes in the power of organic farming that he once sent some of his farm’s own wheat to an ailing woman who he believed needed only toxin-free food.

Quinn, an organic farmer from Montana, spoke of that and other farming experiences as part of his book tour Thursday night in Gainesville. He visited the Florida Farm Bureau in Gainesville to speak to a group of about 25 who wanted to learn more about organic growing.

“I have many stories to tell everyone, and I think you will all enjoy it,” Quinn said.

Quinn started his business, Kamut International, more than three decades ago. It’s now based in Big Sandy, Montana, which is where he has done most of his organic farming. His brand of Kamut farming is prevalent in the United States, as well as Canada and some parts of South America. Quinn has ambitions to see it grow to Mongolia.

Most attendants Thursday night purchased a copy of his new book “Grain by Grain: A Quest to Revive Ancient Wheat, Rural Jobs, and Healthy Food.”

His stories on Thursday described his struggles with beginning as an organic farmer within his community. He described how spraying pesticides over crops was unnecessary to grow wheat, and also how he created a cycle to successfully grow crops throughout the seasons.

His book is co-written by Lis Carlisle, though it is written from Quinn’s perspective about his adventures, trials and tribulations as an organic farmer.

For a year, Quinn has been promoting his book across the United States, visiting nearly a dozen different states in the west, northwest and Midwest. He said he looks in the coming months to continue his tour along the east coast, including a second stop in Gainesville on Friday at the University of Florida.

The book is in its second printing, and can be found locally at Book Gallery West.

Marc Ketchel, co-founder of Florida Organic Growers and Consumers Inc. and Quinn’s close friend, introduced Quinn and said Kamut brand products can be found at stores like Fresh Market and Whole Foods. Quinn is no longer the only farmer growing Kamut brand crops — with some 250 nationwide — but they all follow the guidelines he has set forth. In order to sell the brand, it has to be grown only in the way which he presented it.

“We’re going to be speaking to a number of classes at the university (on Friday) that associate with agriculture, and we expect there to be double or triple the crowd there,” Ketchel said.

Quinn said he enjoyed his journey to Gainesville, especially to experience the fall Florida climate.

He wears a black hat with wheat on it, a sample of the organic crop that he grows. He said that he has been wearing the wheat hat since they started their trademark in 1990.

“The wheat always travels,” Ketchel joked about his friend’s hat.

Quinn said he’s not just promoting the book, and his presentation’s final slide featured a ripple — similar to the one he wants to start a ripple that could create change within the agricultural community.

Karmiyis is a reporter for WUFT News who can be reached by calling 352-392-6397 or emailing news@wuft.org.
Previous Eastside High School Offers Colombian Students A Taste of American Education
Next Florida Standards Listening Tour Stops By Alachua County