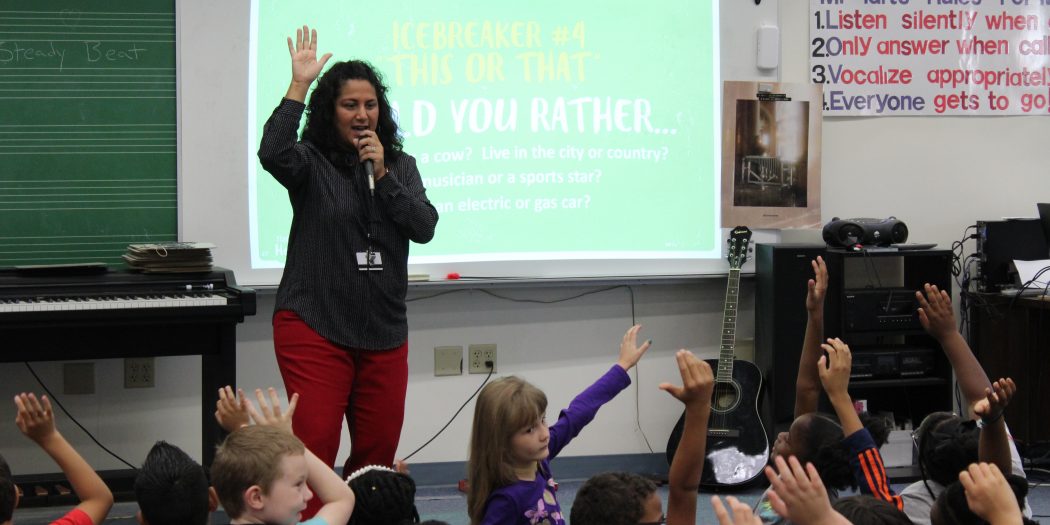 Alvarez instructs pupils how to engage with a classmate who might be sitting alone at Myra Terwilliger Elementary. “I love that in elementary, we have the opportunity to have students in the palm of our hand as far as their learning and attention and their engagement,” Alvarez said. (Sophie Feinberg/WUFT News)

As part of a new “Wellness Wednesdays” initiative in Duval County Public Schools, educators will give 30-minute video instruction with interactive activities on a mental health topic. The instruction will occur every early release day, which happens once a month on a Wednesday.

Alachua County Public Schools held a “Start With Hello” program at a Gainesville elementary school on Sept. 24. Sandy Hook Promise Foundation representatives will visit local middle and high schools this week to teach students how to engage with peers who might need help.

In Bradford, Clay, Columbia and Levy Counties, school district officials are still developing a curriculum for how to offer mental health instruction to students in sixth to 12th grades.

In July, the Florida Board of Education mandated five hours of such instruction within the school year. The state became the third in the nation to require it. In New York, kindergarteners through 12th graders must have it, while in Virginia it is required for ninth and 10th graders.

One in five children between ages 13-18 have or will have a serious mental illness, and 50 percent of all mental illness begins by age 14, yet less than 20 percent of teenagers receive the treatment they need, according to a news release announcing Wellness Wednesdays in Duval.

The initiative “aims to improve the emotional and mental well-being of students and help them identify the signs and symptoms of a mental illness,” the release states. “It will also show them how to get help for themselves and their peers.”

Though past legislation related to mental health was criticized for not explicitly mentioning suicide prevention, the state board’s new ruling does. It calls for teaching students how to recognize signs and symptoms of disorders, mental health awareness and assistance, and how to develop coping skills. Each district is expected to use state funding already set aside in its budget for health instruction, or otherwise determine how to implement it without an additional cost.

Each district has until Dec. 1 to submit plans to the state education department as to how they would structure and teach the required lessons. The state board has no plan to allow parents to waive mental health instruction for their child or to expand it into elementary schools, said Cheryl Etters, the department’s deputy director of communications.

Some districts, however, are opting to introduce mental health curriculum to younger pupils.

The push for mental health education in public schools correlates with the rising number of mass shootings in the United States. Sandy Hook Promise was founded after the shooting that claimed the lives of 20 first-graders and six educators at Sandy Hook Elementary in 2012.

It’s never too soon to teach students about mental health, said Jesely Alvarez, the assistant principal at Myra Terwilliger Elementary, where the “Start With Hello” program was held.

“I think a 5-year-old in kindergarten or a 15-year-old in secondary can learn tools to be able to be preventative,” Alvarez said. “So when we see a 5-year-old reaching out to another student at the playground, or at recess or at the bus, we’ve done something positive to prevent that student from feeling isolated or not connected to school.”

Andrea Longstreet, 40, of Turkey Creek, who has a son who is a sophomore at Buchholz High School in Gainesville, said she supports offering instruction to students about mental health.

“I feel strongly that mental health awareness can help avoid some of the tragedies we see every day in the news,” Longstreet said.

She said she and her son feel the instruction should go beyond the Sandy Hook Promise lessons.

“He feels like it is too little, too late, as many students who are in high school, in particular, already perceive themselves to be on the outside looking in …,” Longstreet said. She added that he also said “Start with Hello” can be “perceived as patronizing by the student who is at risk.”

Alachua schools will use one class period a month for the next six months to meet the criteria, said Jackie Johnson, the district’s director for communications and community initiatives. Future lessons will focus on seeing signs of mental illness, finding related resources and preventing and dealing with substance abuse, Johnson said. These lessons will be led by teachers as well as volunteers from community partners such as the National Alliance on Mental Illness, she said.

In Marion County Public Schools, teachers won’t need additional training to provide the instruction because it’s only five hours, and will be worked into core classes, not electives, said Kevin Christian, the district’s director of public relations and multimedia productions.

Marion is moving toward integrating the instruction into middle schools first and then high school, said Christian, who added it should begin “this current semester.”

France said she knows other districts have looked at purchasing content as a way to get the new curriculum to students. However, that is not an option for Putnam.

“The reality is – we did not set aside funding to do this,” France said.

Union County Public Schools is on its way to implementing mental health instruction, said Steve Hoard, the district’s safety and mental health coordinator. He said elementary students will be included in the initiative through Sanford Harmony, a social emotional learning program. In middle schools, students will use study halls to complete the instruction. In high schools, certified teachers will deal with the instruction in four different classes, Hoard said.

Union County is part of the North East Florida Educational Consortium, an agency that works to provide small or rural districts with extra support. That is where the county’s district learned about various mental health courses and selected the programs it will implement, Hoard said.

“We’re really excited to roll it out,” he said. “Our kids across the county need it.”