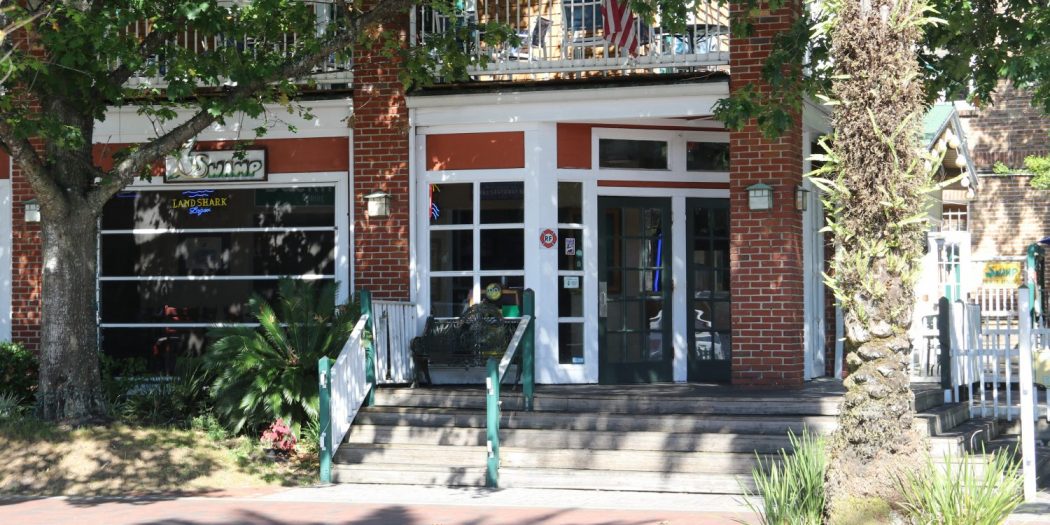 The developer of the property where The Swamp Restaurant currently exists says it has reached an agreement with the restaurant's owner to keep it as part of the new development. (Jacob Berkowitz/WUFT News)

Developer: The Swamp Restaurant Will Live On After All

To modify a famous Mark Twain line from more than a century ago, reports of the death of The Swamp Restaurant in Gainesville may have been greatly exaggerated.

It appeared two weeks ago following a developer’s community workshop that The Swamp’s days were numbered, but the developer now says it has a new lease on life.

During that meeting last month, in which plans for redeveloping a part of Gainesville’s Midtown were announced by the 908 Group, developers showed site renderings that had new construction replacing The Swamp. That complex included mainly apartments, along with some retail space and parking areas. The plan covered several pieces of property including the University Station Post Office and several other businesses.

908 Group Director of Development Brad Wolfe said there would be discussions with displaced tenants who wanted to stay but admitted rent might be much higher than it is now.

Many left that meeting pessimistic about the future of The Swamp, as well as other businesses like Grill Fresh, Larry’s Giant Subs and Style Cuts.

But it was the apparent loss of The Swamp that led to a firestorm on social media. Online petitions were started that collected thousands of signatures in just a few hours. A state lawmaker even introduced a doomed amendment that would have deemed the restaurant a historic landmark.

Since that meeting, development plans had been fairly quiet. That remained the case until Wednesday morning, when the 908 Group sent out a news release saying The Swamp Restaurant remaining at its current location, 1642 West University Avenue.

“We want to correct the misperception that The Swamp Restaurant is going away,” said Brian Detri, 908’s director of construction management.

Sign up for our morning newsletter for more Gainesville and Florida news.

Swamp owner Ronald DeFilippo had previously said he was uncertain of the restaurant’s future.

“It will continue to be a great Gator experience on the same site, under the same management,” DeFilippo said.

According to the release, the developer and restaurant management said the new venue will incorporate the current restaurant’s design, while adding space and upgrading facilities. Plans for the new Swamp include maintaining an outdoor patio and historical elements from the original Swamp, a larger kitchen and dining area along with technology upgrades and improved features.

Detri and DeFilippo said their priority is to honor the legacy of The Swamp, which has been a popular Gator fan gathering site for years.

Detri went on to say “908 Group is dedicated to preserving community culture, tradition and businesses in each market we invest in. The Midtown corridor along West University Avenue will be no exception. We will continue to working with The Swamp’s owner and the community to make our development an asset for the University of Florida and the City of Gainesville.”

Defilippo said the restaurant’s management and staff appreciated the outpouring of support from customers who believed the restaurant would permanently close.

The 908 Group has said work on the Midtown project could begin as early as January.

A restaurant located adjacent to The Swamp, Grill Fresh, closed on Tuesday:

Forrest is a radio news manager for WUFT News. Reach him by emailing news@wuft.org or calling 352-392-6397.
Previous Fundraisers, Grants, And A Plea To Gainesville’s Mayor Haven’t Yet Saved Florida’s Only Peer Respite Organization
Next Life After Separation