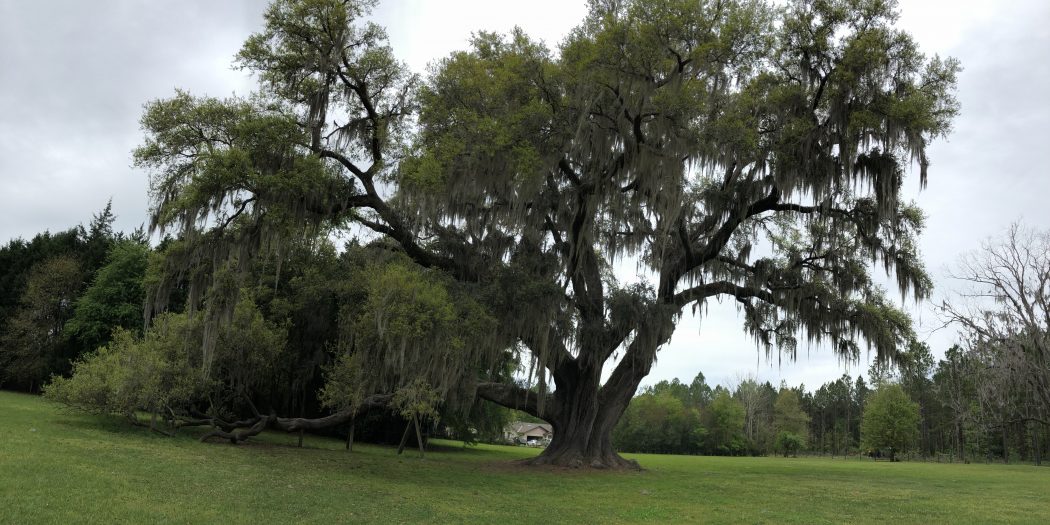 Florida's largest live oak sits 0.3 miles south of La Crosse, Florida. It is estimated that the tree was planted in 1832.

Gainesville native Veronica Kidney, 47, fears her city might be losing a key characteristic: its trees.

She loves the outskirts of town because it reminds her of how Gainesville used to look like when she was growing up. To Kidney, the best parts of Gainesville are its peaceful trails and parks with tall pines.

Now, she said, her hometown has changed so much, she can hardly recognize it.

That was until she visited Cellon Oak Park, located at 4100 NW 169th Pl. The park contains Florida’s largest live oak, which proudly stands at 91 feet tall with a circumference of more than 30 feet, according to a database of tree measurements from the Florida Department of Agriculture and Consumer Services.

Kidney and her family were in awe when they first stumbled upon the park while geocaching, an activity in which individuals use their GPS to locate boxes of trinkets hidden throughout the United States.

The family loved the 187-year-old tree so much they made it the backdrop for their 2014 family Christmas card.

But the Cellon Live Oak is more than a beautiful setting for family pictures and weddings. It is a Champion Tree, a label given to the largest known trees of a given species in a geographical area.

Alachua County is familiar with Champion Trees; both the Champion and Co-Champion live oak grow within county lines.

A University of Florida IFAS study shows that live oaks, like the Cellon Oak, makeup only 4 percent of all trees in the area but contribute almost a third of tree coverage in Alachua County. This is because live oaks are evergreen and keep their foliage year-round.

Charlie Houder, director of parks and conservation lands in Alachua County, said champion trees are crucial to the environment. They are key to biodiversity, habitat and climate stability. Because they are usually the sturdiest of their kind, these trees are the last to fall to pollution or disease.

Houder and his team strive to preserve Cellon Oak Park and other greens spaces in the area. Since the county first purchased the park in 1989, Florida’s largest live oak has been protected against deforestation.

For more than 35 years, Gainesville has held the title of Tree City USA. The title is presented to towns throughout the country that meet and maintain the core standards of urban forestry management outlined by the Arbor Day Foundation.

But that title might be in danger as Alachua County loses its canopy.

A 2016 UF survey found that Gainesville had lost 11 percent of its canopy since 1996. Less than half of Gainesville has tree coverage today.

Michael Andreu, the UF professor of forest resources and conservation who conducted the survey, said the most concentrated, urbanized areas of town feel this loss the most.

Kidney has seen this change with her own eyes.

She lives on Tower Road and says watching the bulldozing of woods across the street is heartbreaking. The most recent addition to the leveled ground is a brand-new Dollar General.

“I think it’s hard to appreciate the nature we have when every time you turn around, it’s gone,” she said. “With all the construction, it’s like Gainesville is trying to be a big city like Orlando or something.”

Houder’s parks division manages existing parks to create the best habitat quality and promote ecological diversity. Vegetation, such as trees, can be replanted and manipulated in the process, he said. Although replanting adjusts the tree canopy of natural lands, they still maintain their greenery.

“The end goal,” Houder said, “is to keep the most important natural areas in the county from being lost to development or other land uses.”

Anastasia Sims is a reporter for WUFT News. Follow her on Twitter at @anastasiacsims. You can reach her at 352-281-1141 or 352-292-NEWS.
@anastasiacsims
Previous Mar. 21, 2019: Evening News in 90
Next What Gainesville Leaders Plan To Do Following East Side Homicide