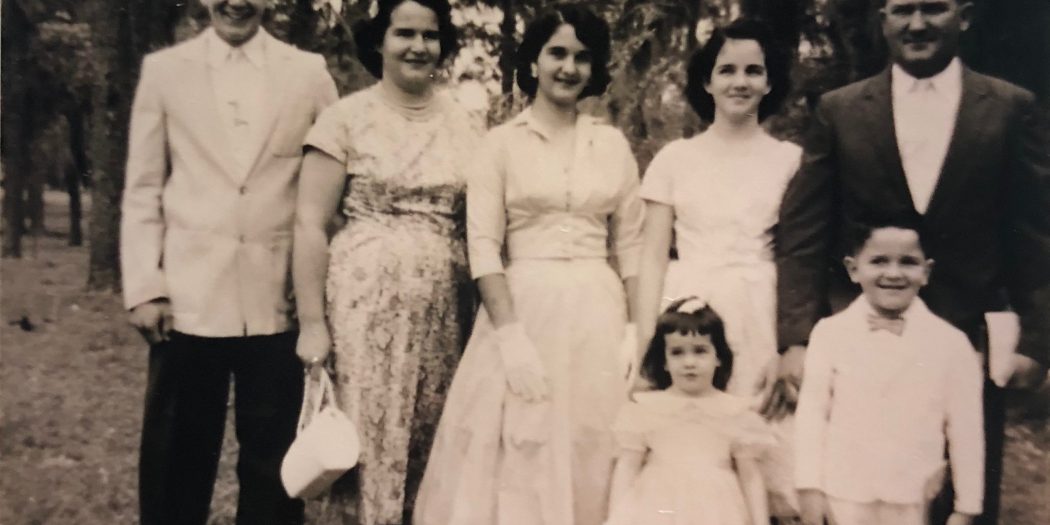 The Guinns at their Annual Easter gathering back in the 1950s. Janice remembers everyone bringing food filling three whole tables; a whole table or two for dessert and one for drinks. Everyone would bring a hand-made gift for whichever family member they would draw. She says the rule was, "make it, bake it, sew it, or grow it." One of her favorite gifts was a fireplace screen from her sister, Patricia. (Photo courtesy of Janice Eatmon)

As The City Celebrates Its 150th Anniversary, One Family Remembers Where Ocala Came From

Swimming in the springs. Picnicking with friends from church. Riding on the hood of their father’s car, legs wrapped around the headlights, as he drove slowly down the dirt road to their home. These are the memories of Ocala that stand out for Janice Eatmon, 77, and her sister, Patricia Chambers, 73, both sixth-generation Ocalans.

“Daddy would take us to town on Saturdays and everybody did their grocery shoppin’ and paid their bills, and we’d go to the movies sometimes,” Eatmon said.

Ocala, which is celebrating its 150th anniversary this year, is now a thriving city with more than 59,000 people. Its population, developed infrastructure and airport mark the growth of a city typically known for farmland and horses.

But Eatmon and Chambers remember what it was like before all that progress. Both sides of their family, the Longs and the Guinns, are considered to have been among the first settlers in Marion County. The Guinns settled in 1840 just across the Ocklawaha River, while the Longs settled in 1872 on Pat’s Island, out in the forest just off East Juniper Springs Road.

“We used to go to town on Saturdays with daddy and mama and grandpa Baldwin, and grandma Baldwin and I loved walkin’ with daddy,” Eatmon said. “He would take you by the hand and walk you around, and daddy knew everybody in town, and it just made you feel so good.”

Before the paved roads, Eatmon recalled, the dirt roads and streets were named after the first family who built a house there. She lived on a dirt road named after her grandfather, John Asa Baldwin.

“On a Sunday afternoon, after we gone to church and ate lunch, daddy had an old car with a hood and big fenders that came out with a headlight on top of ‘em,” Chambers said. “And when we’d get across the river, he would let us sit on those big fenders with our legs around the headlight, and he would drive down the dirt road, probably going 10 miles an hour.”

As they would drive down the road, their father would point out each of their relatives’ houses — the Wellhorners, the Godwins, the Gores.

Eatmon said the family didn’t own a television until the ‘50s, so playing outside with one another until the sun went down was what they loved most. There was no such thing as boredom back then.

“We played ‘Bail Over,’” Eatmon said, “Take a ball — one of you is on that side of the house and the other one’s on this side of the house — and you’d holler ‘bail over’ and throw the ball and they’d have to catch it.”

Ocala is filled with generations of people who value a close-knit community, the sisters said.

“The people in Ocala are so…they’re so different,” Eatmon said.

The people of Ocala were especially loyal to Janice and George Eatmon’s doughnut shop, Tas-T-O’s Donuts. George Eatmon, 78, bought the shop from two friends in 1970 with a bank loan based on a handshake. They owned the shop for 33 years before retiring from the business.

When the Eatmons decided to take vacation time from their shop, George Eatmon would worry about people getting used to the store being closed and that they wouldn’t come back.

“But people didn’t care; they were standing right there waiting,” Janice Eatmon said. “People are good; people are still good.”

Tas-T-O’s Donuts was a highlight of Ocala during Eatmon’s time, similar to the businesses that could be celebrated during Ocala’s 150th Anniversary. The city plans to sponsor events once a month commemorating local businesses and landmarks that were paramount to the old Ocala.

George Eatmon said people who were customers at the doughnut shop still come up and speak to him. The man who installed the flooring in their house was one of the kids from Fort McCoy School, where the Eatmons would donate leftover doughnuts at the end of the day. The school allowed students to sell the doughnuts, which helped him pay for his school trip to Washington, D.C.

“He said he’s been grateful for that all his life, and he always wanted to tell us,” Janice Eatmon said. “Ocala is a neat place; it really is.”

Tas-T-O’s Donuts, 2205 E Silver Springs Blvd, is still open from 5 a.m. to noon every day or until they sell out of doughnuts.

George Eatmon noted that all the city’s roads are paved now. New roads like Silver Springs Boulevard and Pine Street have been added, some with additional lanes. Almost all of the city’s original buildings have been torn down over the years, except for part of what was then Munroe Memorial Hospital, now Advent Health, and the old central elementary school, now the Marion County Public Schools government office.

Even as Ocala has grown, people in the community have tended to know each other, the Eatmons said.

“Even after there were a lot of people here you still knew everybody though,” Janice Eatmon said. “It’s just recently, like in the last 20 years, that we don’t know everybody.”

Emily Long is a digital reporter for WUFTV News. Follow her on Twitter @emlo_ufl. You can reach her at 407-704-0272.
Previous The Point, Feb. 14, 2019: State Representative Threatens Closure Of UCF, Then Walks Idea Back As ‘Hyperbole’
Next Seniors At Hawthorne Wellness Center Keep Their Minds And Bodies Healthy