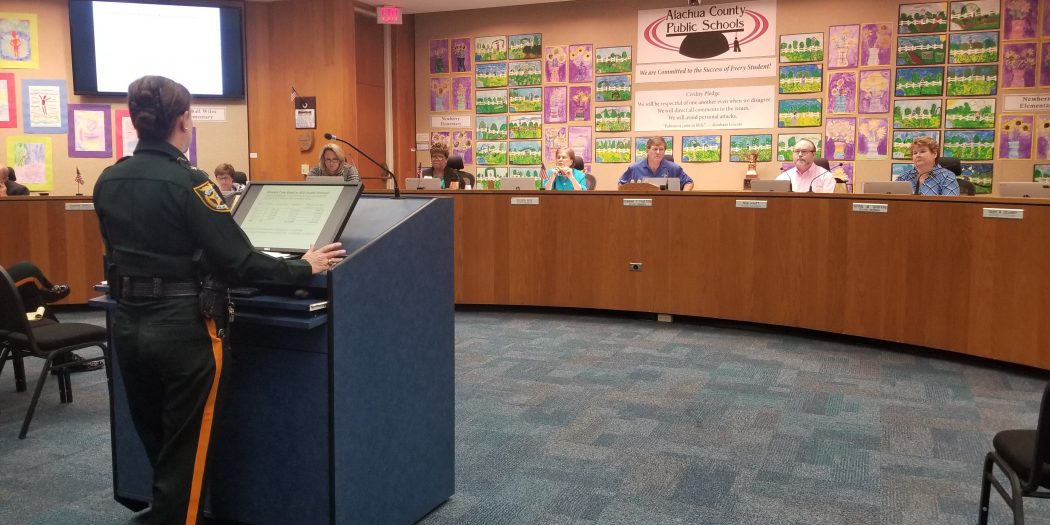 Sheriff Sadie Darnell explained her contract counteroffer to the Alachua County School Board in a Tuesday morning meeting. With additional funding provided to by the state to school boards in the wake of Stoneman Douglas, the Alachua County school board offered additional funding for all police departments, but ASO is requesting even more. (Matthew Arrojas/WUFT News)

The school board paid 13.2% of the total cost of the SRO program for the 2017-2018 school year. The school board’s initial proposal was to increase that percentage to 27.5% of the costs for 2018-2019, but Darnell said that the Board of County Commissioners wants there to be a more even split.

“What has happened for decades is that the county has borne a disproportionate share of the burden of the cost of the program, and it wasn’t until just recently, going back to 2014, that they started expressing dissatisfaction of that,” she told the board.

In order to reach the 45% proportion ASO is proposing, the school board would need to commit another $431,000 on top of the $680,000 the board initially proposed, according to documents provided by Darnell.

In addition to ASO, the police departments of Gainesville, Alachua and High Springs were offered additional money to fund SRO programs provided by each department, said Everett Caudle, the director of special projects for Alachua County Public Schools.

ASO was the only department to request more money after the school board’s initial proposal. Caudle said that if the school board accepts ASO’s counteroffer, the other three police departments may ask for more funding, too.

“I would suspect that if we agreed to the sheriff’s proposal as it is, that those three agencies would come back to us and say, “Hey, this is a huge difference in what you’re paying per officer to the sheriff than what you’re paying to us currently,’” he said. “All of the contracts have clauses in it where we can renegotiate, and I’m sure that they would request that we renegotiate.”

According to a presentation made by Caudle, the school board initially offered to contribute money to SRO programs at a rate of about $38,000 per officer or deputy involved. ASO’s counteroffer asked for about $62,000 per officer.

If the school board were to extend that cost per officer to all four departments, it would cost the school board about $2.65 million. That’s about one million dollars more than the board initially proposed, according to Caudle’s presentation.

In order for the school board to afford that, board member Leanetta McNealy said that the board would need to pull money from the general fund.

“We can have all the discussions that we want to have this morning, but when I look at this figure knowing that we don’t have the funds and the money unless you go into contingencies some kind of way, I don’t see how we can do that,” she said.

Sheriff Darnell said that she doesn’t like to bring forth a problem without a possible solution, and her proposal was that if the school board fronts the money now, they will be able to request more money from the state later.

The Marjory Stoneman Douglas High School Public Safety Act set aside money for the Guardian Program, which is a program that allows school administrators including coaches and counselors to train to handle situations such as school shootings.

However, Darnell said that most school districts have elected not to take advantage of this program. According to the Florida Department of Education, left over money will be used to hire additional school officers, and Darnell said that if the Alachua County School Board requests that money, it can pay back the $431,000 she is requesting.

“This is a short term fix that’s just around the corner,” she said. “Let’s do it. It’s only $431,000 out of seven million, we’re going to be able to pay it back, get our deputies in the schools like we need and want and have for decades. Why not? That’s what I don’t understand, is the ‘why not?’ To me it seems easy.”

School board member Eileen Roy expressed doubt about this plan during the meeting.

“We don’t have any guarantee of getting the Guardian money,” she said. “You say that probably it will come into our budget, but we don’t know. We can’t count on getting that, so I just wanted to put that out there.”

She said that the repercussions of not striking a deal with the school board and having funding cut could have a large impact on her department.

“I would be able to justify keeping a majority of those positions, but the reality would be that likely, depending on how much funding was cut, I would lose some full time positions, and that would be very unfortunate to our community and to the county as a whole,” she said.

Because of the urgent need to come to a decision and negotiate further, the school board agreed to organize an executive meeting with Darnell sometime within the next week. The school board members said that they would then vote on the issue during their upcoming July 17 meeting.

Matthew is a reporter for WUFT News and Fresh Take Florida who can be reached by calling 786-332-8003 or emailing marrojas@ufl.edu.
Previous July 10th, 2018: Morning News in 90
Next UF School of Music’s Jasmin Arakawa and Steven Thomas will Rach-maninoff Your World