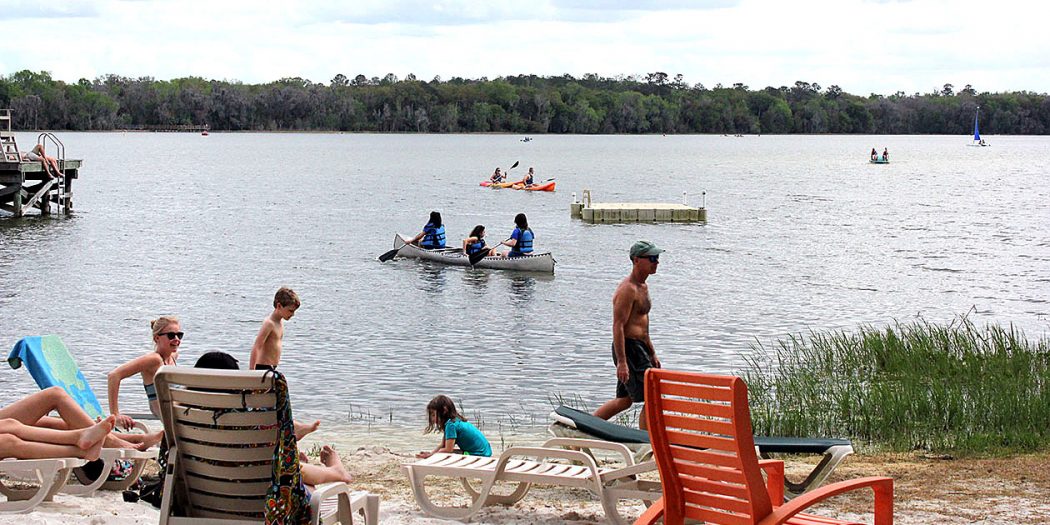 Families enjoy the lake on the makeshift beach at the UF North Shore site of Lake Wauburg, Sunday, Feb. 25, 2018.

Lake Wauburg is known to University of Florida students as a community where they can enjoy recreational activities along the shoreline. To Micanopy residents, the term community is limited to those only affiliated with the university.

However, now that Alachua County purchased the former YMCA Camp McConnell north of Micanopy, they hope a new local park will offer facilities similar to UF’s sites at Lake Wauburg.

Micanopy residents have access to Lake Wauburg at Paynes Prairie Preserve State Park, yet some residents on social media expressed that they would love to use the UF parks’ special features, which is roughly a four-minute drive from the center of town. They can only access the park as a guest of someone with a valid student ID.

Paynes Prairie Preserve State Park offers eight trails for hiking, horseback riding, and cycling. Fishing is also allowed on Lake Wauburg with a boat ramp that provides access for canoes and electric-motorized boats. Gas powered boats are not allowed, according to the Florida State Park website.

The benefits of the two UF parks are the special activity features such as a high ropes course, a rock climbing wall, paddle boats, kayaking, soccer goals and a mountain bike trail. The choice to have the park closer to Micanopy and away from campus was because of the topography and nature, said James.

A person with a Gator1 student identification card can bring up to four guests, James said. “It’s a private lake, it’s a private park,” he added. “It’s funded by activity fees. Who pays for the park? The students pay for the park, and they should get to use it.”

P.J. Worth, who has lived in Micanopy all 37 years of his life, has only used the lake as a guest of someone with a Gator1 card. He said that he understands why the rules apply, but he thinks they should be different.

“I feel that if residents were able to use the [UF] facilities for recreational use that would be great, but I understand why that would not include equipment,” said Worth. He suggested an option could be to offer semester passes to non-students at a fair price, minus the gear. “[I’d be] willing to sign a liability waiver,” he added, “and it would help UF offset some of the cost of upkeep.”

Megan D’Andrea, who grew up a few miles outside of the town limits, also would be willing to pay a fee to access the UF sites. And yet, D’Andrea said she is eager to find out what will happen with the YMCA land.

According to the assistant county manager, Gina Peebles, the YMCA camp’s property includes a greenhouse, horse stables, an Olympic-size pool, a paintball course and an obstacles courses, plus archery, rifle and BB gun ranges.

The 211-acre property is located south of Paynes Prairie and was purchased at an auction in June for $1,025,000, she said.

The decision to purchase the land was about preserving it and giving Alachua County’s children a place to attend camp locally, said Peebles. “If another entity purchased the property, it could be developed for other uses.”

The county advertised a “Request for Interest” to those people and groups interested in buying and managing the property. Three responses were received, she said.

Now, the county must wait to see how the county commission will decide to proceed. Peebles said they can either “declare it surplus and sell it to the highest bidder, or enter an agreement with a group to manage it,” therefore, an official opening date is unknown at this time.

James said there have been talks about opening up the UF parks to locals, but considers it unlikely.  “There is access and everything costs money,” he said. “Except for the students who have paid for this park indirectly through UF fees.” The 20 acres of North Park has been UF owned and operated for 98 years. It was donated to UF by the YMCA between 1918 and 1920, he said. The additional 65 acres at the South Shore were purchased by the UF athletic association and donated the property to the intramural department as a recreation center for students, he said.

Rennee is a reporter for WUFT News who can be reached by calling 352-392-6397 or emailing news@wuft.org.
Previous In St. Augustine, Tourism Concerns Mount Over Panhandling
Next Nurse “Ginny” Goes Above And Beyond To Care For The Medically Underserved In Alachua County