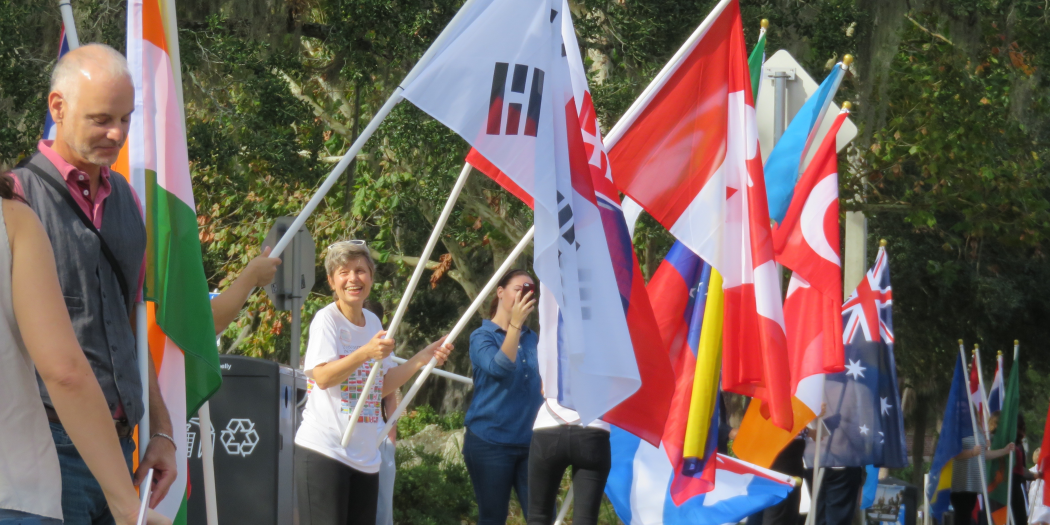 Students and staff marched along Stadium Road Monday, waving more than 50 large flags representing countries from all over the world.

“Awareness of the rest of the world is really important,” said Gabby Khawly, 21, a biology student at UF. Gabby had heard about the event just hours before and felt she had to go. She held one flag for Peru and one for Lebanon.

Marchers started at the West loading area of the Hub and walked down toward Turlington at 10 a.m. They stopped and faced each other from either side of the street, standing in solidarity as they waved the flags of some of the countries represented by international students and scholars on campus.

“This is my first time to hold my flag in behalf of Koreans,” said Han Kwon, 25, a research assistant at UF who is from Korea and has been in the states for 10 months.

“I am so grateful as a Korean to hold my flag among all the countries,” Kwon said. “It’s an honor.”

Christena is a reporter for WUFT News and can be contacted by calling 954-793-6813 or emailing christenacarollo@gmail.com.
Previous Nov. 13, 2017: Afternoon News In 90
Next D- And F-rated Public Schools In Alachua County Face Pressure To Improve Letter Grades

Not even a global pandemic can stop Gainesville theater. The Hippodrome Theatre staff used a …