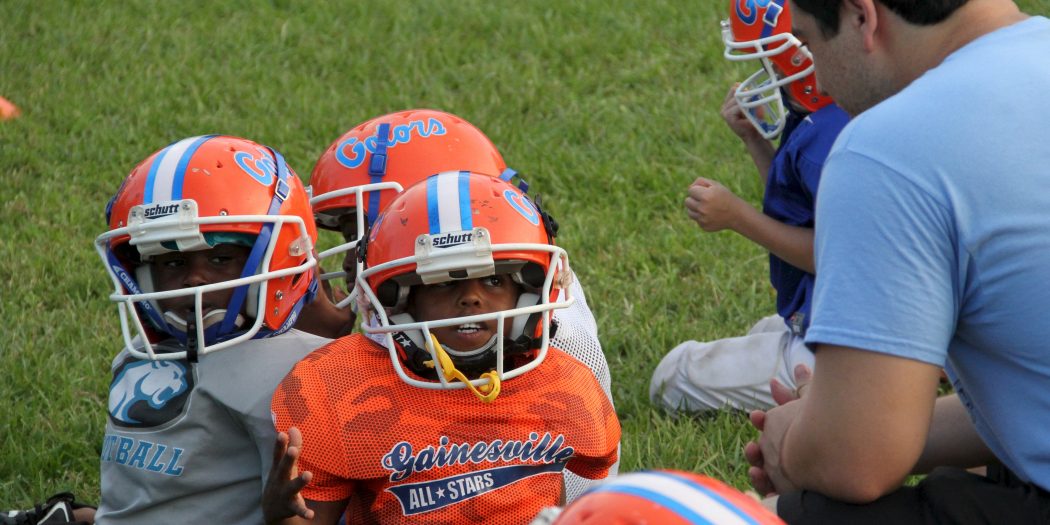 Assistant coach Austin Manning discusses the game with one of his players. The Mighty Mite team ranges from 5-7 years old.

The Tiny Mites youth football team gets ready for practice by tying their shoes (though some don’t know how to just yet), and putting on all their pads and helmets.

With the help of their coaches, the 5- to 7-year-olds finish by adjusting their beloved Gator helmets, and then they hit the field.

They practice by stretching, running, talking about plays and then scrimmaging. In between plays or while getting water, some occasionally remove their helmets, prompting coach John Veilleux to tell them, “Put your helmet back on!” If they don’t listen, it’s a lap around the field.

Veilleux and the other coaches of Gainesville’s Pop Warner youth football and cheerleading program seem to take player safety seriously, as they have teamed up with Athlete Brain, a University of Florida student organization that analyzes the kids’ brain activity outside of practice through baseline concussion testing. This includes balance and memory tests.

“It’s going to be a really good way to see if someone has actually had a concussion,” Veilleux said, “because not all the time the symptoms are cut and dry.”

Concussions in sports — mainly football for boys — have hit the national spotlight in recent years as many players have developed brain ailments from repeated strikes to the head. But concussions aren’t competition level- or age-specific, experts say, so children in sports can be vulnerable just as much as professional athletes.

Athlete Brain is comprised of about 30 UF students studying applied physiology and kinesiology, biology, neuroscience, pre-med and engineering who have completed training in concussion testing. The organization is using child-SCAT3 (sports concussion assessment tool) for their baseline testing.

The testing reveals the athlete’s normal brain activity so doctors can tell whether symptoms after a concussion are from the injury.

Initiatives like baseline concussion testing and protocols after a head hit, like getting pulled out of the game and seeking evaluation by a trained specialist, can help reduce the risk and the severity of an injury, said Dr. Jason Zaremski, a physician in sports medicine at UF.

“It’s important that parents — in this case for their children — understand the ramifications of what a concussion is and how appropriate treatment can mitigate and decrease symptoms and how it can get their child safely back on to the field.”

In addition, the organization educated Pop Warner parents by talking with them about concussions. This, Hausman said, helps them get a clearer view of the risks that might hold them back from letting their kids participate.

Concussions “are kind of like the hot topic recently with the NFL, and a lot of parents see these things that might [be] sensationalized in the news” with professional football players getting dementia-like symptoms at a much earlier age, Hausman said. “So they might hold their child back from participating in group sports and that can hold a child back from gaining a lot of valuable experience.”

However, although the level of contact is much more powerful in middle and high school football, the city of Gainesville and the Athlete Brain team found it necessary to begin testing at an early age.

“If we can establish that everyone is going to get baselined before they start playing, then it sets a good precedent of making sure that every player is safe,” Hausman said. “It makes the parents feel like their kids are safer and it gives a source of information for them as well.”

Veilleux, who has coached for Pop Warner since 2009, also teaches his young players different techniques for safe tackling to further avoid injuries, like tackling with their shoulders rather than with their helmet.

“Baseline testing is another step in a lot of things we are already doing,” Veilleux said. “We try to do a lot of things within practice to match them up with other kids at their level to minimize the chance of a concussion or any other kind of injury. “

As a football-oriented city, Gainesville’s Parks, Recreation and Cultural Affairs department hopes to continue working with Athlete Brain and conduct baseline concussion testing in future seasons and in other sports, like basketball.

“Look, if your child is going to play football, then there’s a higher risk in concussions in football than in any other sport, and if it’s girls and they want to play soccer, then that’s the highest number of concussions in the female related sports,” Zaremski said. “So how can we prevent it? Let’s tackle it the right way.”

Marielena Gonzalez is a reporter with WUFT News and can be reached at 305-308-7183.
Previous Did Hurricane Irma Return Lochloosa Lake’s Water Levels To Normal?
Next Ocala Police Department Is Now Better Equipped To Save Opioid Overdose Victims

The county commission asked questions on Tuesday without indicating which direction it would go in approving, modifying or rejecting the proposal.