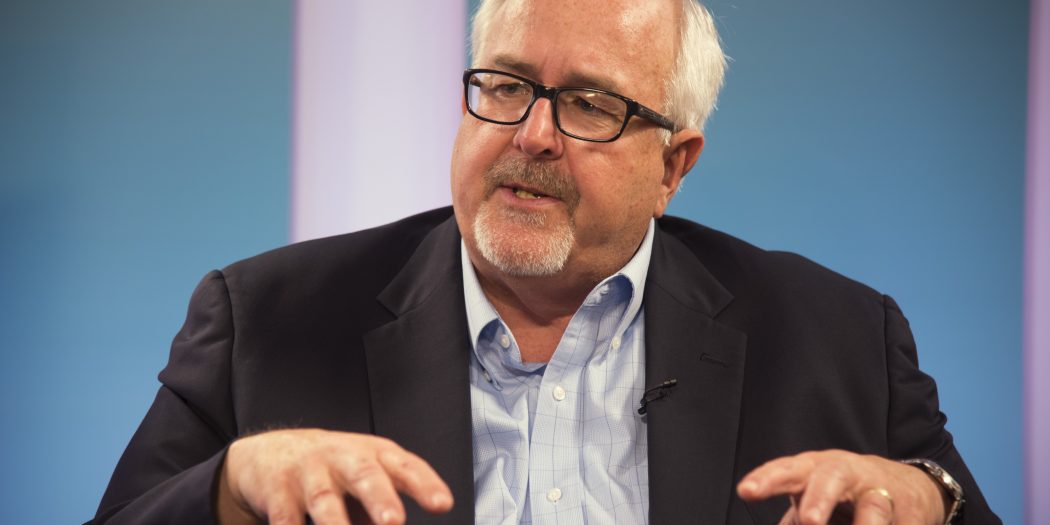 File photo: Former FEMA Administrator Craig Fugate speaks to WUFT's Jeff Huffman and Evyn Moon on March 21, 2017 about FEMA, the approaching hurricane season and his plans after stepping down as the White House transitioned to the Trump administration. (Gary W. Green/WUFT News)

The full questions and responses below have been edited for clarity and brevity.

QUESTION: How do you respond more effectively to disasters?

Fugate: You start realizing that there is a theoretical point where just responding better isn’t good enough. You’re seeing this play out in Puerto Rico, and right now everyone wants to be an expert and say how everyone is messed up. I got bad news for you — that’s what it is.

When you have an area that big with that much infrastructure, the first part is keeping people alive, it’s not going to be a pretty response, and it’s not going to be what you’re used to seeing because you can’t drive to Puerto Rico, just like you can’t drive to Alaska, Hawaii, the Virgin Islands or Guam.
There’s a lot of challenges that happen with these things but even that started making me ask the question: Why do we have to keep responding to bigger and more complex disasters? We seem to be putting a lot of emphasis on how we respond, and we never really talk about why we’re having to respond.

QUESTION: What did you bring to FEMA?

Fugate: First, I don’t call people disaster victims, I call them survivors. Our job is to support them — not to come in and tell them how to do stuff. The bigger the disaster, the faster the response is going to be, but not from me, not from people with lights and sirens but from your neighbors. Neighbors helping neighbors is the fastest response.
It constantly amazes me how when we talk about planning a response we always talk about what the government is going to do, but we never recognize the role of the public. So, part of this is to call them survivors. They survived it, they’re the closest to it and they need to be part of the team. The victims are the ones we lost and we’ll mourn and bury. But the survivors need to be part of that team.
The second thing is we commonly refer to these things as natural disasters and that’s actually kind of an excuse — it’s an act of god. Disasters are disasters, there’s nothing natural about them. We have natural hazards, but they only become disasters how and where we build. It’s how we build and where we build that makes things disasters.

QUESTION: Why are disasters getting bigger?

Fugate: Well the hazards are getting more intense just from the standpoint of, if you look at the number of rainfall events exceeding a 100-year event. When I got to FEMA, 100-year events meant every couple of weeks and 500 year events meant every couple of months.
The number of disaster events are increasing, and the cycle between events is increasing. We were supposed to be in an El Niño year, which means below average rainfall. But, we seem to be getting more natural hazards in higher frequency, duration and intensities that don’t really resonant with our past history.
Think about Houston, in the last ten years, they’ve had 500-year events three times. When you look back in our history you can’t find this many extreme rainfall events of this concentration all across the country.
Most people don’t realize how bad the floods were in Louisiana last year. People know about Hurricane Matthew because it grazed us, but the Louisiana flood got lost between the Olympics and the election.

QUESTION: Is it climate disruption or climate change?

Fugate: I don’t believe in climate change. That’s not a belief system because you can prove and disprove climate change. There’s data there. It’s factual. It’s happening. Every hurricane this year has broken records, think about that. Hurricane Harvey, Irma and Maria broke records. How is looking at past data going to help me if the past three hurricanes that hit this year all broke records? Yet, if you go to the federal plan for rebuilding we’re going to build back to past data.
Disasters both in cost and frequency are increasing. It isn’t just that the climate has changed, it’s that we’re building in more places in increasing populations of hazards that we haven’t thought about how we’re building and what we can do to mitigate that.
What’s really going on with disasters, yes, they’re getting bigger and more frequent, but it’s because we’re building in ways that aren’t sustainable because we’re pricing risk so low we’re not changing behavior.

QUESTION: For local and state governments their big risk would be if all these properties got hit and destroyed, how are they going to rebuild and recover?

Fugate: Fortunately, we have FEMA and the disaster systems programs administered by us where the governor certifies to the president that it’s exceeded all it’s capabilities of the state and that the state cannot possibly recover without the support of the federal government. The only thing FEMA pays for is uninsured losses. We do not pay for things that are insured.
When Sandy hit, FEMA paid for nine hospitals because they were either non-profit, government-based or uninsured and suffered billions of dollars of losses.
Start adding up all the people from Texas, Florida and Puerto Rico, and now there are millions of people who didn’t just have their power go out or have a tree go through the roof —they’ve lost everything. And they’re now totally dependent on FEMA programs that will at least start the recovery (process).
If we address our risk and price it appropriately, we can change behaviors and outcomes. Our past is not a good indicator of our future.
When you have three hurricanes back-to-back that all set records and you’re telling me we’re going to look at past data to figure out how we’re going to build to the future, I (asking myself) what part of this aren’t you getting?
As long as we price risk too cheap, there’s no incentive to change behavior. Risk will constantly grow, disasters will get bigger and you, the taxpayer, will pay. Don’t build back to past events, build to future risks.

Magen Brubaker is a WUFT reporter and can be contacted by calling 850-572-5006 or by emailing magenbrubaker@gmail.com.
@@MagenBrubaker
Previous Florida Voter Rights Restoration Supporters Collected 124,000 Signatures For Issue To Reach The Ballot
Next Hippodrome Collecting Hurricane Relief Supplies For Puerto Rico