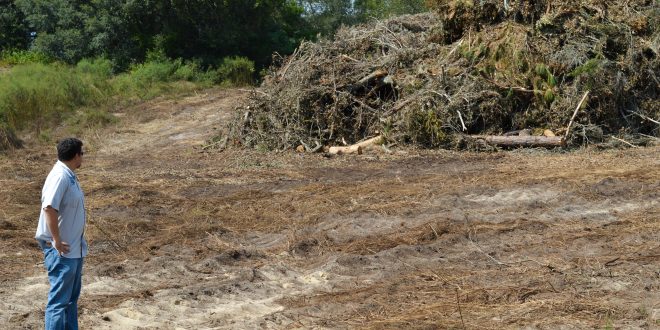 North Central Florida counties have submitted their plans for debris cleanup following Gov. Rick Scott’s Monday directive that they do so, and one, Columbia County, says it’s almost done.

In Alachua County, debris collection began last week, and the full process — which includes three collection trips through all neighborhoods and disposing of it — will take about three months, said Sally Palmi, Alachua County’s director of solid waste and resource recovery.

“It’s going to take a little time,” she said. “I don’t want residents to think it’s all going to be on the curb for three months, but that’s the time it will take to do the three passes through the county.”

To have their debris collected, residents should consolidate all wood and other vegetative debris into large piles at the curb to make it easier for collection and processing, Palmi said.

The county is using two vendors for debris clean-up: Ashbritt Environmental and Witt O’Brien’s. The vendors cannot pick up any vegetation or trash placed in containers, so the county’s regular curbside vendors will be collecting those, she said.

The collection sites the vendors manage are not open for public dumping, she said. However, citizens can go to regular landfills to dispose of their debris.

“Sometimes, people get anxious, and they want to clean this up themselves,” Palmi said. “We will be opening three sites sometime soon for our citizens.”

Those three additional landfill sites haven’t been announced yet, she said, but residents can watch for them online.

Meanwhile, in Columbia County, County Manager Ben Scott said that the debris-management plan has already been enacted and is nearing completion.

Columbia isn’t using vendors and is instead doing its collections in-house. The county is expecting to finish cleaning up almost all debris by Friday, Ben Scott said.

“We are almost done,” he said.

But the county won’t clean debris from private property. Instead, residents should consolidate any debris and put it along the road for pick-up, Ben Scott said.

In Dixie County, residents should not leave debris on the roadside but should instead take it to one of 10 sites located around the county. From there, county officials will dispose of the debris, according to Scott Garner, division chief of emergency management for Dixie County.

In Marion County, 1,275 tons of debris have been collected since Sept. 10, county spokeswoman Stacie Causey said. But the county hasn’t yet begun organized pick-up.

“Though we are currently picking up debris, we aren’t route-based yet due to areas with power-line entanglements and the amount of debris on the ground,” Causey wrote in an email.

Once organized routes do begin, the county is planning on making two passes through the full county for collection, she said. All vegetation should be separate from household and construction debris and should not be placed in any types of containers.

Marion County citizens also have the option to take debris to drop-off locations themselves, she said. The Baseline, Martel and Newton landfills in Ocala and the Davis landfill in Ocklawaha are open for now from 7 a.m. to 5 p.m. seven days a week to help reduce the debris load.

Palmi, in Alachua County, said she appreciates residents’ patience and cooperation as North Central Florida continues to recover from Irma.

“We just really appreciate everyone coming together to help us recover from this event,” she said.

Dakota is a reporter for WUFT News who can be reached at 352-392-6397 or d.williams@ufl.edu.
@@dkwill123
Previous Hurricane Irma Flooding Creates Haven For Mosquitoes
Next Salvation Army Provides Northeast Floridians With Food And Support After Irma