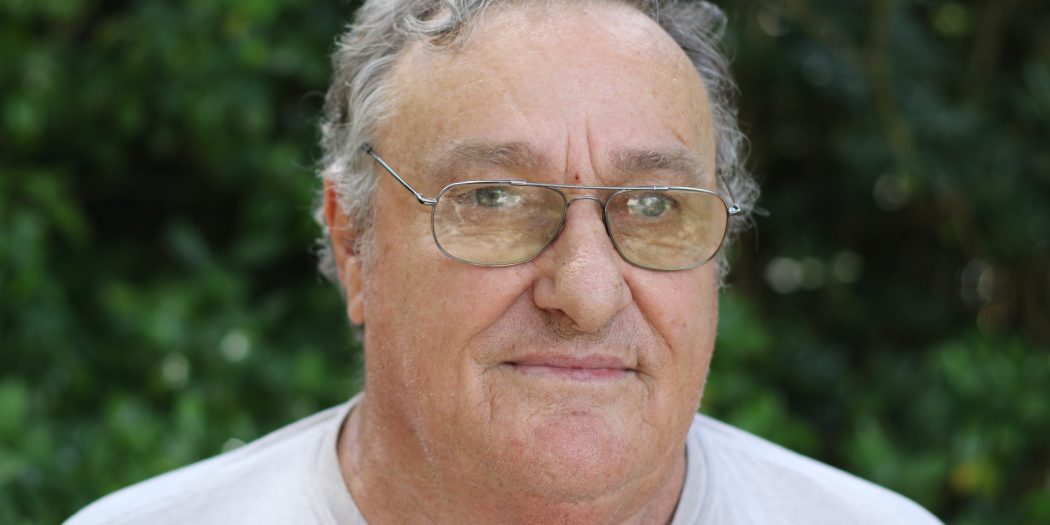 While aboard the USS Coral in the Gulf of Tonkin for the U.S. Navy, Raymond Knisley knew little about what it is his ship was doing as part of the Vietnam War effort. He would receive newspaper clippings from his parents, often a month after an operation, showing what the Coral crew had bombed, and he said, ‘we never knew anything about it.’ Today, he knows quite a lot about goat farming. He and his wife, Pam, own Carriage House Farm in Chiefland with 200 myotonic fainting goats. Our conversation took place in their home on Aug. 23, 2017.

(My name is) Raymond Knisley. Born in Hale Hospital in Haverill, Massachusetts, on July 31, 1947. I lived in Tyngsborough, Massachusetts, until I went into the service when I was 17.

High school. I enlisted into the Navy. I wanted to go into the Seabees because everybody in my family was in construction, building homes and stuff. I thought the Seabees would be great. That was the last choice the Navy had for me.

Do you remember the first moment you heard about a conflict in Vietnam?

Sometime in high school, I’m sure. I don’t remember the exact time. I remember one of my school friends was in a band, and he was trying to starve himself so he would be 4-F. He ended up being about 85 pounds or something when the draft called him in. He didn’t accepted, naturally.

What year was that?

1965. I met a guy that was an Indian a few years ago that was the first American captured in 1960. If I’m remembering it right, he spent a year in prison before they let him out.

Two of my friends from my 8th grade class got killed in Vietnam. Their names are on the wall. One of them got killed in 1971. I don’t remember the date of the other one.

When you told your parents you wanted to enlist in the Navy, what did they say?

They backed me. My father was in the Army, an ex-POW who got captured by the Germans. My uncle was in the Navy in World War II and worked for McArthur out in the Pacific. I don’t know what he did, maybe out on a tin can destroyer.

So you came from a line of service then.

What were your total years of service then?

I did (Recruit Training Command) Great Lakes for boot camp, and then I went to Clark Air Force Base north of San Francisco, and then they shipped me to the Philippines. When I got to the Philippines, I was completely broke. Had no money. So they gave me a bed, anyway, and fed me. I got a partial pay when I complained I couldn’t survive without a little cash. I was there about a week and a half with no money before they gave me some. Then I got aboard the USS Mt. Rainier, an ammunition supply ship, and we went out to the Gulf of Tonkin, and they high-lined me onto the USS Coral Sea. Couple of ropes, some guys on each end pulling the ropes, and you’re in a little basket with another guy. The thing is swooping up and down toward the water.

Why did they do that?

Why? Probably just for the practice, because they had perfectly good helicopters on there, and they were shipping the supplies back and forth. They could have shipped us just as easily. It was kind of unnerving because they had these twin brothers from someplace in Texas, and one of the brothers was scared to get on the thing and was screaming and crying and carrying on… Oh, that was certainly an adventure.

Over the water. Not quite 100 feet. The deck on the Rainier was much lower than the deck on the aircraft carrier. I think the bow of the ship was somewhere around 80 feet off the water. One of the trips, a couple of the guys got wet feet. I’m sure that scared the crap out of them.

Did you end up in country?

We were in the Gulf of Tonkin when I transferred. When I got on board the Coral Sea, I was there for 40 days in the combat zone. Then they ended the cruise and we headed back to the states. We spent a few months in the states refitting the ship and then headed back. I actually did like three and a half cruises. On my DD-214, it gives me credit for three cruises… I think I should have gotten credit for four cruises.

What were some of your responsibilities on board the Rainier?

I started out working in the gym, then spent the first 90 days working as a mess cook. They just needed somebody for mess cooking. I wanted to be in the Seabees, so my designation was nothing for an aircraft carrier. The Navy wanted me to be an aviation machinist’s mate, but they needed extra bodies on the aircraft carrier and sent me there. I didn’t get any of my three choices they guaranteed I would get. I got stuck and worked for the X Division and in the gym and radio station. I did some disc jockeying and learned from guys that knew what they were doing… It’s a small city. There’s 4,200 guys on the ship.

Did your ship have any contact with enemy in the Tonkin?

Occasionally, we’d hear rumors about a North Vietnamese gun boat coming out, and you’d see the phantom (jets) take off from the flight deck, and half hour later they’d land again. And no more gun boat. We didn’t really see too much of it.

While you were near Vietnam, did anything surprise you about the American operation?

We absolutely were in the dark about what we were doing.

We absolutely were in the dark about what we were doing. My parents would send me newspaper clippings that were like a month old. We’d get those, and that’s the only way we knew what was going on. I wasn’t in the circle that needed to know anything, and they just didn’t tell you anything. My parents sent stuff about different things we had blown up, and we never knew anything about it.

When you say stuff ‘we’ had blown up, is that America’s military or the ship?

Our ship. Our ship had done things, and I got clippings from my parents telling us about it, and that’s the only way we knew what the ship did.

Because you went in so young, you were probably a different person three years later by the time you came out, right?

I don’t know if I changed much. When I went in, my parents were the dumbest people on Earth. When I got out, they had miraculously gotten a lot smarter. Noteworthy.

I was glad to get out. I didn’t like the crap. They put a couple of stripes on somebody, and they want to push you around, get you to do stupid stuff. I wouldn’t want to do it again. I did my job, and that was the extent of it.

So you get back stateside sometime in 1968?

The beginning of July I think. I worked around the ship until I got out.

Where’d you go after that?

Back to Massachusetts. Became a carpenter. I had problems with alcohol and drugs for quite a few years, went through a marriage. After the blizzard in 1978, I moved to Florida. Had enough snow and (needed a) change of scenery. I got a job down here, finally quit drinking. Couple years later, I quit smoking. Turned my life around. Later, I went into the well-drilling business. I went to work for the guy for $4 an hour around 1983. I worked for him for two years, got my license and bought him out. West Palm Beach. Did that for a few years, met Pam (my wife) who had horses. And I had horses. We decided to start doing some of the horse business… One thing led to the next, and we ended up buying a piece of bare land in Ft. Pierce… had that for 10 years. After the hurricanes in 2005, we decided to sell out and moved here (to Chiefland), semi-retired and got in the goat business.

Did you have any lasting health consequences from your service?

I believe I was dosed from Agent Orange.

I believe I was dosed from Agent Orange. They were supposedly putting it on the ships, on the planes, taking it over there and dumping it. I’ve read a couple articles on it that claim blue water sailors should have gotten treatment for it. I’ve had some lumps on me that the VA has removed. I’m kind of in the program, but I don’t get a stipend for it. They’re saying there never was any on the ship. They say there were never any nukes on the ship, and there definitely was. What they say and what actually happened are two different things. The government says stuff at their own convenience.

(Was Agent Orange) in canisters or big barrels? How did they carry the actual chemical?

I served my time. Did what I was supposed to do.

It was things that looked like tanks on the bottom of the wings (of jets). There’s plenty of them around… They’d spray the stuff out of them. They didn’t actually drop them. They came back with them. Open ‘em up somehow and spray them around. They were handling them on the ship, and I got these lumps on me and stuff. Ended up losing all my teeth, and I had several of the symptoms.

Are there any avenues left you’re trying to fight to get VA coverage?

No. They promised me health care for life when I went in… I served my time. Did what I was supposed to do.