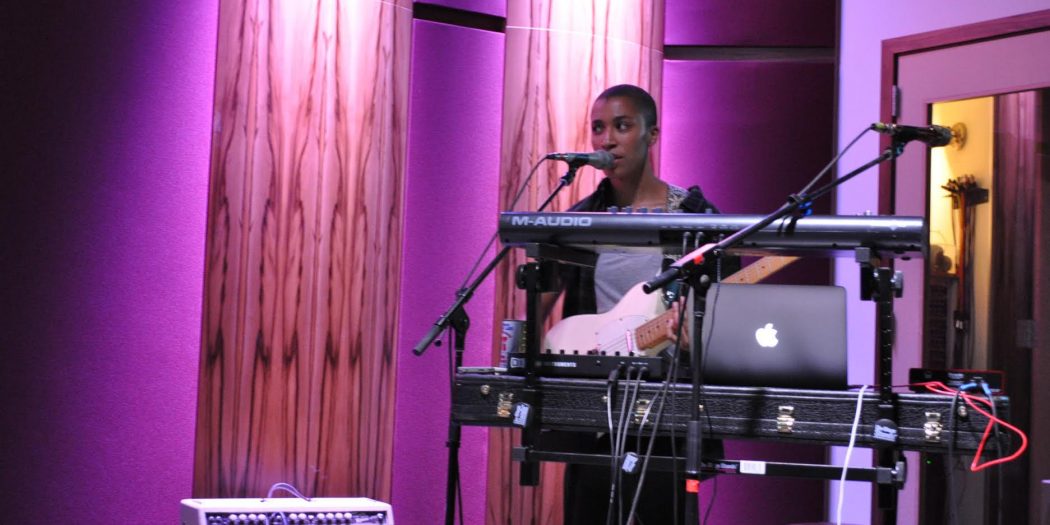 DVWEZ rehearses at Heartwood Sound Stage in Gainesville for her upcoming show on April 15th, the Paradise Experience.

Comfortably perched on a worn, wooden barstool in a rehearsal studio, Delia Albert’s scuffed white converse hang languidly beneath her as she runs her fingers tiredly over her freshly-shorn head. Albert, better known by her stage name, DVWEZ (pronounced Dames), is preparing for her April 15 performance, the Paradise Experience.

It’s late and although she’s tired, when she stands up and grabs the microphone, her entire body transforms. Her eyes close as she sways to the rhythm of the pulsing, electronic R&B music blasting from the speakers as her hands move to her computer and keyboard, creating a series of mesmerizing, synthesized sounds.

DVWEZ, an Orlando native, first discovered her passion for music when she began taking piano classes at age 7. By the time she turned 11, she was in her first band, one she ended up being in with the same group of people all the way until college. It wasn’t until when she was attending school at the University of Florida that DVWEZ met a friend who introduced her to producing software, that her music began to evolve.

“Basically [the software] let me put down ideas and not just write it in a way that is kind of temporary and that’s how DVWEZ started,” she explained. “With this new program, I was able to do my own stuff, and I guess explore those ideas, then in 2015 after I graduated, I started writing a bunch and did an EP and from there it’s just been going.”

DVWEZ explained the inspiration behind her stage name, which means “Girls.”

“I wanted that to be the forefront of it because I wanted [my sexuality] to just not be hidden,” she explained. “A lot of lesbian artists if they’re referring to a love interest will say ‘they’ instead of ‘she,’ and I don’t do that. I just say ‘she’ or ‘her’ because I want that visibility to be known, and I think it’s important.”

Her first project, ‘Pastels,’ was a six-song EP that she wrote and produced entirely on her own. Her new project, ‘Paradise,’ will debut at her upcoming show, which she describes as a live visual experience. She explained she was inspired to create a visual show after visiting music festivals and seeing what other artists were doing to combine technology and music.

“The whole point is I feel like I’ve seen so many bands just play a show where it’s them and it’s cool, but it doesn’t really give you a submersive experience where you can see kind of visually what they were thinking musically,” DVWEZ said.

After throwing a Kickstarter, a funding platform for creative projects, she raised enough money to create the show she had envisioned, which combines music, art, live video and projection mapping.

“What that involves is, basically, my friend DJ is going to be creating different structural elements around me and then projecting video footage that we shot specifically for this show to accompany the tracks,” DVWEZ said. “But he will also be doing what’s called projection mapping, which is basically like live-editing the footage so it makes sense with what’s happening. So, it’s not something that can be replicated because he— in a sense—is preforming live with me as well. No one performance will ever be the same.”

Reid Casey, who plays drums and percussion for DVWEZ, said this style of performance is not something you would usually see in Gainesville.

“Triggering electronic sounds in as live a way as possible and adapting them to a live performance is what’s really unique, and it doesn’t happen that much, in Gainesville especially,” Casey said. “Local acts aren’t really doing it, it’s more the major acts that are doing electronic triggering.”

The creator behind the visual aspects of the Paradise Experience show, David (DJ) Lajas, explained the creative process behind developing a performance like this.

“My work flow goes in order of making a installation idea, building it, editing content to map, then projecting and masking the scene,” Lajas described. “I also use a music controller for my content which allows me to change clips, and drop effects.”

He said for this new project with DVWEZ, he created a life-sized pyramid and a box which will have her inside, and he used transparent materials so you can still see her within in the shapes, while also being able to see the video that is projected as well.

“For the first time, I also will be adding LED strips to the mix and that will be part of the installation,” Lajas said.

Another unique aspect of DVEWZ’ Paradise Experience show is the location. DVWEZ will perform at Heartwood Sound Stage, a relatively new venue in Gainesville. Heartwood enables DVWEZ to do a live recording of both the audio and visual aspects of the show at the same time.

“That’s what they specialize in, so Heartwood was really the only place I could get that done at such a high quality,” DVWEZ said.

Matthew Fowler, Heartwood manager, elaborated on the benefits the facility has to offer.

“We’re a fairly new venue, so we’ve only done a handful of shows,” Fowler said. “We opened on Feb. 25th that was the Heartwood Music Festival, and then since then we’ve done four or five shows, and I think three of them have been sold out, so that’s awesome.”

However, Heartwood has never hosted anything like the Paradise Experience before.

“We’ve never had a live projection mapping here before,” Fowler said. “I’ve certainly never seen one live, so we are all a little bit interested as to how that’s going to go.”

DVWEZ elaborated that they will be filming the show and then trying to put together a promotional edit to hopefully bring the show elsewhere.

“I’m not always gonna do this. It’s a special thing in that people would have to basically ask for me to bring this experience to them because it is expensive it put on, so that’s really the whole point: to capture it,” she said. “I think this show is something that will inspire the people of Gainesville because it’s passionate people doing what they love,” Lajas added. “I feel that DVWEZ music with the projection mapping is a perfect mix that allows people to get lost and feel something instead of just standing around at a show. It’s something that they will really want to see.”

Ashleigh Braun is a reporter for WUFT News and can be reached at 954 551 5626 or abraun215@ufl.edu.
@@ashleighbraun2
Previous Activists Push For Ex-Felon Voter Rights Restoration
Next April 14, 2017: Morning News in 90

Program directors were creative in reworking art and craft programs for students.