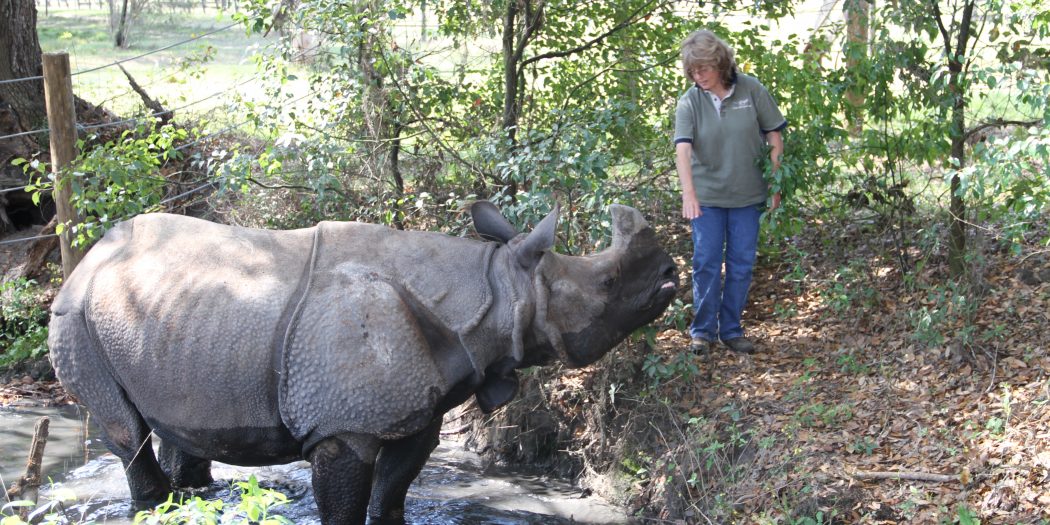 Christine Janks extends her hand to pet Henry who stands in his pond at the conservation foundation. Janks is hoping to have Henry’s shelter rebuilt as soon as possible to protect him from low temperatures. (Katie Mellinger/WUFT News)

Charred rubble is all that remains of Henry’s home.

In an electrical fire Sunday, the 35-year-old lost everything to his name, but was spared his life because of the quick thinking of his best friend Barry.

Henry, a 4,600 lb. Indian Rhinoceros, was lounging under his wooden shelter when a fire broke out, startling both him and his handlers at Carson Springs Wildlife Conservation Foundation.

Henry came to Carson Springs from the Tanganyika Animal Park in Wichita, Kansas, on Nov. 19, 2016, to relax after serving as the leading Indian Rhino breeder in the country, said Barry Janks, who founded the non-profit shelter with his wife, Christine Janks.

“Henry has at least 30 children in the U.S. and close to 60 grandchildren,” Barry Janks said. “I guarantee every Indian Rhino in the U.S., the younger ones, they’re all Henry’s babies.”

Sunday was anything but relaxing for the rhino as his home was engulfed in flames and smoke within just 10 seconds, Barry Janks said.

After hearing about the flames from a volunteer, Barry Janks rushed to the enclosure from his neighboring home and tirelessly worked to move Henry to safety.

“I was just horrified for him… That’s his house, his home. Even though he likes to stay out here most of the time. They feel safe in their place,” Barry Janks said. “All I could think about was just keeping him from going back in.”

“(With the) building gone, 20 percent of his fence is gone, and he is essentially loose,” Christine Janks said.

With the fence in progress, Barry Janks guided Henry to his pond.

“Animals, when they fear something, they want to go is the place they feel safe. And the place he feels safe is his stall in the building,” Christine Janks said. “Regardless of what else is going on he thinks the best thing for him to do is to get into the building, and so it really took a lot for Barry to turn him away from the building and convince him to follow him down by the water.”

Henry made it out of the fire mostly unscathed, minus a few scratches. Barry Janks, on the other hand, tore several ligaments in his foot.

Despite his need for medical attention, Barry Janks stayed by Henry’s side, plopping himself at the edge of Henry’s pound. There, Barry Janks comforted the frightened rhino for 4.5 hours until Henry finally decided to have a bite to eat.

“When he went to eat, I knew things were good. Henry was back to his normal self,” Barry Janks said.

While Henry’s appetite has returned to normal, Christine Janks says the rhino is still anxious because of his destroyed home.

The Janks are hoping to clear the debris and rebuild Henry’s home as soon as possible, especially with the looming drop in temperatures.

“He cannot take cold weather at all, so even down to the 50s and 40s is hard on him, especially since he’s a really old man,” Christine Janks said.

“Gainesville, Alachua County, is just an amazing place to live. What a town? What a people?” Barry Janks said.

Ellie, a German Shepard, saved her owner's life after alerting his neighbor to call for help after Lothar Weimann suffered a stroke.