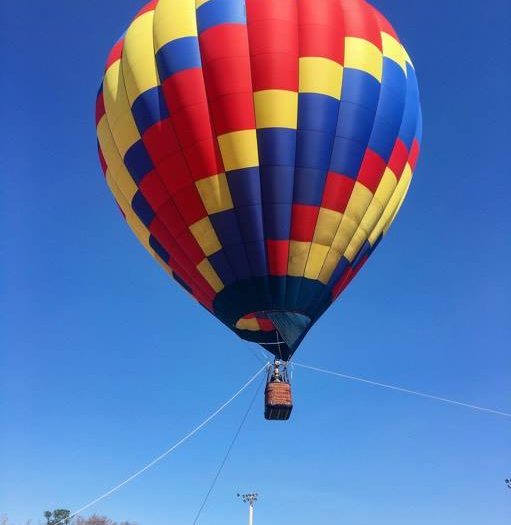 Activists for mental health awareness initiative Mind the Gap...the Time is Now! raise a hot air balloon. “We wanted to bring the significance of having a physical representation of what it is to let your worries take flight,” said event coordinator Kisa Mugwanya. (Alexis Cruz/WUFT News)

A national initiative called Mind the Gap made its way to the University of Florida campus inspiring students to rise up to mental health issues.

Organizers literally lifted each other up in a hot air balloon to inspire students to look at a bigger picture and gain perspective into their own personal health.

“We wanted to bring the significance of having a physical representation of what it is to let your worries take flight,” said event coordinator, Kisa Mugwanya.

A recent study conducted by University Primetime reported that UF ranks 47th on a list of the top 50 universities with the most stressed out student bodies.

“There’s a gap in how we acknowledge how we take care of our physical and mental health. So mind the gap is us asking people to pay attention and take action in how they take care of how their mind is doing,” said Mugwanya.

According to the National Mental Health Alliance (NAMI), these are the most recent statistics from mental health studies across college campuses:

Mind the Gap was designed for the Campaign To Change Direction, a national not-for-profit campaign that aims to change how mental health is viewed in America and to make sure those with mental health issues are given the help they need. The University of Florida Bateman team put its own twist on the idea.

“It is important to think about the balance with your physical health and all of the universities participating in this campaign are designing their campaigns around that concept,” said professor and faculty advisor Deanna Pelfrey.

To continue the month of awareness, the group will bring a panel of UF students who have faced mental health challenges to speak March 1st at the Reitz Union Chamber from 6:30 p.m to 8:30 p.m.

Alexis is a reporter for WUFT News and can be contacted by calling 352-392-6397 or emailing news@wuft.org.
Previous Gainesville’s Newest Music Venue To Debut During Heartwood Music Festival
Next Seven Months Of Captivity: The True Story Of Matthew Schrier’s Escape From Al Qaeda