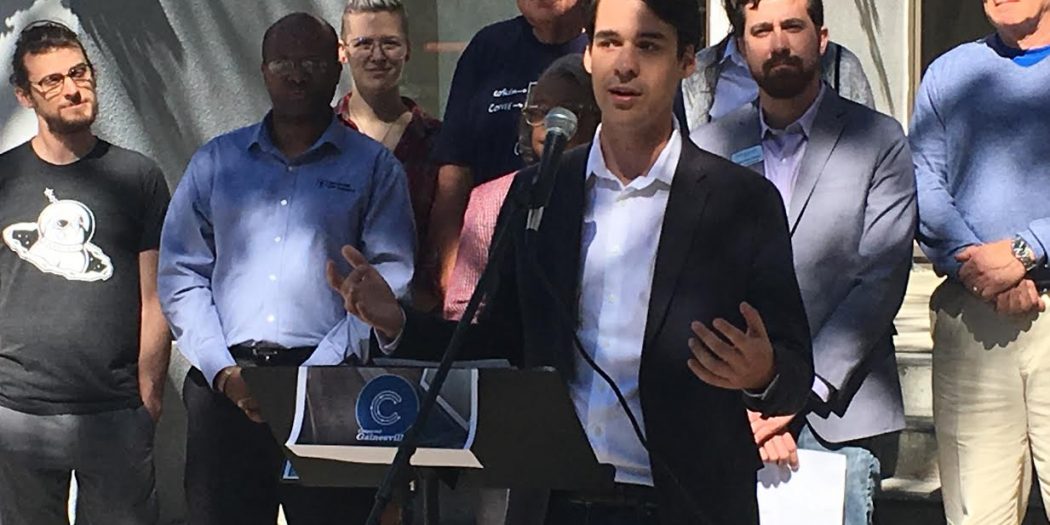 Bryan Eastman speaks in front of members of Connect Gainesville during a press conference Wednesday.

By Nealy Kehres and Ryan Serpico

But he knows he can’t just storm out and find another internet service provider. He, like so many others in Gainesville, always arrives at the same conclusion: it’s Cox or nothing.

“There is not realistic alternatives, and that’s what we need,” he said at City Hall on Wednesday.

Connected Gainesville, an organization fighting for better rates and reliability for the city’s internet, launched Wednesday during a city hall forum. The organization aims to address struggles like Larvenz’s and pursue solutions.

“Our goal is really just to speak to elected officials, bring the topic up, let people know what is going on and pressing them to find solutions and advocate for solutions to the problem,” said Bryan Eastman, co-founder of Connected Gainesville.

According to FCC data, 15% of Alachua County lacks access to a broadband internet connection, which is more than double the statewide average. That’s down from 2015, where data showed the percentage at 22%.

After reaching out to cities across Florida that have a population of at least 100,000, Eastman determined that Gainesville pays the highest rates of any city in the state, excluding coverage.

Although AT&T and GRU’s telecom services hold a presence in Gainesville, it’s so small that Eastman said he believes the lack of competition plays a major role in both the high prices and lack of service improvements.

Cam Johnson, public affairs manager of Cox’s southeast division, said in a statement that the company has invested over $20 million in the area over the past five years, which may have played a part in decreasing the number of people in Alachua County without access to broadband. Johnson also said the company plans to invest another $100 million through 2022, but isn’t necessarily opposed to other internet service providers moving into the area.

“Cox welcomes competition. However, we oppose using public funds to build duplicative networks in areas where broadband services are provided by private entities,” Johnson said. “We stand ready to partner with the city and or county on any and all broadband access projects.”

Connected Gainesville members addressed these problems at their press conference Wednesday. Nine elected officials and community leaders spoke about the issue and then elaborated on how they plan to address it.

Chris Dolphin, another co-founder of Connected Gainesville, said that he and other concerned members of the community had their first meeting at First Magnitude Brewery. There, they spoke with GRU and members of the city about the logistics and decided that conducting a study was the best action.

After researching solutions that have been successful in other cities, Connected Gainesville will present its case and ask the city for funding in February.

“Very young students are expected to navigate the internet,” Hyatt said. “If they don’t have the access then they are gonna be that much [more] behind and really have to work that much harder.”

In the coming weeks, Eastman said the organization will take its first steps by making an effort to get more signatures on its petition.

Connected Gainesville will also host a community event to educate residents about the problem and collect testimonials from people who are particularly frustrated with the situation. Rallying support is important for when they eventually face a city commission vote, Eastman said.

“So what we’re trying to do now is begin the conversation and start to move in the right direction so that we can solve this problem and be a 21st century city,” he said.

At home, Stephanie Karolus doesn’t have Wi-Fi.  Instead, Karolus, 31, would rely on her mobile …