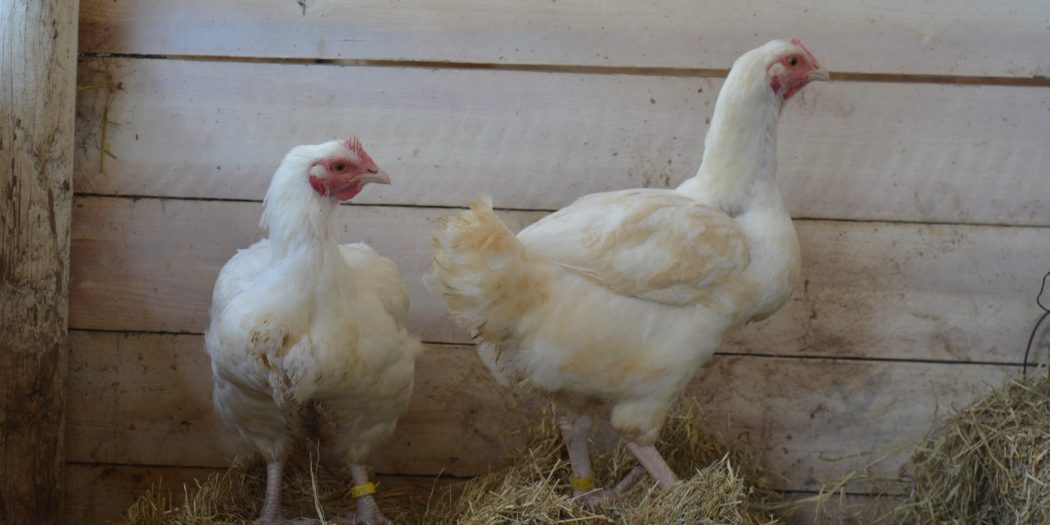 Olive, left, and Hillary, right, sit in their coop. They were two of seven chickens taken in by Kindred Spirits Sanctuary in Ocala after being saved from a religious sacrifice. (Caitlin Ostroff/WUFT News)

Travelling for two days and almost 1,000 miles, Cameron O’Steen packed about 30 chickens into the backseat of his blue Prius to give them another chance at life.

O’Steen had called Kindred Spirits Sanctuary, a farm animal sanctuary in Ocala, in late November to find a home for some chickens rescued in Brooklyn from being used in a Jewish kaparot ceremony, said Logan Vindett, the executive director of Kindred Spirits Sanctuary. During the ritual, chickens are slaughtered and donated to a charitable cause, according to the Chabad website.

A former volunteer at Kindred Spirits, O’Steen asked Vindett if she wanted to take eight. She didn’t hesitate to say yes.

For about a month, Indraloka Animal Sanctuary in Mehoopany, Pennsylvania, had been caring for the animals and was looking for permanent homes. Vindett saw it as an opportunity to save a few lives and teach visitors to the sanctuary about the cruelty chickens face.

“We were excited to tell a different story than some of our other animals have,” she said.

The 30 chickens were among about 200 rescued from the tradition observed by thousands of Brooklyn’s Hasidic Jews on Yom Kippur, the Jewish day of atonement, Vindett, 31, said.

In mid-December, O’Steen drove down the eastern seaboard, stopping in North Carolina to drop 23 of the chickens off at another sanctuary.

Though Kindred Spirits had prepared for eight chickens, one named Pepper died of a heart attack on the way down, Vindett said. The Cornish Cross Broiler chickens, who came from a factory farm, are prone to medical issues due to their weight.

To make the transition as easy as possibly for the already delicate birds, Vindett started replicating their diet at Indraloka and preparing a wooden coop.

In December, O’Steen pulled up to the sanctuary with seven chickens in tow. Vindett and Michelle Lovegrove, Kindred Spirit’s marketing director, donned gloves and booties to meet the then 5-month-old chickens Memphis, Dylan, Hillary, Ginsburg, Wasabi, Olive and Jill. All but Ginsburg had been named at Indraloka.

For an hour and a half, they examined the birds, writing their markings and condition down on their charts, she said. As a precaution, they were quarantined for a month to ensure the safety of the sanctuary’s 18 other chickens.

During that month, Vindett and Lovegrove saw the chickens’ personalities emerge.

Memphis and Dylan are pushy. Hillary, Ginsburg and Wasabi are sweet and like to be talked to.

Olive and Jill are independent.

On Jan. 11, Vindett opened the front of the coop, allowing the seven to roam around the property. Despite being on a strict diet, the chickens will likely reach a point where their bodies can no longer support their weight, she said.

Though the birds may not live longer than the next six months, Lovegrove, 28, said she hopes visitors see that chickens are creatures with as much right to live as anyone else. Meat chickens like them are usually killed at 42 days.

“Forty-two days old is a baby whether it’s an animal or a human,” she said.

Vindett hopes visitors see that animals have their own personalities after meeting Memphis, Dylan, Hillary, Ginsburg, Wasabi, Olive and Jill.

“My hope is always that people meet these animals and have a different perspective,” she said. “We really want people to see the animals like they see their dogs and cats at home.”