Their colleague fought the charge, they did not.

He took his case to trial, they did not.

They are going to prison, and he is not.

All pleaded guilty prior to Wednesday, and each testified at former deputy Jesse Terrell’s trial earlier this month. The five white deputies were accused of playing a role in beating the unarmed Price, a black man and suspected drug dealer; Crawford and Hoppel stomped and kicked him, federal prosecutors said, while Amidei and Fitzgerald failed to intervene and stop the beating.

Here is what the judge recommended for each:

They have 14 days to file an appeal, after which point the Federal Bureau of Prisons will decide whether or not to follow Hodges’ suggested sentences.

The sentences were less than what federal law allowed Hodges to recommend. Hoppel, who also pleaded guilty to a charge of obstructing justice, could have spent up to two-and-a-half years in prison. The others could have served up to two years.

But Hodges, who took an hourlong recess to reach his decision on Wednesday, described what influenced his lesser sentence recommendations.

They did not use lethal force to subdue Price.

They did not use weapons — only their hands and feet.

They offered “extraordinary cooperation” to investigators throughout the case.

And they provided “candid, full, and truthful” testimony during Terrell’s trial, which Hodges said caused them further ostracization from former colleagues and friends.

He was unwilling, however, to recommend only probation or home detention for the four, as their attorneys had asked. “We’re dealing with a serious offense — legally as well as socially,” he said. “This is at the forefront of our social consciousness at the moment.”

He, along with prosecutor Mark Blumberg, made multiple references to high-profile cases of police using excessive force against African Americans during the past two years. (The police shooting of unarmed teenager Michael Brown in Ferguson, Mo., occurred two days after Price was beaten in Marion County on August 7, 2014.)

“If I treat it too leniently, and there is a temptation to do so,” Hodges said, “it invites public disrespect.”

Each of the men’s attorneys argued for that leniency before Hodges reached his conclusion. Hoppel’s attorney argued that law enforcement officers are often subjected to “high-intensity situations,” which could have led to Hoppel’s use of excessive force.

Hoppel’s older brother, Jesse Hoppel, offered this defense of his brother’s mindset: “If they don’t go 100 percent, maybe that fellow’s holding a gun, and my brother’s dead, and right now we’ve all forgotten about him. But I wouldn’t forget.”

Later, Blumberg described how Crawford and Hoppel admitted to investigators that they liked what they were doing, he said, and that deciding to beat Price wasn’t a result of a high-intensity situation or anger from the job.

“When they put on the uniform, they were living different lives,” the prosecutor said.

Another argument from each former deputy and their defense attorneys was more personal.

“We’re a two-income family, your honor,” Crawford said. None of the men are likely to work in law enforcement again. Hoppel, for example, has trained horses since October 2014. Fitzgerald is now a hunting and fishing guide employed in his family’s business.

The courtroom pews were filled with Crawford’s and the other families, and as it became clear around 2:30 p.m. on Wednesday that Hodges would suggest prison sentences, many of the men and women began to weep.

While all four men apologized for what they did — or did not do, as in the case of Amidei and Fitzgerald — Crawford showed the most emotion as he expressed remorse.

“I’m sorry your honor,” he said, his words halting as he stood before the judge.

“I want to apologize to the government, to my community, to my former coworkers, because I failed each and every one of them.”

He also apologized to Price, who was not in attendance Wednesday and who awaits trial in county court.

“I failed to protect and to serve him,” Crawford said. “We tried to do what was right but made a bad decision that day.”

After Jesse Terrell was indicted in January, investigators released video of the incident.

Without it, prosecutor Mark Blumberg said Wednesday, “we almost certainly wouldn’t be here in court.” The judge later said he agreed.

When Blumberg first flew down from Washington D.C. to meet with Price, the man was surprised.

Black people in his community have negative interactions with police all the time, Price told the prosecutor. He asked, why is his situation any different?

The four deputies will be required to share the restitution costs, the judge said — nearly $6,000 in medical bills as a result of injuries Price suffered.

“This, sadly, is actually run of the mill” in Marion County, Blumberg told the courtroom on Wednesday.

For his part, Sheriff Chris Blair has denied his office having problems with the county’s black community and has disputed a “culture of violence” accusation that was made at Terrell’s trial.

Jesse Terrell is a free man.

In the surveillance video, Terrell can be seen punching or kicking Price’s head more than 20 times. He took his case to trial, and an all-white jury of four men and eight women on April 8 found him not guilty of a civil rights violation. Theirs was a unanimous decision.

Most of the men and their attorneys declined to speak to reporters after exiting the courthouse, with the exception of Therese Misita Truelove, who represented Amidei. 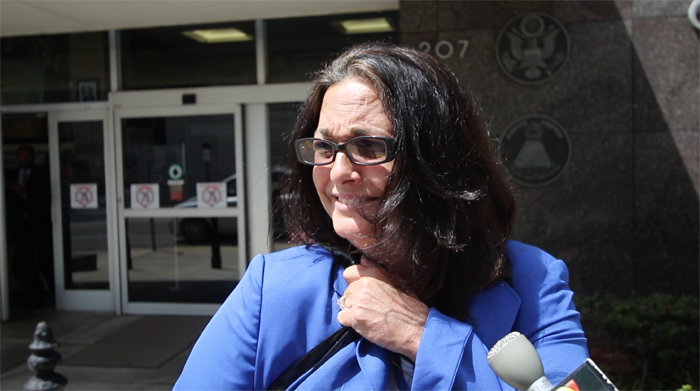 Did she regret not going to trial?

Was she surprised Terrell was found not guilty?

“Absolutely. Have you seen the video?”

Terrell’s attorney, Charles Holloman, was in attendance on Wednesday. Terrell was not. Holloman offered only one reaction to the sentencings as he exited the courthouse.

“Glad we weren’t at that party.”