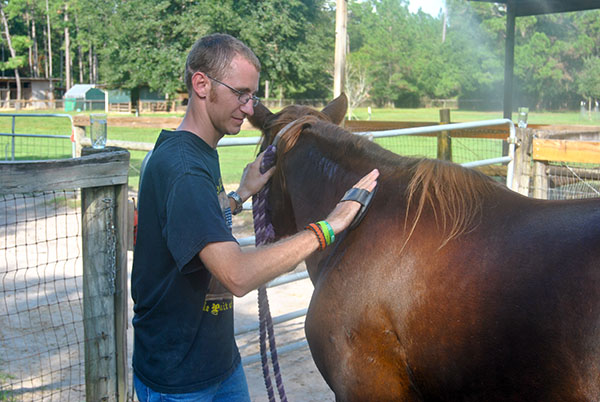 Steve Lawrence, 26, brushes Syddon’s hair at the Sugar Plum Ranch LLC Thursday. He said Syddon is his favorite horse and he instantly felt a connection with her. Lawrence heard about the program while volunteering at Marion County Veterans Helping Veterans Inc.

Veterans in Ocala are trading in their combat boots to transform from soldiers to cowboys.

On a 17-acre farm in Ocklawaha, eight rescued horses at Sugar Plum Ranch have made new friends — three young military veterans who needed them just as much during a time of readjustment.

“Horses are healing animals,” said Jen Elliott, program director of Combat Boots to Cowboy Boots. “That’s how it is.”

Elliott started the strength-based vocational program on her farm through her nonprofit organization, Horse In Miracles Inc.

The five-week training program provides military veterans with the basic skills of horse care needed to become employed on farms.

The first group of participants started on Sept. 24. They  learned to approach, groom, feed and halter horses, clean stalls and use farm equipment.

Elliott said because many veterans who served after 9/11 started at a young age, they returned from the military without any education or job opportunities.

“I wanted to develop something that will make them feel good about themselves,” she said.

When Elliott thinks a participant is ready, she reaches out to various farms in the Ocala area to see where the participant will fit best.

The program not only helps veterans find jobs. It assists them with transitioning, such as overcoming the rush of the military by learning how to have patience with the horses.

“This is a good environment for them,” Elliott said. “They’re not sitting in a little office trying to do something on a computer. They’re outside interacting.”

The group meets Tuesdays from 9 a.m. to 1 p.m. and Thursdays from 1 p.m. to 5 p.m., so participants can get accustomed to the horses’ morning and afternoon routines.

The veterans get weekly worksheets teaching them how to identify specific problems with horses.

Elliott said that with time, the veterans start recognizing details about the horses and their actions, such as when their eyes get big or their nostrils flare.

“That’s where the communication comes — them just noticing,” she said. “That’s how you become a great horseman.”

Elliott said the similar qualities of a rescue horse and a wounded warrior — such as feeling a sense of hyper-vigilance and hyper-awareness, communicating through body language, working in a herd or unit and easily feeling claustrophobic — lead to a mutual understanding between them.

“These guys really get it with the horses,” she said. “If you don’t have that kind of natural instinct and natural experience, it takes a long time.”

Of the three participants, two have gotten part-time jobs on farms in Ocala.

William Drew, one of the participants, joined the military at 16 and started basic training during his junior year of high school. He worked as a combat engineer in the Army National Guard and at a call center for DirecTV for more than five years collectively.

“I couldn’t pick up where I left off with the military,” he said, “and at first it was a bummer because it was something I really wanted to do, but I had to look for something else.” 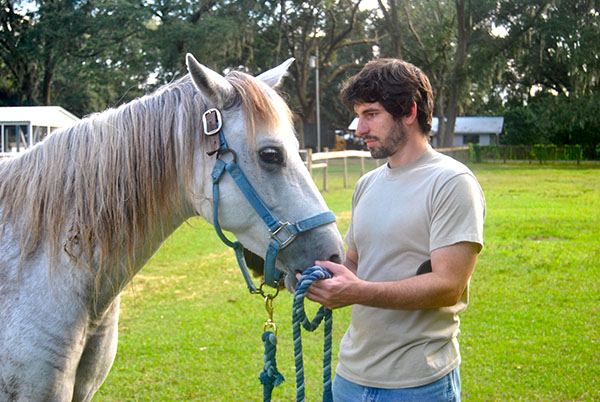 William Drew, 26, grooms Dreamer, a gelding horse who is unable to breed.
Drew said working with the horses is similar to his experience in the army because he has to be aware of his surroundings and anticipate what another person or horse is going to do. “This has been a learning experience for me all the way around,” he said.

At 26, he spent months looking for work in Lake City without any luck until he saw Elliott’s advertisement on ocala4sale.com.

Drew had never been around horses before he started the program. Just four weeks later on Oct. 15, he was offered a weekend job on a farm in Ocala working with world-class Arabian horses.

Frank Hennessey, owner of Hennessey Arabian LLC, said that during his interview, Drew demonstrated a sincere commitment to this program and a willingness to learn.

Hennessey said he intends to continue supporting the program by providing internships for the veterans because this program is designed to fill an acknowledged need.

Barb Hall, an instructor for the program and member of the Horse In Miracles Inc. Board of Directors, has been in the horse business for 50 years. She said the most rewarding part has been to see the boys learn and be happy.

According to Elliott, it has been helpful for the veterans to hear from Hall’s perspective and her own.

“We both have such different ideas about things,” she said, “but that helps because every farm is different.”

Drew said he has learned a great deal from both instructors.

“Without them, I don’t know where I would be right now to be honest,” Drew said. “I’d probably still be looking for work.”

Elliott said that although the horses are usually suspicious of humans because they have been abused and mistreated, they also benefit from the program.

“They need to learn other humans are OK,” she said. “Now they’ve learned we have four people who take care of them and love them.

The program is open to veterans of all ages, including the disabled and even those not necessarily looking for employment, but who want to learn and be around horses.

The next group of participants will start in January.

Elliott said she wants the program to be free for veterans. She is trying to get the community involved by sponsoring a veteran for $500.

“The appreciation that they have for the horses is just wonderful,” Elliott said. “It makes your heart sing.” 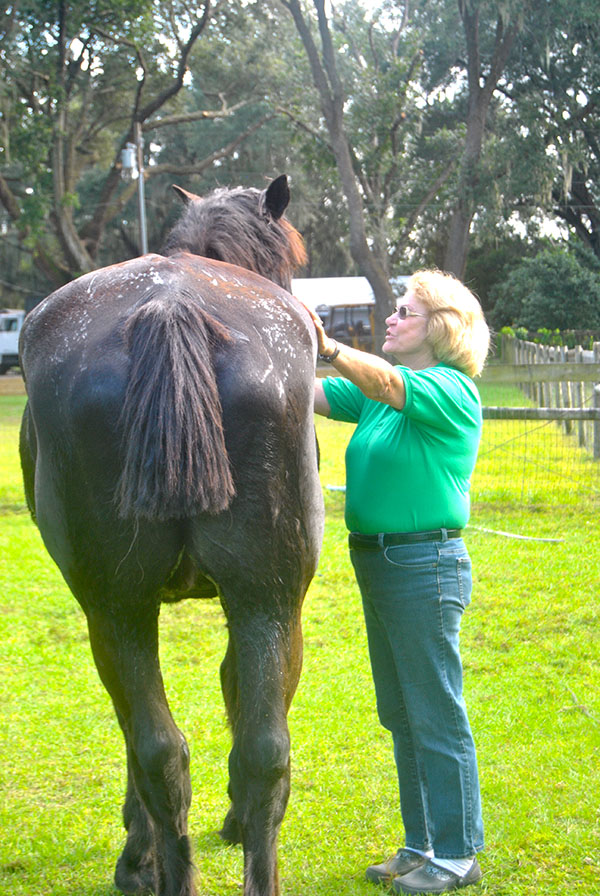 Jen Elliott, program director of Combat Boots to Cowboy Boots, shows off Joey, a Percheron who weighs about 1,600 pounds. She said she always puts the safety of both the horses and veterans at the top of her priorities. “I never want anybody to walk away from here with less than an excellent experience,” she said. 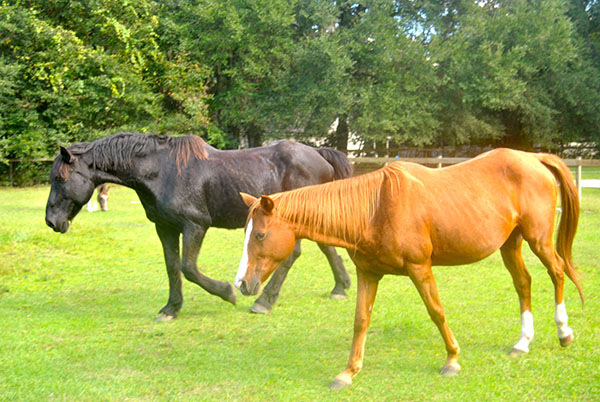 All the horses on Elliott’s farm have been cared for and gentled down after being abused in the past. She got three of them from the Horse Protection Association of Florida and one was born on her property.

Natanya is a reporter who can be contacted by calling 352-392-6397 or emailing news@wuft.org.
Previous With History And Charm, Oldest Bookstores In North Florida Endure
Next On Florida’s Possible Path To Medical Marijuana Legalization