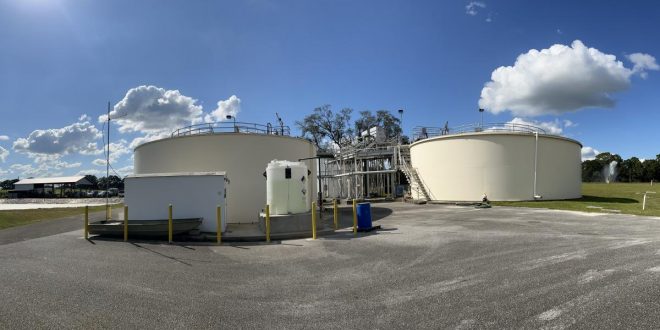 The new facility, which is still in the planning stage, is to be built in the Newberry Environmental Park. (Courtesy City of Newberry)

The City of Newberry is negotiating with the cities of Archer and High Springs about joining onto its planned regional wastewater treatment facility.

The new facility is part of an effort by Newberry to overhaul its wastewater infrastructure to accommodate new development and meet new environmental regulations the state legislature passed several years ago; those will take effect when the city’s current wastewater permit expires in mid-2026.

The new facility, which is still in the planning stage, is to be built in the Newberry Environmental Park, located within city limits on the 92 acres of land along County Road 337 purchased by Newberry last year for $1.1 million. Sewer lines would be run from Newberry to Archer and High Springs if the partnership is finalized. It is expected to last for 40 to 50 years.

Newberry’s existing wastewater facility will be expanded and will continue to operate alongside the new facility, according to Newberry City Manager Mike New.

Rapidly growing Newberry had been planning the project prior to the state’s new regulations, which caused the cost of the project to increase from $25 million to its current estimated cost of $40 million.

Leadership from all three cities has spoken about the initiative for over a year. The city commissions for both Archer and High Springs have passed resolutions affirming interest in the project.

Newberry is currently in talks with Trenton city leaders in Gilchrist County to have them join the initiative as well, but New said Trenton will likely not participate.

Newberry Mayor Jordan Marlowe said building a single facility would be more economically feasible and environmentally friendly than building separate facilities in each of the three cities. Marlowe also put emphasis on how difficult it is for smaller municipalities to afford such a project, which is why it is important for them to band together.

“As with all unfunded mandates, that makes the municipalities that now have to meet that standard scramble around to figure out ‘How in the world are we going to meet that standard?’” Marlowe said. “Luckily for us, we were able to think outside of the box a little bit.”

Marlowe spoke about how he envisioned the concept of the initiative.

“Geographically, this concept makes sense. Newberry is kind of in the center of these other three towns so we can have a spoke,” Marlowe said. “Going out in three directions gives us the opportunity to increase the population base that this would serve, which every time you increase the population base, it means that the resident on the back end will receive a lower cost.”

Archer and High Springs would have to pay their share of construction and operating costs, according to New. Newberry’s current wastewater payment model has residents pay a one-time charge when first joining its system in addition to a subsequent monthly wastewater bill. New plans to have a similar model put in place for Archer and High Springs residents if the cities join onto the facility.

New said support from state lawmakers, including state Sen. Keith Perry and state Reps. Chuck Clemons and Chuck Brannan, in securing funding for the $40 million project has been crucial.

“If we don’t get funding assistance from the government, state and federal level, then it becomes unaffordable for our ratepayers,” New said. “And Sen. Perry, Rep. Clemons and Rep. Brannan all put forth a great deal of effort helping us get funding from the state and federal governments to make our wastewater treatment affordable for our residents.”

Marlowe said while the project is largely targeted toward new development, some existing septic tanks in Newberry will be converted. The city will be looking for clusters of septic tanks that can be converted together. Marlowe plans to obtain a grant from the Suwannee River Water Management District that will allow the city to locate and map those clusters.

“If we can identify clusters of septic tanks where it would be economically feasible to veer off and run sewer to those people, we could try to figure out ways to fund it and hook those folks in to eliminate the septic tanks,” Marlowe said. “Because that is one of our goals, to try to figure out how can we begin to slowly get people onto the city sewer.”

Archer City Manager Charles “Tony” Hammond declined the offer when it was first made but has since decided that joining Newberry’s facility is in Archer’s best interest. New said the facility is critically important to Archer’s continued economic development, especially considering Archer is now entirely reliant on septic tanks.

Hammond has previous experience with a similar project from when he worked for the town of Ahoskie in North Carolina, which supplied wastewater infrastructure for the nearby town of Powellsville. Hammond considers that initiative a success that can be replicated in Alachua County.

Archer is asking for a capacity of about 500,000 gallons per day, according to Hammond. He said he believes that the new facility will be able to support Archer for the next 30 to 40 years.

Hammond said the more urgent concern is the city’s septic tanks are failing and leaking into and contaminating the region’s aquifer.

“We actually are hoping that we can get the lines in between Newberry and Archer laid faster than the facility built because we have enough capacity already existing that we can take some of the pressure off of them right now,” Marlowe said.

High Springs City Commissioner Katherine Weitz, who has a bachelor’s degree in chemistry from the University of South Florida and has extensively worked with groundwater and solid waste in the past, echoed a similar sentiment regarding environmental concerns, saying that improving the region’s wastewater infrastructure is crucial to maintaining the area’s environmental integrity.

“We only have the Florida aquifer here, and that’s where we get our drinking water from, so the potential for negative impact to our drinking water supply here is pretty profound,” Weitz said. “We’ve already seen profound negative impacts to our springs, just from nitrate and fertilizer and human impact. And the time to be thinking about that is not 20 years down the road.”

High Springs currently has a second wastewater treatment facility under construction to support its existing one, which Weitz said needs to be repaired. She said an amendment the city commission passed in October about the development of the city’s Bridlewood subdivision could potentially double the population of High Springs, which would require a wastewater capacity that the two facilities could not meet, leading to further interest in Newberry’s plan.

The regional facility will also support a publicly-owned but privately-operated meat processing plant being built by Alachua County, which is expected to be completed by the end of 2026 and be built in the Newberry Environmental Park along with the wastewater treatment facility.

Meat processing produces a large amount of biowaste, which is why the county sought to construct it near the treatment facility. Marlowe has worked closely with the plant’s main sponsor, Alachua County Commissioner Anna Prizzia, in coordinating the two projects.

The deadline for the wastewater facility, which has not yet begun construction, is the expiration of Newberry’s wastewater permit in mid-2026. New said he believes the facility can be completed as early as late 2025.

Newberry and the involved cities are still discussing the details of the initiative. Neither Archer’s nor High Springs’ elected leaders have committed to joining the project yet.

Silas is a reporter for WUFT News who can be reached by calling 352-392-6397 or emailing news@wuft.org.
Previous The Point, Dec. 20, 2022: After years, Florida adopts new medical marijuana rules
Next Florida gets several rounds of rain this week and a holiday weekend cold blast