Alyne Harris, 79, a painter from Gainesville, has been painting since a young age. She draws inspiration from nature and other favorite subjects such as angels, church scenes, and people in her community. Some of her art is inspired by African American traditions. Her painting routine occurs mostly at night after completing her work earlier in the day.

And now, after decades of creating art, the city of Gainesville will honor her work.

“I just love to paint. I always wanted to be an artist since I was a girl growing up,” Harris said.

In 2019, The Historic Thomas Center received a call from a gentleman saying his brother died and he had several paintings by Harris with interest in selling them to the city. At the time, the center was not formalized as a collecting institution.

After several months, City of Gainesville Cultural Affairs Manager Russell Etling, who manages The Historic Thomas Center, felt it was time to act and purchase the paintings. However, Etling and his team were surprised to find 400 pieces.

Anna Gilroy, curator of the Thomas Center Galleries for the city, had reservations about whether purchasing all 400 pieces would be possible. At the time, the city of Gainesville and The Historic Thomas Center were not collecting institutions by mandate.

Regardless of the setbacks and challenges the purchase brought, Etling felt that the opportunity to purchase Harris’ work was part of the cultural legacy of the city of Gainesville.

Now, Harris will have 200 paintings on display in The Historic Thomas Center and a weekend dedicated to her to sell the additional 200 paintings to the public.

“The 200 pieces that are in display formerly in our galleries will be part of the city’s permanent collection, but as I said, there are 200 more pieces and we are making those pieces available for purchase,” Etling said.

The city paid $7,500 for the paintings, a price that Etling described as “extremely reasonable terms” to be able to acquire Harris’ work.

According to Etling, 200 pieces will be on display in The Historic Thomas Center, which has been the cultural heart of Gainesville for over three decades. The goal is to celebrate the history of Harris’ artistic legacy spanning over four decades.

In 2020, Gilroy had to start preparing for what she and the center would do with all 400 pieces of art that needed to be cleaned and managed.

But the pandemic became a blessing for her, not a curse. It afforded Gilroy and her team more time with each piece and the opportunity to properly manage the entire collection.

“It gave us a space of time, one full year when the gallery was closed and all other business of putting on exhibitions stopped. So, I spent a year with that work,” Gilroy said.

According to Gilroy, the city of Gainesville doesn’t have the capacity, in good faith, to keep custody of all the pieces. But she is excited about the opportunity to sell those remaining paintings to the public.

“People who might’ve known her for many decades or who have collected her work are saying to me that they see it now in a new light,” Gilroy said.

Harris is appreciative of the city’s efforts.

“I am glad that people have respect for me. I try to treat people right, I try to do the right thing about everything,” she said.

Richard is a reporter for WUFT News who can be reached by calling 352-392-6397 or emailing news@wuft.org. Find him on Twitter @RichardMason.
@RichardMason
Previous Gators quarterback Richardson says he gave up free sports car, apologizes in new court-ordered essay for speeding 105 mph
Next The Point, June 17, 2022: Florida isn’t preordering COVID-19 vaccines for young children, though the impact isn’t yet clear 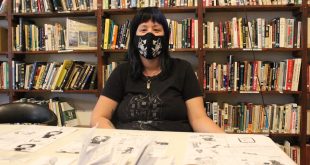