The Gainesville City Commission will vote Thursday on whether or not to authorize the city to sue Gov. Ron DeSantis and State Attorney General Ashley Moody over HB 1.

DeSantis signed “The Combating Violence, Disorder, and Looting and Law Enforcement Protection Act” into law on April 19, calling it the “strongest anti-rioting, pro-law enforcement piece of legislation in the country.”

Critics say it targets Black Americans and protesters who streamed into Florida’s streets following the murder of George Floyd and the killing of Breonna Taylor. The first of multiple lawsuits over the law was filed within days, but Gainesville would be the first city to sue.

Lawyers from Public Rights Project and Community Justice Project, the firms that drafted the complaint and would litigate pro bono on the city’s behalf, said they are in conversation with elected officials in other Florida cities that may join the suit if Gainesville files.

While much of the backlash was to the bill’s crackdown on protesters, section one of the law enables the state to prevent municipalities from reducing law enforcement budgets, something the draft complaint argues is an overreach of state power.

“It’s a complete and total attack on home rule,” said Commissioner Gail Johnson, who proposed the lawsuit to the commission.

The Municipal Home Rule Powers Act was added to Florida’s constitution in 1973. It allows municipalities to enact plans, including budgets, to serve their local population without prior state approval.

Under HB 1, if a municipality reduces their law enforcement budget, and that reduction is challenged by the local state attorney or member of a municipal governing body — potentially even by the county sheriff’s office, pending new rules — the governor’s office can modify the law enforcement items of the budget. That modification is legally binding with no avenue for judicial review.

“This bill actually prevents against local government defunding law enforcement,” DeSantis said when signing the bill into law. “We’ll be able to stop it at the state level.”

The complaint says the city needs flexibility to weather revenue changes and “craft budgets that reflect community values.” It cites historic reductions in law enforcement budgets in Florida cities in response to recessions, malfeasance, and most recently, the pandemic.

The challenge argues HB 1 has inhibited the commission’s budgetary decisions for the upcoming fiscal year, which Johnson said must be finalized in September.

The commission wants to consider transferring youth mentorship programs out of the police budget to another department, or to create a new youth services department —  reflecting the past year’s broader call to separate social and human services from law enforcement.

They are eyeing B.O.L.D. and the Reichert House, which provide services including educational support, mental health counseling and job training to youth but involve “no provision of law enforcement.” The police budget would decrease by the amount of the programs’ funding, but other areas of the budget would not be affected.

Johnson said under the police department, any expansion of those programs would have to come out of the city budget. If they were housed in another department, she said, they could be eligible for grant opportunities and may function better.

Christina Pushaw, DeSantis’ press secretary, said “defunding the police” is a dangerous policy, and pointed to local governments across the country who lowered police budgets over the past year only to propose budget increases after a rise in crime.

“Governor DeSantis wants to ensure that this type of reckless experimentation, which harms disadvantaged communities the most, doesn’t happen in Florida,” Pushaw said. “That’s why he signed the law with this provision in it.”

The budget changes Gainesville city commissioners would like to consider are not necessarily the same as the cuts in places like Minneapolis and Baltimore.

Activists have used the phrase “defund the police” in varying ways. It is a distinct movement from a push to abolish the police and doesn’t always refer to shrinking the size of the police force. It reasons that police are poorly equipped for but often tasked with responding to issues like mental health and homelessness, while advocating for reducing police budgets and instead investing those funds into separate social services.

Johnson said “defunding the police” is not the language she’d use for this reorganization of youth services, which she said has been an ongoing conversation since before last year.

Thousands of Gainesville residents peacefully demonstrated desire for these changes last year, according to the complaint, but lack of clarity in HB 1 around what reductions could trigger state review of the budget and how the state would use that authority has deterred the commission from freely considering them.

The inability to respond to the voiced interests of the local population is at the heart of the legal challenge, which argues HB 1 violates the state constitution in five ways:

The aim of the lawsuit is to prohibit the enactment of the municipal budgeting component of HB 1. Public Rights Project attorney LiJia Gong said the court could respond instead by explicating the law to make it more likely to survive, but even that would be helpful to cities.

Right now, HB 1 does not specify what dollar amount or type of reduction could trigger the review process or specify any ground rules for the state’s review process.

“Any more guidance and clarity on how this appeal process would work would also be helpful for the city [of Gainesville] and for other cities,” Gong said.

Moody’s office declined to comment due to ongoing litigation over HB 1.

“I believe that it’s incumbent upon us to lead the way,” City Commissioner Gail Johnson said.

Johnson described leading a challenge on behalf of Florida’s cities as a moral imperative.

“I believe that it’s incumbent upon us to lead the way,” she said.

In addition to commissioners from Tallahassee and St. Petersburg, Community Rights Project attorney Berbeth Foster said they’ve been speaking with city commissioners in Broward County who had been reconsidering their contracts with the county sheriff’s office but feel unable to do so because under pending changes to HB 1, the sheriff’s office itself could challenge their decision.

When the suit was first proposed at the commission’s May 20 meeting, Gainesville City Attorney Nicolle Shalley said she didn’t recommend suing at this time, but rather waiting for HB 1 to cause a more concrete violation and give the city firmer grounds to sue.

She is expected to give her opinion of the draft complaint at the Aug. 5 meeting before the commission votes. She declined through a city spokesperson to comment for this story.

“We’re seeing states attacking kind of the most core local powers,” Gong said. “Because how a city spends its budget really does not impact the entire state.”

The Local Solutions Support Center, a team including the Public Rights Project that fights abuse of state preemption, issued a report Tuesday on 2021 legislative sessions nationally. It identifies over 400 preemption bills filed nationwide – more than twice the number they found from the last full year of session. More than 70 of those came from Florida and Texas.

The preemption bills in Florida included bans on trans athletes, mask mandates and critical race theory, as well as bills preventing Gainesville and other cities from pursuing 100% clean energy.

Gong said by suppressing the ability of residents in majority minority cities to make changes at a local level when they’re being governed by a majority white state legislature, “state preemption is one of the key tools of upholding white supremacy.” The report said the South’s history of using preemption to stall racial equity stretches back to the post-Reconstruction era.

Earlier this month, protesters against the Cuban government blocked streets in Orlando, Tampa and Southwest Florida but few arrests were made under HB 1. DeSantis said these demonstrations were “much different situations” than those that followed the murder of George Floyd. Most registered Cuban American voters identify as Republican, while Black Americans tend to vote Democrat.

HB 1 is one of at least four laws to emerge from Florida’s last legislative session — on topics ranging from trans athletes to tech companies and voting — that have inspired litigation.

Whether the city of Gainesville will join in that response will be determined Thursday at the 1 p.m. commission meeting.

Katie Hyson is a Report for America Corps Member at WUFT News covering racial and rural inequities in East Gainesville and north central Florida. She can be reached by calling 352-392-6397 or emailing news@wuft.org. Click here to learn how you can support her reporting.
Previous The Point, Aug. 2, 2021: Florida’s Record-Breaking Weekend Of COVID-19 Cases And Hospitalizations
Next The Point, Aug. 3, 2021: Gainesville Commissioners To Discuss Suing State Over ‘Anti-Riot’ Law 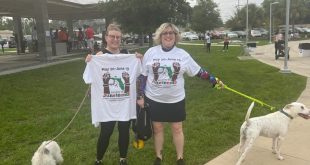