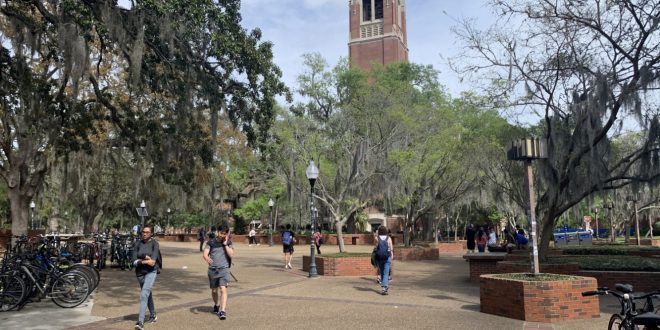 Out-of-state students could attend the University of Florida and other state schools with a tuition waiver if their grandparents are full-time residents and their standardized test scores meet certain thresholds. (WUFT News file photo)

Next year, out-of-state college students could be eligible to attend Florida’s public universities at the same cost as in-state residents – if they have a grandparent living in the state.

The legislation, which Gov. Ron DeSantis signed into law June 29, allows Florida to waive out-of-state fees for as many as 350 students each academic year – saving tens of thousands of dollars for each family over four years.

The Florida Board of Governors will finalize the rule during its Aug. 30 and Sept. 1 board meeting, said spokesperson Renee Fargason. The draft regulation says the State University System’s chancellor will decide how many waivers each university can grant out of the 350 available.

The waivers will likely be offered on a first-come-first-serve basis, and to be eligible, students’ SAT scores must be no lower than the 89th national percentile. Or, they must obtain a comparable score on the ACT. Florida said it couldn’t determine how much the program might cost the state budget because it was unclear how many students would be eligible.

Republican Rep. Patt Maney of Fort Walton Beach said the testing requirement – and the bill at large –  were intended to attract bright college students to the state’s university system, and eventually, the workforce.

Florida has a significant number of retirees and grandparents living in the state: 21% of its population – about 4.5 million people – are over the age of 65, which is the second-highest percentage in the country behind Maine, according to 2019 census data.

“We were trying to use grandparents as a magnet to attract otherwise outstanding students who might not be able to come here and pay out-of-state tuition,” he said.

The fee waiver is applicable for up to 110% of the credit hours required for the enrolled student’s degree.

Maney previously proposed the out-of-state fee waiver as a standalone bill, but it failed. It was later rolled into a larger bill, which passed and went into effect July 1 and included other provisions. Notably, the law also protects universities from being held civilly liable for actions taken during the COVID-19 pandemic, such as forcing students to take classes online, despite paying regular tuition.

The Florida Senate passed the bill unanimously, and the House’s second, final vote was nearly unanimous – 102 representatives voted yes, and 11 voted no.

Maney said funds for the grandparent waiver will come from the state’s Benacquisto Scholarship Program, which similarly offers in-state tuition for out-of-state students. The Benacquisto Scholarship is reserved for National Merit Scholars, a select number of students who perform exceptionally well on the Preliminary SAT, the national merit scholarship qualifying test.

Jeff Newby of The Villages is excited about the law. His eldest grandchild, 17-year-old Alexander Ketzle of Virginia, is considering applying to UF’s aerospace engineering program. If Ketzle were to obtain one of the handful of out-of-state tuition waivers, the savings could be significant.

At the University of Florida, non-resident undergraduates are expected to pay an additional $28,278 in tuition during the 2021-2022 academic year – more than double the cost for in-state students living on campus, according to UF’s Office of Student Financial Aid and Scholarships. After four years, fees for out-of-state students could exceed $100,000.

At Florida State University, out-of-state students are expected to pay an additional $14,000 compared to Florida residents during the upcoming academic year.

“I think that it’s fair,” Newby said. “Let’s face it, the grandparents are still paying taxes and are still supporting the state.”

Newby said the law solidified his family’s desire to have Alexander attend college in Florida, and with The Villages being only an hour away from Gainesville, he said he’s planning to visit Alexander often.

“He could even come here and do his laundry.”

Thomas is a reporter for WUFT News who can be reached by calling 352-392-6397 or emailing news@wuft.org.
Previous Buchholz Math Team Wins 13th National Championship
Next Expect A Traffic Shift Next Week On U.S. 441 Through Paynes Prairie