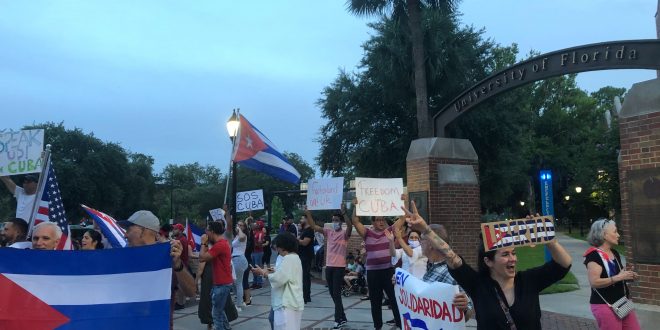 Protesters wave flags and signs on the corner of University Avenue and 13th Street in Gainesville, showing support for protests in Cuba against its authoritarian government. (Alexander Lugo/WUFT News)

In a crowd of over 50 people chanting and waving Cuban flags, a protester proudly told their grandmother to listen to the crowd calling for the liberation of her homeland, Cuba.

The protesters met at the corner of University Avenue and 13th Street Wednesday evening where they stayed to support large demonstrations that erupted in Cuba over the weekend calling for a more just government. The protest was the second to take place in Gainesville and will be followed by a third one July 28. Protests are rare in Cuba due to the fear citizens have of their authoritarian government. However, a hit to its economy last year led to severe food scarcity intensifying frustration among citizens.

Although Cuba has also faced detrimental economic conditions and a heavy-handed authoritarian government for decades, Franco Morell, a 19-year-old Santa Fe nursing freshman, said that oppression may not be the main reason for the uprising.

“The thing that’s moving them is the hunger,” Morell said. “As we’ve seen in many countries, what moves the people is when they realize, ‘Hey, we don’t have food, we’re hungry, we’re gonna die.’”

Morell moved to the U.S. from Cuba when he was 13, and he said he’s glad to live in a country that affords him things like freedom of speech and the right to bear arms.

Salsa music and car horns were often drowned out by chants calling for “libertad,” which is Spanish for liberty.

Freedom House, a non-profit dedicated to research on democracy, ranked Cuba as the 24th lowest ranked country in terms of freedom in 2020. According to its report, the Cuban government used the COVID-19 pandemic to justify cracking down on rising opposition last year.

Anyone who stands up to the government will be punished, said Lydia Woloszyn, who drove an hour to join the protests.

“They’re dragging their children out of the houses, 15- and 16-year-olds, so that they could go to the military,” Woloszyn said.

She wants to see the U.S. put more effort into intervening in Cuba.

So far, U.S. politicians on both sides have expressed support for the protests. President Joe Biden said the U.S. stands with the protesters and Gov. Ron DeSantis said he wants to ensure the island has internet access.

The U.S. has intervened in the form of sanctions against Cuba for decades. Organizations like the United Nations call for an end to the sanctions because they believe it contributes to the country’s declining economy. Cuban authorities say the island lost $9 billion in the past year due to U.S. sanctions. However, U.S. authorities argue that sanctions are a way to pressure the government to instill more freedom, and cited its constant supply of humanitarian relief to the island.

Woloszyn said she is wary of sending aid because the Cuban government tends to resell that same aid to the citizens it was intended for.

Miami Mayor Francis Suarez told Fox News the U.S. should contemplate intervening with military action, including air strikes. Some protesters also felt that some form of military intervention should be considered by the U.S.

“Right now, we’re asking [the U.S.] to intervene in a humanitarian form but also as military force,” Orlando Alvarez, who fled Cuba after a large exodus took place in 1994, said.

Alvarez wants to see American ships off the coast of Cuba provide medical resources and military presence. The presence of both would help Cuban protesters feel safe enough to continue protesting and ultimately force Cuban President Miguel Díaz-Canel and other government officials to resign, he said.

“He’s shutting down communications, he’s restricting the human rights of his own population,” Alvarez said. “He’s actually committing acts of war against a disarmed population.”

The government is holding the families of Cuban Americans as ransom, Alvarez said, because those family members are the ones injecting money into Cuba when they send their families money for survival.

“I made a decision that I won’t have my kids in Cuba under that Communist regime,” Alvarez, whose three kids were born in the U.S., said. “I mean, I love Cuba, but not for my kids.”

Alexander is a reporter for WUFT News who can be reached by calling 352-392-6397 or emailing news@wuft.org.
Previous Florida Education Board Approves New School Standards
Next Alachua County Commissioners Give Final Approval To Celebration Pointe Sports Complex