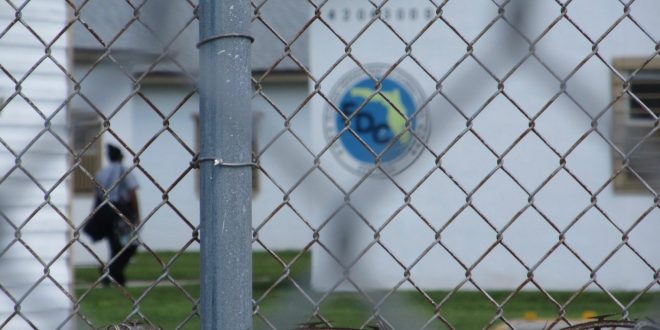 A corrections officer walks beyond the chain link gate at Martin Correctional Institution in Indiantown, north of West Palm Beach. Inmates here and across the state said they followed the general election closely from behind bars. (Hannah Phillips/Fresh Take Florida)

The days following the election were tense, one inmate said. Like waiting for a child to be born.

By Friday, Alexander Clayton’s nerves were frayed. He forfeited his own right to vote in 2007, when he was found guilty of murdering his 20-year-old girlfriend. Imprisoned and quarantined in Avon Park Correctional Institute east of Tampa, he could only guess at how those outside had chosen to vote.

The news came Saturday afternoon. President Donald Trump won more votes in Florida, but former Vice President Joe Biden earned enough electoral votes elsewhere to win the presidency. From Miami to the Panhandle, cars honked, and people yelled. On the inside, Clayton and his cellmates let out their collective breath.

“There were no celebrations or riots like what one may have witnessed in the free world,” he wrote in an email. “The spectre of retaliation by the guards hung over everything.”

Clayton, 45, and other inmates across the state said in interviews that they have followed the general election closely from behind bars.

Their eyes are on Biden, who as a U.S. senator largely wrote and pushed through Congress the 1994 crime bill, which established tougher prison sentences for federal crimes and more aggressive policing. As a presidential candidate, Biden has pledged to reduce the number of people in prison and eliminate what he called racial, gender, and income-based disparities in America’s justice system.

“A lot of us are here because of what he did,” said Weyman Bowers, 55, who is serving a 15-year sentence at Marion Correctional Institution in Ocala because of theft, burglary and assault offenses. “His supporters believe he’s going to fix his mistake, but only time will tell.”

The vice president-elect, Kamala Harris, who will become the nation’s first Black, female vice president, was a former top law enforcement official as a district attorney in San Francisco and later as California’s attorney general. She worked with counties there to develop alternatives to incarceration but has a mixed record on investigating police shootings.

Torris Brooks, 44, is one of Biden’s supporters. The state considers him a habitual violent offender because of theft and robbery felonies he committed between 1993 and 1995 – crimes for which he was on probation in 2001, when he tried to rob a plane. Now, he’s in prison for life without chance of parole.

He and other inmates at the Gulf Correctional Institution west of Tallahassee spent the election week glued to the news. Each night’s newscast came punctuated with the occasional whoop or groan.

A groan, and Trump wins Florida. A whoop, and Biden takes Michigan, then Pennsylvania.

“This is going to be a big improvement from our current administration,” said Brooks, who is Black. “We’re in desperate need of prison reform. With Trump, it seems like our issues fall on deaf ears.”

Inmates are largely unified by their desire for prison reform, said Jackie Bush II, 28, at the Jefferson Correctional Institution in Monticello, east of Tallahassee. Corrections officers have competing priorities.

“They’re more interested in the presidential candidates’ views on taxes, COVID-19 and finances, because that’s what they deal with on a daily basis,” he said. “We just want to get back to our families safer and sooner.”

Bush is nearing the end of a 3-year-sentence for traveling to meet a minor for sex, and one of many who cited an ideological divide between themselves and officers.

“They announced Biden won, and about 10 people cheered and rubbed it into the guards, who are mostly white,” said Sam Bailey, 52, who is white and serving time for felony drunken driving and burglary at Lancaster Work Camp in Trenton, west of Gainesville. “It seems like it’s more about race in here than politics.”

The labor union that represents state prison correctional officers endorsed Trump over the summer, and officials in his campaign point to the First Step Act, a bipartisan bill passed in 2018, as a recent example of Trump’s criminal justice policy reform. While the law works to shorten federal prison sentences, it doesn’t affect the sentences of those housed in county or state prisons. County and state facilities are where the vast majority of inmates are held.

Biden has promised to launch a $20 billion grant program that will encourage states to reduce their inmate population at the local level. While other states have reduced incarceration rates, Florida’s remains among the highest in the U.S.

Denise Rock, executive director of the prison advocacy group Florida Cares Charity Corp., said she thinks the grant program may be just the incentive Florida needs. “You know how money hungry our Florida is,” she said.

Biden’s victory brought brief moments of levity to people in correctional facilities across the state. In Arcadia, north of Fort Myers, inmates in one Desoto Annex dorm cheered and clapped, and grew louder with each state called for Biden. Samuel Asbell, 50, watched in tears as Harris gave her speech. He is serving a 38-year prison sentence for robbery.

In Gadsden Correctional Facility in Quincy, northwest of Tallahassee, a cellblock of 70 women transformed momentarily into a dance party.

“It seemed like the club in here for a few minutes,” said Stephany Baisden, 35.

There were sober moments, too. The dancing stopped, and Baisden remembered where she was: in prison and under even stricter lockdown because of the pandemic.

“I am afraid now that Biden has won, he’ll keep us locked down longer,” she said. “We get 30 minutes outside a day if we’re lucky. That’s definitely not something I wish to continue.”

Baisden was sentenced to prison in May on drug charges. She expects to be released next October.

In other institutions, the election went by almost unnoticed. Coy Wyche, 70, from the Union Correctional Institution in Raiford, southwest of Jacksonville, said it meant very little to him and his peers. Built in 1913, Union is the oldest operating prison in Florida. Many of its male inmates are waiting out death sentences.

“People here say they aren’t doing nothing for us,” Wyche said. “Why should we care who wins or loses?”

No one’s given him a good answer. Wyche was found guilty of first-degree murder in 1994.

This story was produced by Fresh Take Florida, a news service of the University of Florida College of Journalism and Communications. The reporter can be reached at hphillips@freshtakeflorida.com

Hannah is a reporter for WUFT News who can be reached by calling 352-392-6397 or emailing news@wuft.org.
Previous Florida Governor Pushes ‘Anti-Mob” Proposal In Response To Protests
Next Tropical Storm Eta A Reminder Of The Potential For Late-Season Hurricanes In Florida