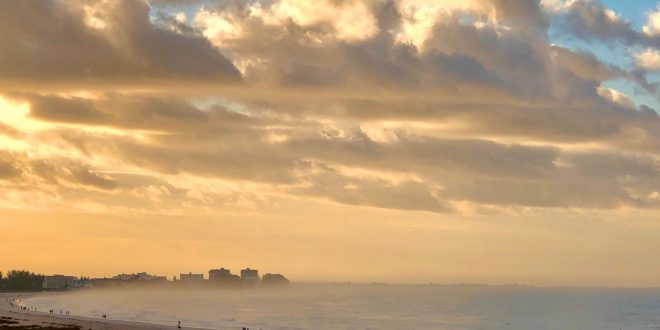 Pinellas County, home to beautiful sandy beaches like this one at Treasure Island, was one of only 12 counties among Florida’s 67 that Biden carried, and his margin there was smaller than any other – reflecting the nail-biter election that Friday entered its fourth day of counting votes without a clear winner. (Ethan Magoc/WUFT News)

With the presidential election hanging in the balance, Pinellas County along Florida’s west coast waited Friday to see whether its political winning streak continues.

Voters there have selected the winning presidential candidate every election since 1980, except for the contested 2000 race, when a 36-day recount fight awarded the White House to George W. Bush.

This year, the so-called “hinge” county voted for Vice President Joe Biden – narrowly, by two-tenths of 1% – even though President Donald Trump won Florida overall by 3.4 percent of the vote. Biden was on the verge of the presidency Friday with votes still being counted in a handful of battleground states.

What’s so special and prescient about voters there?

“What it boils down to is Pinellas County is kind of a microcosm of America,” said Al Ruechel, a retired local television news anchor there. “We tend to mirror what the popular vote tends to be.”

Pinellas is on the central Gulf coast, home to cities that include Clearwater and St. Petersburg. The county is one of the smallest in Florida but among the most densely populated with nearly 1 million residents. It includes around four colleges or universities and 35 miles of beaches.

The county is more white, less Hispanic and more highly educated than Florida overall, according to Census figures.

“You get New Yorkers, you get Coloradans, you get Iowans,” he said. “They all tend to mix right here and bring their political views.”

As more young adults gravitated to the area, the once solidly Republican retirement area became more liberal-minded, said Susan MacManus, a former political science professor at the University of South Florida there.

Pinellas was one of only 12 counties among Florida’s 67 that Biden carried, and his margin there was smaller than any other – reflecting the nail-biter election that Friday entered its fourth day of counting votes without a clear winner.

Four years ago, the county voted for Trump by 1.1 percent of the votes – closely tracking Trump’s margin of victory statewide.

“They’re in one of those weird situations where the streak will possibly be kept alive if Biden ultimately wins,” MacManus said.

This election was only the second that Pinellas didn’t vote for the candidate who ultimately won the state, said Darryl Paulson, a former political science professor at USF who specializes in Florida and national elections. The other was in 2000 when Al Gore carried Pinellas 50-46 percent.

In 2016, Pinellas was one of the only four Florida counties to switch its vote from Democrats in 2012 to Trump in 2016. Turnout in Pinellas this year was nearly 79%, slightly higher than statewide totals.

“That’s very unique to constantly sort of have your finger on the pulse of the public,” he said.

This story was produced by Fresh Take Florida, a news service of the University of Florida College of Journalism and Communications. The reporter can be reached at mlyden@freshtakeflorida.com.

Meleah is a reporter for WUFT News who can be reached by calling 352-392-6397 or emailing news@wuft.org.
Previous Soaring Ticket Sales Keep Oaks Mall Carnival In The Game
Next Nov. 6, 2020: Afternoon News In 90