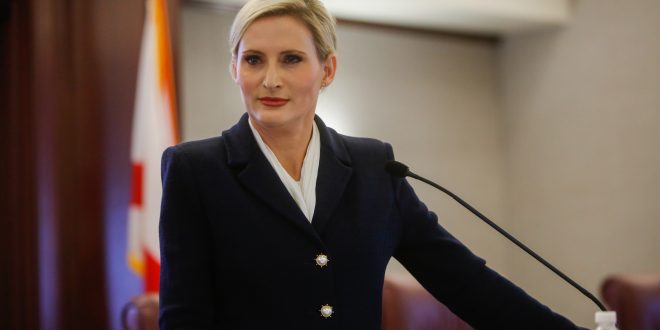 TALLAHASSEE — With millions of votes already cast in the November general election, Secretary of State Laurel Lee late Tuesday asked the Florida Supreme Court to reject a last-minute attempt to kill a proposed constitutional amendment that would overhaul the state’s primary-election system.

Lee’s attorneys, in a 15-page document, blasted an emergency petition filed last week that seeks to block the proposed amendment, known as Amendment 3. The petition was filed on behalf of Glenton Gilzean Jr., CEO of the Central Florida Urban League, who, along with other opponents, contends the proposed changes in the primary system could make it harder to elect Black candidates.

Lee’s attorneys said the state doesn’t take a position on the merits of the arguments raised in the petition — but that they should have been raised months ago, instead of after voting had already started. The attorneys wrote that the petition is “tardy, procedurally deficient, and, if granted, would cause nothing but electoral confusion in perhaps the most important state this election cycle.”

“Mr. Gilzean’s petition is speckled with enough flaws to warrant its denial without reaching the substance,” the document said. “Mr. Gilzean was dilatory in bringing this petition, he has no clear legal right to force state elections officials to ignore mandatory duties, he has other remedies available, his requested relief would only add to the substantial headwinds this election season, and his petition is based on untested facts submitted directly to a non-fact finding court.”

Amendment 3, if passed Nov. 3, would allow voters to cast ballots in primary elections regardless of party affiliation. The two candidates getting the most votes in each primary would advance to the general election.

The state Republican and Democratic parties have fought the amendment, including arguing at the Supreme Court late last year that the measure should not be allowed to go before voters. The Supreme Court, which reviews the wording of ballot measures to make sure they meet legal standards such as not being misleading, voted 4-1 in March to allow the amendment to go on the November ballot.

Gilzean’s petition, filed Oct. 13, asked the Supreme Court to direct Lee to “ensure the ballots for proposed Amendment 3 are not canvassed and/or reported to her office” or, as an alternative, to direct the state Elections Canvassing Commission not to certify the results of voting on the amendment. The petition was filed on the same day that incoming House Speaker Chris Sprowls, R-Palm Harbor, and state Sen. Janet Cruz, D-Tampa, held a press call to highlight arguments that revamping the primary-election process could make it harder to elect minority candidates.

The petition pointed to studies that have emerged since the Supreme Court’s March decision to allow the amendment to appear on the ballot.

All Voters Vote, a political committee that has spearheaded the Amendment 3 drive, argued that Gilzean’s petition and the studies are based on flawed data. The committee also filed a friend-of-the-court brief late Tuesday that assailed the attempt to block the amendment in the midst of voting, describing the petition as a “thinly cloaked political stunt” backed by the political parties.

“Voters, not courts, should decide elections,” the All Voters Vote brief said. “As the (Supreme) Court reads this, millions of Floridians will have already cast their ballots with mere days remaining until voting ends on Election Day. Petitioner asks this court to wrest the decision on Amendment 3 from the electorate and, instead, supplant the court’s will for that of millions of voters. The petition invites the most suspect form of judicial activism: stopping votes from being counted while ballots are still being cast.”

As of Wednesday morning, more than 3.6 million ballots had been cast by mail or at early-voting sites. Lee’s attorneys in the document filed late Tuesday argued that Gilzean’s petition provided “no justification for failing to bring the studies to this court’s attention three months ago, or one month ago — literally any time before Floridians began casting the ballots he now asks that this court negate.”

“The prejudice to the state, in turn, is self-evident. The 2020 General Election is underway with voting concluding — not beginning — in early November,” Lee’s attorneys wrote in arguing against the petition. “Across the state, elections officials have enlisted platoons of individuals to ensure that, during a year presenting unique challenges, Floridians have the opportunity to cast their ballots safely and effectively. Millions of ballots have been cast and canvassed. The stakes are at their apex, and the room for error is at its nadir.”

Jim Saunders is a reporter for the News Service of Florida, a wire service to which WUFT News subscribes.
Previous Oct. 21, 2020: Morning News In 90
Next Hernando Sheriff: Deputy Shot Man Who Pointed Rifle During Standoff

A long-debated proposal that would allow people with concealed-weapons licenses to carry guns on Florida college and university campuses was filed Monday for consideration during the 2021 legislative session.