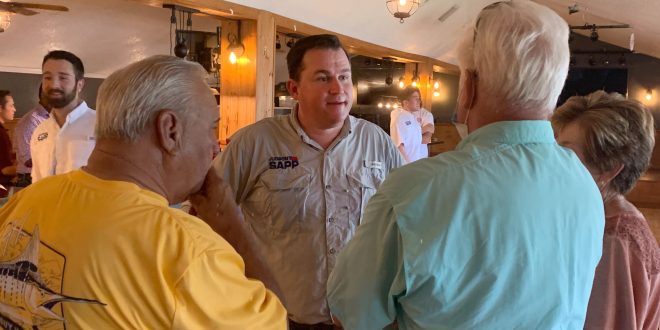 LAKE BUTLER, Fla. – A leading Republican congressional candidate is taunting the University of Florida for its decision to ban its “Gator Bait” cheer over what the school said were racist origins of the phrase.

“There’s a certain amount of irony that the guy who did not go to UF is the only one being extremely vocal about the fact that you should be able to say this,” Sapp said in an interview Tuesday during a campaign stop in Lake Butler, north of Gainesville. “It’s your freedom of speech.”

Sapp, who has raised more money than any of the 16 other candidates in the congressional race, said he plans to wear a “Gator Bait” shirt or pin the next time he attends a Florida sporting event. He called University President Kent Fuchs’ decision to discontinue the cheer a mistake.

“I’d love for the university president to kick me out if he wants to kick out a sitting member of Congress,” he said. “He’s welcome to.”

Other Republicans in the race also have criticized Florida’s decision. Another top candidate, James St. George, a physician from Fleming Island, said on Facebook that banning the cheer was “disgusting” and called it an example of political correctness.

The fight has turned what the school said was intended as a gesture to address racism into a campaign platform pushing back against what candidates say are left-leaning politics.

The conflict illustrates how racial issues – stoked by police shootings and abuses, President Donald Trump’s responses and Black Lives Matter protests – may play out during elections in 2020, especially in majority-white and largely rural congressional districts. Sapp, St. George and a third top Republican candidate, Kat Cammack, have closely aligned their campaigns with Trump. Democrats have not been competitive since 2010 in the district in North Central Florida.

Sapp’s campaign made stacks of his “Gator Bait!” campaign signs available during his visit this week to Lake Butler, which included a buffet-style dinner where few people wore masks, despite surging numbers of coronavirus cases the past two weeks across Florida. Sapp’s supporters have posted photos of the signs in their yards, including one showing a fish stabbed with a knife.

In a recorded phone message to potential voters, Sapp barks, “Gator Bait!” and describes himself as a candidate who won’t be bullied by liberals.

“Sorry for leading with that, but that’s how I feel right now,” Sapp said in the message. A recording was provided to Fresh Take Florida, a news service operated by the University of Florida’s College of Journalism & Communications.

St. George did not respond to six days of calls and messages sent to his personal phone, campaign email and Facebook.

Cammack has not made a position on the UF cheer a centerpiece of her campaign.

The university announced June 18 that its athletic department and band would no longer use the traditional “Gator Bait” cheer directed at opposing players. Fuchs said the phrase has “horrific historic racist imagery,” and others said it was tied to accounts of using Black children to hunt alligators in swamps during the 19th and early 20th centuries.

The decision and subsequent political uproar put the chairman of the university’s board of trustees in an awkward position. Mori Hosseini, one of Florida’s largest residential developers, contributed at least $88,200 to Republicans in federal elections, including $5,600 in December directly to Sapp’s congressional campaign.

Hosseini said in a statement earlier this month that he promised to improve diversity at UF.

“I commit to you today that we will press forward in diversifying our faculty, our student body and our staff,” he wrote. “We will make it a priority to ensure we are briefed regularly on where we are making progress and where we are not.”

The history of the phrase extends to unverified reports of Black children used to lure alligators during hunts, which was popularized on postcard images during the late 19th and early 20th centuries, said Paul Ortiz, a University of Florida history professor.

Ortiz said he used to show images of the postcards in his classes, but it was so upsetting that some students wept.

Ortiz, a registered Democrat, said he prefers congressional candidates would focus on issues like health care, education and the economy, not preserving the “Gator Bait” cheer.

Another Republican in the race, Gavin Rollins – who was inducted into UF’s 2011 Hall of Fame and is a high school U.S. history teacher– also criticized the school’s ban of the cheer. In a Facebook post, he said he was the only UF alumnus in the Republican primary and promised to continue to use the “Gator Bait” cheer at games.

In an interview, Rollins acknowledged the historical racism attached to the phrase but said he has not heard anyone who was offended by the chant, which was popularized by former Black UF football player Lawrence Wright.

“All it does is create controversy unnecessarily and focuses the effort on something that isn’t a problem,” he said. “It avoids the discussions on real problems that actually deserve solutions.”

Rollins, a Clay County commissioner, trails four opponents in campaign contributions but was endorsed by the son of incumbent Rep. Ted Yoho.

This story was produced by Fresh Take Florida, a news service of the University of Florida College of Journalism and Communications. The reporter can be reached at lruiz@freshtakeflorida.com

Lina is a reporter for WUFT News who can be reached by calling 352-392-6397 or emailing news@wuft.org.
Previous Florida 8th Circuit State Attorney Candidate Blocked From The 2020 Ballot
Next Pending Hearing, US Appeals Court Blocks Judge’s Ruling Allowing Felons to Vote in Florida