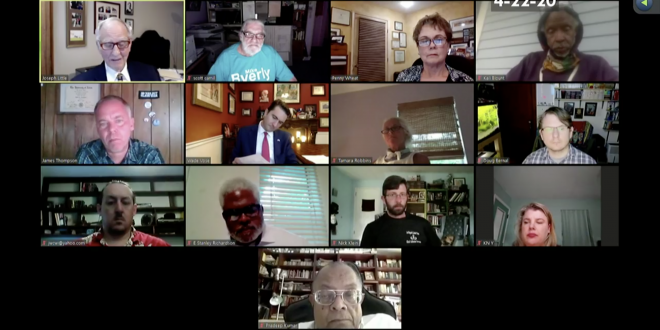 Nine proposals remain for amending the Alachua County charter after a review panel finished reviewing all but one of 80 submitted as part of the once-a-decade process.

The Alachua County Charter Review Commission during two recent virtual meetings to advance just one of the final 22 it needed to discuss. The 12-member panel also eliminated three of 11 other amendments it had pushed forward during meetings held earlier this year.

The latest proposal – submitted by panel member Kali Blount and calling on the county commission to examine all governmental and managerial policies within county departments for suspicions of racial, economic and gender bias – passed by an 8-4 vote.

Blount said he hoped such an amendment would spur the county commission, its departmental staff and the public to “test for such problems and arrive at solutions to re-engineer policies.”

Joe Little, the review commission’s vice chairman, was among those who voted against it. Little said changing the charter as Blount urged was not a proper way to protect against discrimination.

“It begins to try to look inside people’s minds and souls in a manner that’s probably inappropriate for the government to do,”  Little said.

The panel is set to meet again virtually Wednesday. It is then expected to hold three public hearings on the advanced proposals between May and June.

The county commission every 10 years appoints a charter review panel to solicit and evaluate proposals for amending the county’s governing document. Most of the proposals submitted involve district representation, accountability and transparency, land use and the environment.

No amendment should conflict with the U.S. Constitution or affect the county’s budget, existing debt obligations, comprehensive plan or any land zoning stipulations. They also must avoid usurping the county commission’s authority or involve matters more appropriate for ordinances.

Some viewers who watched the meetings were furious at the lack of COVID-19 discussion, but the panel underscored its mission as having no relationship to the pandemic.

The only COVID-19 proposal formally submitted was emailed in March by a resident requesting that a barbershop in Gainesville be considered as an essential service so it could remain open. That idea was quickly rejected.

Just one resident seized the opportunity to speak during the time allotted for public comment. Matthew Hurst unsuccessfully pushed his proposal to make internet access to public records automatic.

“I think it is very crucial to the functioning of our government that people can get records online especially in times like these,” Hurst said.

The panel also voted 7-4 to eliminate three proposals it had advanced in January and February.

One called for creating an inspector general’s office to serve as an independent watchdog on behalf of county residents. The review commission’s chairwoman, Penny Wheat, had proposed the idea but voted against it.

Another proposal eliminated would have further protected nature preserves, waterways and critical wildlife in the county, and granted residents the right to sue to protect them. The third proposal no longer being considered would have given the Santa Fe River its own bill of rights.

Michael Hill, the county resident who recommended the amendment, said afterward he was “very upset” that the review panel had rejected it.

“I got several calls from the committee telling me that they really liked the amendment and that they worked on it,” Hill said.

Calling it “a personally painful decision,” Wheat said the panel had no choice.

Wheat has said many of the proposals eliminated by the review panel would be sent to the county commission as well as local organizations for possible consideration.

All but two of the remaining proposals have been legally vetted, she said.

One would require the county manager to appoint all county department heads, with the county commission voting whether to confirm the appointments. The other states that all urban land and real estate developers must donate 25% of what they create to public housing or wild spaces.

The review panel is awaiting an update from its attorney about those ideas, Wheat said.

Noah is a reporter for WUFT News who can be reached by calling 352-392-6397 or emailing news@wuft.org.
Previous Gainesville City Commission Passes $3.2M Coronavirus Relief Package For Households and Businesses
Next Coronavirus Evening Update: Trump Meets With Gov. DeSantis As State Readies Reopening Plan