In a time of pandemic, social distancing and lockdowns, a charity’s decision to go ahead with a routine food giveaway in Gainesville caused more of a commotion than the organizers had bargained for, with people camping out overnight and traffic causing gridlock in surrounding streets.

Hundreds gathered Wednesday morning for Farm Share’s collaborative event with the Alachua County Christian Pastors Association, and the food ran out well before the planned end-time.

Farm Share, an organization that distributes food to families in need, sent a truck of fruits, vegetables, canned goods and nonperishables, according to event coordinator and local pastor Gerard Dunkin.

Commuters traveled from other counties into Gainesville and flooded Waldo Road with traffic. It was supposed to start at 9 a.m., but Gainesville police let people enter the lot and park as early as 4 a.m., Dunkin said.

Although the giveaway was supposed to be limited to Gainesville residents, Dunkin said it was hard to turn people away.

“We understand the time we are in now,” he said. “I was not in the position to limit anybody from anywhere.”

Lt. Audrey Mazzuka of Gainesville Police Department said she received a call at 6:47 a.m. from another lieutenant, who said the parking lot was completely packed with people waiting in their vehicles.

Dunkin said around 7 a.m., 400 to 500 cars spilled out from the lot and clogged streets. He said the police called and urged him to “speed things up” due to traffic concerns.

Dunkin said each person was allowed one box of food, which was distributed by volunteers from area churches, who wore gloves and masks.

“The drivers knew to flash their lights and pop their trunks,” said Dunkin. “Then the volunteers put the food in their trunks.”

Avis Williams, 44, of Levy County said she drove an hour in hopes of obtaining food for her parents, who live in Alachua County.

“My mother is 80 and my father is 75…and he just had spinal surgery, so they really can’t go out anywhere,” Williams said. “For me, it was a blessing because I was able to get food for them before it all ran out.”

“It seemed like they still had food left for the people behind me,” she said.

However, Alachua County posted “the Farm Share food give-away at the MLK center is now closed and the food has all been distributed” at 9:37 a.m.

Dunkin said he received concerned phone calls from people who showed up on time or earlier and still weren’t able to leave with any food.

However, Dunkin said he had to make the call to start early because traffic was “too backed up.” He said he had no idea people would camp out overnight.

“I spoke with a man on the phone who asked if he should wait in line overnight and I told him it really wasn’t that serious,” Dunkin said. “But then he told me he lost his job. He needed the free food, and it is that serious.”

Dunkin and Farm Share are working on “sensitive dates” for future events, he said, but are hoping to hold another giveaway in two weeks. Some technicalities have to be sorted out, like finding a new location to prevent vehicle congestion. 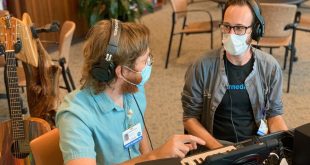