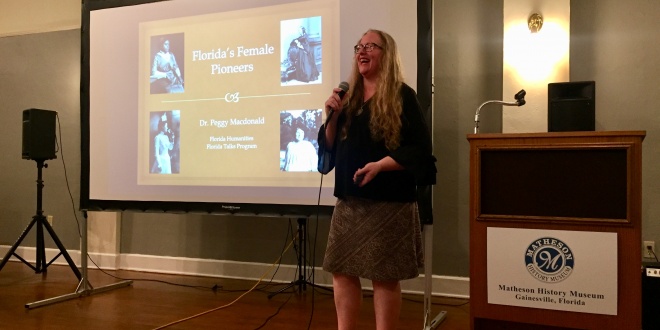 Macdonald, who has a doctorate in American history, served as the executive director of the Matheson History Museum from 2015 to 2019. She is currently an adjunct professor at Stetson University and Indian River State College.

Women honored in the speech included Dr. Esther Hill Hawks, who ran the first free racially integrated school in Florida and served as a physician during the Battle of Olustee, the only major Civil War battle that took place in Florida.

Marjorie Harris Carr was also honored during the talk. Carr, the self-described “housewife from Micanopy,” was an American environmental activist that led a coalition of activists in a battle to protect and restore the Ocklawaha River for 35 years.

Carr was the focus of Macdonald’s first book, which sparked her interest in other influential women in Florida’s history.

Carr along with Marjorie Kinnan Rawlings will be featured in an upcoming exhibit at the Matheson titled “Trailblazers: 150 years of Alachua County Women,” according to Kaitlyn Hof-Mahoney, the curator of collections at the museum. The exhibit, which opens March 24, will feature 11 remarkable women from Alachua County history.

Jayne Hargrave, one of about 50 attendees at the event, was inspired by the women throughout Florida’s history that Macdonald spoke about and hopes that her daughter will be inspired by them too.

“I realized about several people I want my daughter to look up, including Marjorie Carr,” Hargrave said.

Hargrave’s daughter is interested in zoology like Carr who received a master’s in zoology from The University of Florida and was the nation’s first female wildlife technician.

Macdonald began giving talks about influential women in Florida’s history two years ago before deciding to write a book on the subject.

“At the end of each talk, there would always be someone who would say: ‘Where can we find the book?’ Macdonald said. “So, I realized that this was my next book.”

While Macdonald travels across the state giving presentations on Florida women’s history with the Florida Humanities Florida Talks program, she rarely gets to speak in Gainesville.

“It feels like home to be able to come back,” Macdonald said.

Cassidy is a reporter for WUFT News who can be reached by calling 352-392-6397 or emailing news@wuft.org.
Previous Attendance For UF Law Event About Hate Speech Sparse As Classes Move Online
Next ‘The Airplane Is Flying While Being Built’: How Those On UF’s Campus Are Adapting To Coronavirus Restrictions