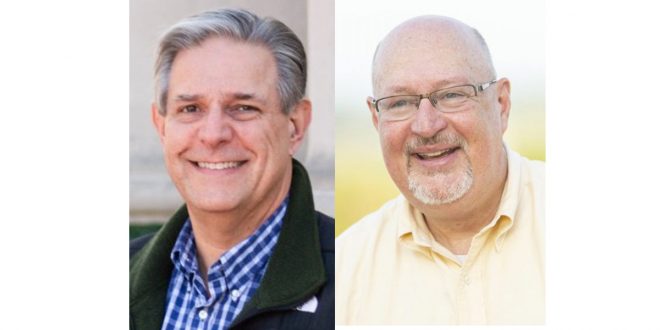 Registered voters in the City of Gainesville will decide on Tuesday, March 17, who will help make decisions in city government in the coming years.

Those who live in the city’s District 2 will decide between incumbent Harvey Ward and challenger David Walle.

Below is a short guide to each candidate to help you make a choice.

Walle, 55, has lived in Gainesville for 36 years and has a background in business and real estate.

“David Walle is someone who, like many, have had my gripes, my issues with the city commission over the years and decided, well, am I going to be just another person complaining or am I going to be part of the solution? And the best thing I can do is to give our neighbors and District 2 a choice.”

He believes his business background allows him to think through the unintended consequences of decisions in a way he thinks the current city commission is missing. He’s particularly concerned about unintended consequences of the proposed tenant bill of rights. Walle also said he would have approached the plastic straw ban differently by including incentives for retailers and restaurants to eliminate the use of plastic straws instead of creating a mandated ban on them.

Problems he wants to solve

Homelessness and substance abuse are particularly important to him. For example, he wants stricter law enforcement around panhandlers in city streets. He also advocates for residency limits for whom the city provides permanent housing and mental health resources.

He is separately focused on infrastructure, mental wellness and Gainesville’s emerging growth versus affordable housing issue.

His stated first priority if elected: “Looking at our operations to have a good workable rapport with our permanent city auditor to have clarity in the scope of our government and clarity as to proper funding and making sure that all funds are accounted for.”

Who’s given money to his campaign

Walle has loaned or written a check to his own campaign for more than $7,000 so far, with his remaining $1,400 or so coming from 13 other contributors. Among them are former Gainesville City Commissioner Todd Chase and former Alachua County Commissioner Susan Baird.

What his campaign spent it on

The bulk of his $7,500 in spending was $5,000 to campaign consultant Onefish Twofish Agency. He also spent several hundred dollars on printing, just shy of $400 to build his website and $50 on Facebook advertising.

A Gainesville native who graduated from Eastside High School, Santa Fe College and the University of Florida. He has three daughters in Alachua County high, middle and elementary schools. He was first elected to the Gainesville City Commission in May 2017 and has a background in nonprofit organization management and fundraising.

His stated accomplishments from his first term

Why he’s running for a second term

Ward said he is aware of two legislative items he hasn’t been able to accomplish as a city commissioner: a ban on plastic bags (blocked by a 2019 state law) and any new city ordinances regulating firearms (also blocked by an existing state law that Gainesville is challenging in court).

He also wants to address poverty and the city’s income gap, increasing GRU rates and property taxes, and the ongoing transition of Dignity Village into Grace Marketplace to help the area’s homeless.

“Somebody comes here and needs help — whether they’re born and raised here like me or whether they just found themselves here — I think we have an obligation to be helpful,” he said. “Not many other north central Florida counties have homeless services, so the city and county are here to help.”

Who’s given money to his campaign

What his campaign spent it on

About $2,500 of his $6,600 spent so far went to Katy Burnett for office space and campaign consulting, with another $1,200 to Alta Systems for printing. He paid local designer Neesha Anderson $210 to build his website.

Editor’s note: Audio interviews have been edited for clarity and brevity.