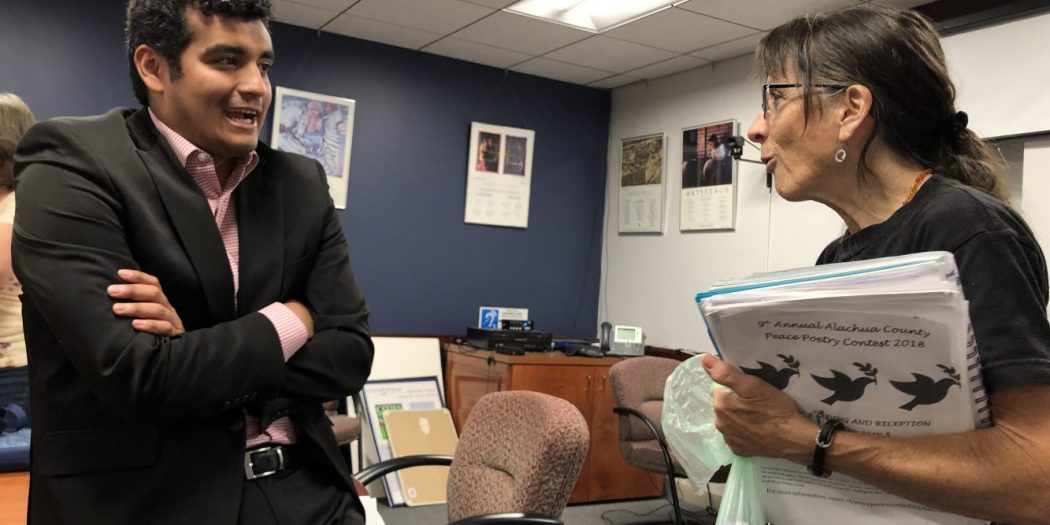 City Commissioner David Arreola and Alachua County Labor Coalition Membership Coordinator Sheila Payne chat after the subcommittee meeting May 15. Payne holds a bag of her organization's buttons that she gave away at the meeting. (Danielle Ivanov/WUFT News)

Above: Hear a version of this story as it aired on 89.1 WUFT-FM.

Mold grew in Mary Vasilevsky’s first apartment, and in another building when the one above hers once flooded and left water raining down onto her belongings.

Vasilevsky, 24, came to Gainesville from Palm Coast, near Miami, in 2012 to study environmental science at the University of Florida. She is now pursuing a master’s degree from UF in sustainable development practices.

Wanting to experience all sides of town from the community perspective, Vasilevsky chose not to live in a residence hall. But too often she found unsuitable housing.

“These apartment complexes aren’t necessarily evil,” she said, “but there are dirty units. With a system like that, you’re bound to have public health hazards.”

Vasilevsky is one of many local residents with rental safety and affordability on their minds.

A Gainesville City Commission subcommittee led by Commissioner David Arreola has been discussing rental housing regulations since December. Last week, the subcommittee discussed seven proposals to recommend to the commission:

The subcommittee plans to finalize its recommendations at its next meeting, 3 p.m. on Tuesday in City Hall. It will also discuss creating a local minimum standard for rental housing – both short-term and long-term – and an energy efficiency rating for individual rental units.

Local residents, landlords and real estate agents crowded a basement conference room in City Hall for the three-hour meeting on May 15.

Sheila Payne, membership coordinator for the Alachua County Labor Coalition’s Renter’s Rights program, handed out palm-sized orange buttons that read “safe and affordable housing for all.” She shared with the subcommittee and audience her experiences living in the community.

“I tutor a little boy,” she said, “and his mom can’t afford heating or air-conditioning.”

Because their house is poorly insulated, Payne said, the summer heat seeps in and causes mold to grow. It smells despite their best cleaning efforts, but the family is too afraid to report code violations.

“If you’re low income on the east side of town,” Payne said, “you’re not calling anybody because you’re afraid your landlord won’t renew your lease.”

Payne said more Section 8 housing is one of Gainesville’s biggest needs. Low-income residents can apply for Section 8 vouchers and become eligible for federal money to help pay their rent. But many landlords don’t accept them, leading too many renters to face being homeless.

Some real estate agents and landlords expressed concerns that having to meet higher regulations could cause rent prices to increase – and thus defeat the purpose of affordable housing.

“What you’re saying is,” Payne said, “if you’re poor, you have to live in substandard housing.”

One landlord, Pat Abbitt, said she has been renting homes in Alachua County for 18 years. Landlords, as she put it, are “being painted in a bad light.”

“I’m not a slumlord,” Abbitt said. “I’ve been at many of these meetings. I think there are a lot of people from the landlord side who have felt a little demonized.”

Pat Abbitt is a radiologist at UF Health Shands Hospital. For 18 years, she’s been a landlord in Alachua County. Play the video to hear her views on Gainesville’s rental housing climate.

Danielle LaFerrier, general manager at The Wynwood in southwest Gainesville, said in an interview that replacing old air conditioning units could cost up to $5,000 per unit. That could affect the complex’s budget and ultimately raise rent prices, LaFerrier said.

“At the end of the day, it’s business – and it’s competitive,” she said.

Nancy Deren, another landlord, said she isn’t concerned about the cost of improvements.

“Not at all. No,” she said when asked if her rents would rise. “I have structured things, structured my life in order to be able to build reserve funds that I can deal with things immediately.”

Alfredo Ortiz, 19, a sophomore philosophy major at UF, said he also supports the subcommittee’s recommendations. He and his family moved to Gainesville in 2017 after Hurricane Maria destroyed their home in Puerto Rico.

They first moved into The Polos of Gainesville, a complex at 2330 SW Williston Road, because of its proximity to PK Yonge Developmental Research School. But they soon regretted signing their one-year lease because of frequent flooding and pest problems, he said.

“It was not a fun experience to wake up to a cockroach crawling on your chest,” he said.

Kimberly Washington, a leasing specialist at The Polos, said pest control visits the complex every Tuesday. The service is included in the cost of rent, so tenants don’t pay extra for sprays.

Other tenants elsewhere said they’re happy with their rental housing in the city.

Tasha Garwood, 22, a part-time counselor at Girls Place Inc., has only lived in Gainesville for nine months. She moved here to be near her family, she said. Garwood lives in a three-bedroom unit at the LUX13 Apartments across from Gainesville High School. She dreams of having her own place, but plans to renew her lease and stay with her two roommates to save money.

Below: Carolyn Ross has lived in Gainesville her whole life. Here, she gives a glimpse of her rental home on the northeast side of town.

Danielle is a reporter for WUFT News who can be reached by emailing news@wuft.org or calling 352-392-6397.
Previous As Employment Rises, African American Transplants Ride Jobs Wave To The South
Next Florida Executes Serial Killer Bobby Joseph Long After 34 Years On Death Row