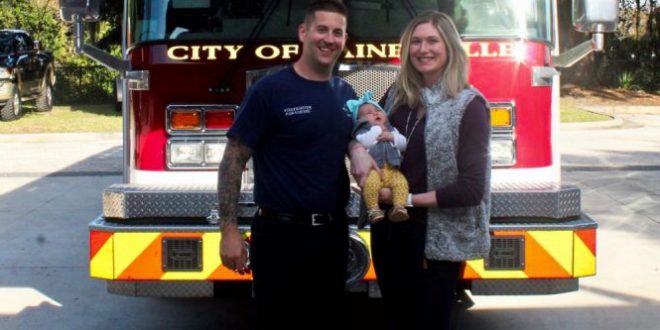 Around 8:40 a.m. one recent morning, Gainesville Fire Rescue Station 2 got its first call of the day – and Brian O’Connell’s first call in a month.

O’Connell and three other firefighters quickly put on their gear and rushed into a truck. While driving, the firefighters received details about the call and hollered to get their energy up.

A tanker truck had collided with an SUV on U.S. 441 near State Road 121. The impact caused the tanker to overturn and spill 1,200 gallons of fuel. Multiple Gainesville Fire Rescue units, hazmat teams and the Alachua County Environmental Protection Agency responded.

“I’ve only been back four hours and this happens,” O’Connell, 32, said.

“You must be our lucky charm,” Lt. Westin McQueen said.

O’Connell’s absence was due to parental leave he took to be with his 7-week-old daughter Riley.

The city recently ratified amendments to its agreement with the International Association of Fire Fighters. They include a 4% minimum pay raise and 12 weeks of paid parental leave. O’Connell is among the first three firefighters to receive the new leave benefit, and the first at his station.

The pay increases will be paid retroactively beginning with the Oct. 7 pay period and implemented over the next two fiscal years, said Shelby Taylor, the city’s communications director. Taylor said approximately 170 employees, which includes all members of the IAFF bargaining unit, will benefit from the agreement change.

The previous average salary ­­– not including the 10% paramedic supplement, education supplement or assignment-based supplement – was $52,826, Taylor said. The average will increase to $54,609, she said.

“This is the largest wage agreement and most significant expansion of leave benefits in at least the last eight years,” Taylor said.

Taylor said the driving force for the wage negotiations was a study commissioned by the city that looked at existing compensation, including the living wage rate and benefits plans. She said the goal was to ensure all city employees were paid competitively with peer employers elsewhere.

Tracey Higdon, president of the Gainesville Professional Firefighters chapter of IAFF, said the amendments were in response to a city-commissioned study. He was the union’s lead negotiator and said it took seven months for both sides to reach a deal.

Higdon said while they will be more competitive, it could take three years for current fire rescue members to have the higher salaries.

“Obviously, we wish we could have done it, and made the jump to where we needed to be now, but we understand it takes a lot of money, and that’s a big ask,” he said. “At least there’s a plan to get us there.”

Higdon said parental leave was something the city already had in place with other employee bargaining groups.

“We were one of the last groups to get to the table to talk about it,” he said. “It’s a huge benefit if you’re going to have a child.”

Beyond Florida, paid parental leave has become a national discussion. Last week, the Wall Street Journal reported that Congress and the White House were close to a deal regarding a bill that would provide more than 2 million federal workers paid such leave.

O’Connell said prior to the contract change, Gainesville firefighters had to use sick days in order to stay at home with their new children. He returned to work six weeks after his wife Stephanie, 30, and him felt they were settled enough for him to do so. He said it was good to know that had there been any issues following Riley’s birth, he could have had time to be with his family.

“It’s kind of like a safety net built in,” O’Connell said.

Stephanie O’Connell said it was helpful having her husband home. She works as a physician assistant at UF Health Shands Hospital and gets six weeks of maternity leave.

“He has been helpful not only with things I couldn’t do around the house, but also bonding with the baby, which is something I feel like dads not always get the chance to do,” she said.

Stephanie O’Connell added: “Being married to a firefighter, we spend a third of our nights alone. So having him home when Riley’s up all the time at night – and not having to deal with that alone – has been so important.”

Allison is a reporter for WUFT News who can be reached by calling 352-392-6397 or emailing news@wuft.org.
Previous City Of Hawthorne Prepares For Long-Desired Community Recreation Park Additions
Next The Point, Dec. 19, 2019: What A New Gainesville Firefighters’ Contract Means To Their Families