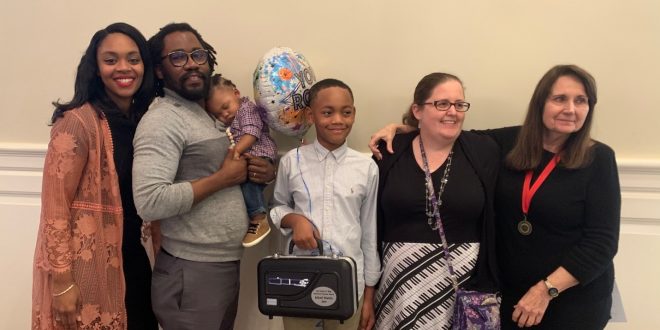 Jakari Harris proudly holds his clarinet alongside his family, band director and Karen Pearce. Pearce is a clarinet player on the Gainesville Community Band and was responsible for choosing Harris as this year's student-winner. (Sofia Mingote/WUFT News)

Following a competitive selection process, 11-year-old Jakari Harris walked up to the front of the First Presbyterian Church in Gainesville on Sunday evening to accept a brand-new Jupiter clarinet.

Each year during the Captain James B. King Veterans Day Concert, a clarinet is presented to one Alachua County middle school band student.

King, a late member of the Gainesville Community Band, served as principal clarinet and assistant conductor of the United States Marine Band — known as “The President’s Own” — under the administrations of Presidents Truman, Eisenhower, Kennedy and Johnson. He died in 2006. The clarinet was donated in King’s memory by the retail store Music & Arts.

Karen Pearce, Gainesville Community Band Clarinet player, chose which student-nominee would receive the clarinet. Pearce has been playing the clarinet since 1958. She knew King personally when he took on the roles as her mentor and teacher when she showed interest in joining the Gainesville Community Band. She started out in the band on third clarinet and then eventually moved up to first clarinet and played alongside him.

Pearce said that after meeting Jakari she felt confident she and Joy King, the captain’s wife, had made the right decision.

“He seemed like a young man who was very, very eager to learn and was proud when he made some progress. And it also seemed that he had a need, he didn’t have a clarinet of his own and was using one at the school,” Pearce said.

With his new instrument case at hand, Jakari seemed eager to go home to start practicing. He said music is a way for him to communicate with others.

“On the first day of school before I think he even knew what his schedule was, he had his clarinet mouthpiece in his hand, and he was ready to go,” Beres said. “I always tell my parting eighth-graders that whatever you do, always find a way to make music part of your life.”

According to Beares, he had trouble with his hand placement at first, but persistence paid off.

Beres said the instruments at the middle school are worn out, so Jakari’s new clarinet will help him grow as a musician.

“It makes such a difference for them to have a quality instrument to play on it makes it so much easier for them to be able to be successful and to feel that success which will motivate them to continue growing,” Beres said.

Jakari moved from Birmingham, Alabama, a little less than a month ago, and Elizabeth Norwood, his mother, said music has helped with the transition to a new school and community.

“He’s very ambitious. So, I’m sure that played a role in it, being very ambitious and ready to just go out there and get it,” Norwood said. “I think it (music) helps a lot. Just having something to focus on and just kind of take your mind off of the friends you left behind and things like this. So, I think it’s helped a lot in his transition.”

Norwood said their first interaction with the Gainesville community was a welcoming experience, especially for her son.

“The atmosphere was definitely welcoming and patriotic,” Norwood said.

Sofia is a reporter for WUFT News who can be reached by calling 352-392-6397 or emailing news@wuft.org.
Previous The Point, Nov. 11, 2019: Hammett L. Bowen Jr. Has An Elementary School Named After Him. Here’s His Family’s Story On Veterans Day
Next Gainesville Unveils Two Markers Commemorating Memorial Mile