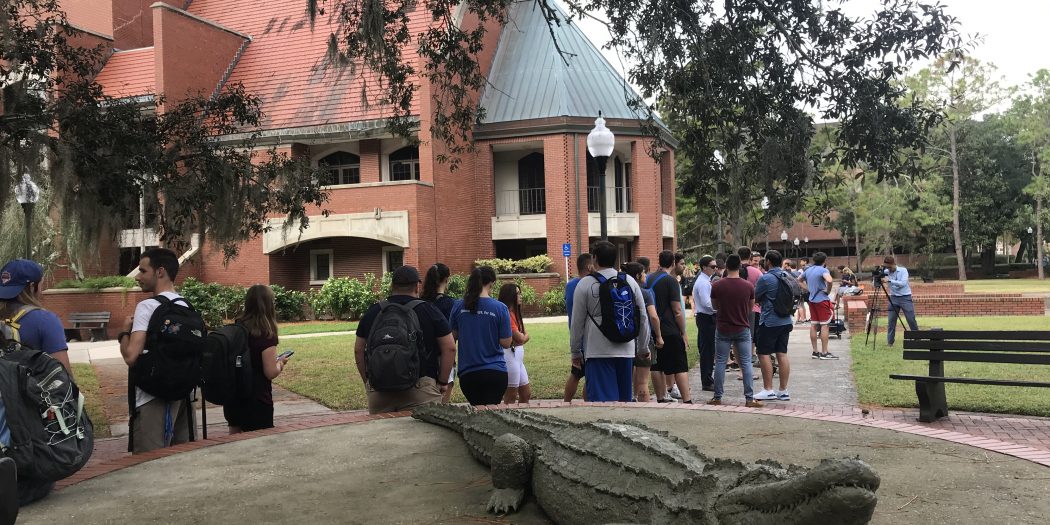 Some students fervently shook their heads “no,” as others happily accepted stickers from protesters outside the University Auditorium box office at the University of Florida on Tuesday.

The ACCENT Speakers Bureau distributed free tickets to students for an event featuring Donald Trump Jr. and Kimberly Guilfoyle, a senior adviser on his father’s reelection campaign, at the auditorium on Thursday. The 843-seat venue sold out in four hours, according to Henry Fair, a senior political science major and chair of the speaker’s bureau.

ACCENT, a part of the UF student government, is paying Trump Jr. and Guilfoyle $50,000 from student activity fees. It has not been made public how the two of them will split the money.

The bureau’s Facebook event page characterizes Trump Jr., an executive vice president at the Trump Organization in New York, as “an innovator and leader in today’s young business world.” The page also states that the son of the U.S. president has a “much-anticipated book, “Triggered: How the Left Thrives on Hate and Wants to Silence Us,” set to be released on Nov. 5.

Guilfoyle was one the most recognizable faces on Fox News Channel during her 12-year tenure there and author of the book “Making the Case: How to Be Your Own Best Advocate.”

Five hundred feet away from the box office, organizers of the #CHOMPTRUMP protest against the event held a news conference in the university’s Plaza of the Americas.

In addition to calling for the ACCENT event to be canceled, protesters contend the $50,000 should be allocated to other student government organizations.

“ACCENT’s excuse is that Trump Jr. is going to be speaking about entrepreneurship,” said Evelyn Graham, 24, of the Gator Chapter of the National Association for the Advancement of Colored People, “when in reality what has he really done except get handouts from his father?”

Laila Fakhoury, president of the Students for Justice in Palestine chapter, compared the event this week to when her organization hosted U.S. Rep. Rashida Tlaib, D-Mich., at UF in April.

“UF gave us no funding to host such a valuable event,” said Fakhoury, 21, of Ocala, a senior majoring in both family youth community sciences and philosophy. “UF didn’t spend money to secure us even though Rashida constantly has targets and threats surrounding her life.”

Another protest organizer, William Klein, 21, of Sarasota, told WUFT the protest is not just an objection to what he called Trump Jr.’s “hateful rhetoric.” Klein and other protesters said political speech should not be subsidized by student fees.

“For the university to hand Trump Jr. a $50,000 check while his father is running for reelection shows so many ethical concerns that really has nothing to do with free speech,” Klein said.

UF released a statement last week supporting ACCENT’s right to invite whichever speakers it chooses. Noting a commitment to “ensuring that a wide variety of viewpoints are heard on campus as well as to protecting the First Amendment rights of all those in attendance,” the statement adds of Trump Jr. and Guilfoyle: “We will welcome them to campus.”

“It’s a little ridiculous to have these top 7 public school banners hanging behind the camera on ‘College GameDay’ – when this is going on behind the scenes,” said Hyden, referring to the ESPN program that was hosted on campus before the Gators game against Auburn on Saturday.

“People have this misconception that we want campuses to be a dominantly conservative place,” Leonardi said. “We want every viewpoint to be represented because we have deeply held convictions on the first amendment and the Constitution.”

Both dissenters and supporters stood in line to get tickets to see Trump Jr..

Saying he “hates barriers to free speech,” Corey Hermida, 21, a political science major from Melbourne, said protesters should be more open to learning about Trump Jr.’s opinions and the reasoning behind them.

Joshua Gerstenfeld, 19, of Pembroke Pines, who is majoring in both computer science and criminology, said he wanted to attend the event to learn more about the conservative practices of people older than millennials.

“Political discourse is always a good idea, but I’d prefer people to engage in healthy conversation instead of protest,” Gerstenfeld said.

WUFT-TV’s Quan Mcwil produced this report on the event:

WUFT-FM’s Reagan Fink produced this report on the event:

Molly is a reporter for WUFT News who can be reached by calling 352-392-6397 or emailing news@wuft.org.
Previous Dog Racing Supporters Challenge Constitutionality Of Amendment 13 In Federal Lawsuit
Next University of Florida Leaders Honor Former Provost David Colburn